DaddyBigBucks said:
In today's installment of "The NCAA is Weird", for most stats they rank teams by average per game, not so for first downs. Because of this, Ohio State appears to have lost first place in this metric this week, while holding its spot in things like Scoring Defense (#1).

After their game with Wofford, Clemson holds the top spot in first downs according to the NCAA, with 238 for the season.

However if First Downs were ranked the way other stats are ranked, the tigers would be 4th with 26.444 per game and Ohio State would still be #1 with 26.875 per game.
Click to expand...

I'll that after our next two games we'll be back in the top spot even by the season total metric. Most likely will gain the top spot in scoring offense, too...
Upvote 0 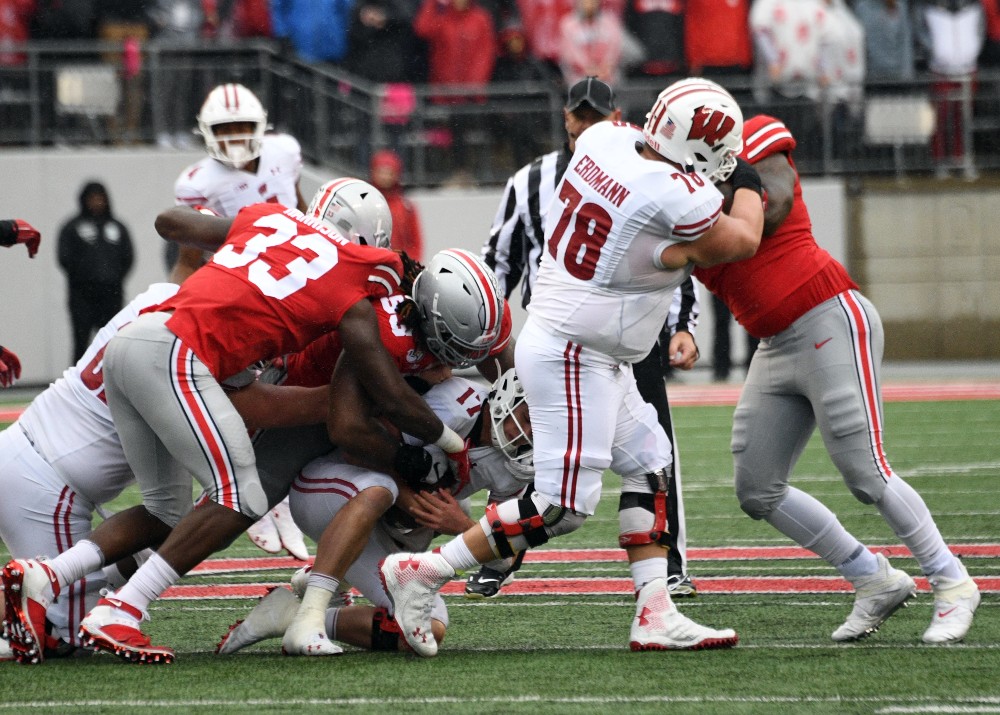 Every now and then it makes sense to take a look at where the Ohio State football team stands in relation to the rest of the nation.

The rankings are one thing — and the Playoff Rankings will be out in a couple of days, but it’s always interesting to see just how much production the Buckeyes are responsible on both offense and defense.

With the Ohio State offense and defense both rolling at unprecedented paces, the need to take stock and appreciate what they’re doing right now is even more apropos.

Sitting at 8-0 for the first time since 2015 is an accomplishment for this program, so why not spend a few minutes taking a brief victory lap?

For instance, the Buckeyes are scoring 48.3 points per game, which is third in the nation behind Oklahoma (49.3) and Alabama (48.6). Alabama and Ohio State have each scored 52 touchdowns this season, which is more than anybody else in the nation.

The Buckeyes are scoring 48.3 points per game and they haven’t even played Maryland and Rutgers yet. The OSU school record for scoring is 45.5 points per game, accomplished during the 2013 season. After those first 10 games this year, the numbers may dip a bit as the Buckeyes take on Penn State, Michigan, possibly a Big Ten Championship Game opponent, and then one or two other talented defenses.

Ohio State is fourth in the nation in rushing, averaging 284.3 yards per game on the ground. They are tops among Power 5 teams, however, with Boston College being the next closest at 282.3 yards per game. Against conference opponents, the Buckeyes are rushing for 308 yards per game, which is 55 more than anybody else in the Big Ten (Minnesota).

And we’ll see if it holds up, but Ohio State is currently averaging a school record 7.17 yards per play, which is .03 ypp ahead of the current best.

Defensively, the Buckeyes lead the nation in points allowed, as opponents are scoring just 7.9 points per game against this Ohio State defense. They have allowed just six touchdowns this season. No other team in the nation has allowed fewer than nine.

Among teams that have played eight games this season, Ohio State has allowed three fewer touchdowns than any other defense in the nation.

As good as the Offense has been the Defense is playing lights out. Stats are impressive on both sides of the ball.
Upvote 0

Two teams are in the top 5, nationally, in both scoring offense and scoring defense.

Playing in the All Cupcake Conference, Clemson is #5 in scoring, #3 defensively.

There has been speculation that there is probably a bigger difference in point differential between #1 and #2 in that metric than between any two adjacent positions.

Turns out that speculation is right...

UMass is ALMOST a full TD behind NMSU at the very bottom of the rankings. The only difference of > a TD is between #1 and #2
Reactions: 1926Buckeyes and brodybuck21
Upvote 0

What happened to my ¤cash?

Steve19 said:
Well, I understood what you said and I think you are dead right. There is no excuse for crap models with so many options in R these days. Given the number of parameters to be estimated and what he has been saying to you, I thought that another option might be that he was fitting a multilevel latent class regression model. After reading this, I was wondering if perhaps one way to handle the parameters to sample size issue might be to fit a multilevel partial least squares model.

This is something that I also want to play with in retirement. I would be pretty cool if we had a BP model.
Click to expand...

To continue the discussion, apparently in a more suitable place...

Yes, parameters relative to observations could be problematic. That’s why I gravitated to something like an XGBoost ML model. I’d probably start with very shallow tree depth (max 3) and a crap ton of trees and let the XGB ensembling do the heavy work.

Have also considered a hierarchical model here as well. I think that there are some natural hierarchies that exist that could reduce the error. The Bayesian model that I mentioned earlier was a hierarchical model as well but not in a traditional sense. Essentially the upper model (multivariate multiple regression) was used to predict the lower model’s beta weights. The scores resulting from the upper model were then used as a natural conjugate prior on the lower model (multinomial probit) betas. Only chose probit (as opposed to logistic) because of the well behaved math of the distribution of the betas relative to the prior.

Anyhow, the upper model is where I think that things could be interesting in that the non traditional (and potentially correlated with the lower model predictors) can be added. Alas, I’m not sure if I have that code laying around anymore, and I certainly don’t have access to SAS/IML anymore. Pretty sure that I’d be able to find someone who has packaged it in R or Python though.

Bringing it back to tOSU, Greg Allenby at Fisher was involved in the original development of that model when he was a Ph.D. student at U of Chicago under Peter Rosi. We got a copy of their paper prior to publishing and were using it in business right as it went to print. Fastest I’ve seen anything go from academia to industry in my career.

Any ideas on where to get reliable data for something like this? I’d be very interested in giving this a go if you’re game... but I will say, I’m working on a crap ton of ML / AI / ANN pipelines for standardization for work. I’d probably start with those... but it would be interesting to see how they all perform relative to each other and what a potential ensemble model would look like.

Let me know if you’re game. If costs for the data aren’t terrible I’d throw some cash at it for fun.
Reactions: BB73 and Buckeyeskickbuttocks
Upvote 0

If there’s a way of getting the data we’d need without a web-crawler, I haven’t seen it. The problem with web-crawlers is the tedium of checking the data for accuracy. If we can find an easier way, I’d consider it
Reactions: Steve19, sparcboxbuck, brodybuck21 and 1 other person
Upvote 0

One direction or another from Kansas City

Geek talk is awesome. You nerds pull this off and I'll reveal the truth about me not being everyone
Reactions: charlohiottean, Fungo Squiggly and brodybuck21
Upvote 0

Or I could just log back in as dbb and pretend I never said that...
Reactions: Fungo Squiggly, sparcboxbuck, brodybuck21 and 1 other person
Upvote 0

One direction or another from Kansas City

DaddyBigBucks said:
Or I could just log back in as dbb and pretend I never said that...
Click to expand...

What happened to my ¤cash?

DaddyBigBucks said:
If there’s a way of getting the data we’d need without a web-crawler, I haven’t seen it. The problem with web-crawlers is the tedium of checking the data for accuracy. If we can find an easier way, I’d consider it
Click to expand...

Meh, I’m really lazy and would rather spend money than my time (because I’d rather do something positive for others by coaching). I’d start with Stats Inc. Lemme see what I can see.
Reactions: Fungo Squiggly
Upvote 0

Buckeyeskickbuttocks said:
Geek talk is awesome. You nerds pull this off and I'll reveal the truth about me not being everyone
Click to expand...

Geek talk is infinitely better and more enjoyable than lawyer-speak. I still love ya though, but not like the lumber-lover loves lumber. Eh, @Fungo Squiggly ?
Reactions: Buckeyeskickbuttocks, BB73, brodybuck21 and 1 other person
Upvote 0

Mortal enemy of all things Bucky

muffler dragon said:
Geek talk is infinitely better and more enjoyable than lawyer-speak. I still love ya though, but not like the lumber-lover loves lumber. Eh, @Fungo Squiggly ?
Click to expand...