John Frank left the NFL at the height of his career to become a doctor.

For starters, John Frank is not your average ex-NFL player. The former San Francisco 49ers tight end turned plastic surgeon is now setting his sights toward the 2006 Winter Olympics, where he plans to serve as a member of the Israeli bobsled team.

A second round pick by San Francisco in the 1984 NFL Draft, the Ohio State alum initially served as a backup behind Russ Francis. Frank soon gained a reputation within the NFL for his fierce, unrelenting play and as a tenacious blocker.

Four years into his career, Frank became a starter and progressed to the point that Head Coach Bill Walsh once said he was “probably the most underrated of any player we ever had.”

“He was one of those guys that just gave 110 percent effort all the time,” quarterback Joe Montana recalled. “He was undersized as a tight end, but he was just a feisty fighting guy. He never gave up on you and he worked hard all the time, both on and off the field.”

In his five years with the team, Frank won two Super Bowls and recorded 65 receptions for 662 yards and 10 touchdowns. In the waning moments of Super Bowl XXIII, Montana tossed a five-yard touchdown pass to Frank. Ironically, that would be the last catch of his career.

“Not to take anything away from football, it’s a great sport,” Frank said after his retirement. “I’m happy to have played, happy to have grown up in an area where football was important. I just didn’t want it to become the focus of my life. I wasn’t searching for that. There are more things out there.”

Even though Frank retired at the peak of his playing career, the move didn’t surprise many. During each offseason with the 49ers, Frank retreated to his home in Columbus, OH in order to take pre-med classes at Ohio State University. As a former three-time Academic All-American with a 3.8 grade point average, Frank believed he was losing his academic edge.

“It came to the point that I needed to be a full-time med student,” Frank said. “I was afraid of being too immersed in the NFL. I was afraid I’d never have the opportunity to come back (to medical school).”

“Some players use their brains when they think about their post career and others go on until we can’t take it any more,” Montana stated. “But John knew what his calling was and what he wanted to do. I think it’s great when people have that kind of foresight.”

Frank completed his medical degree in 1992 before embarking on a six-year residency at Loyola University in Chicago. In 2000, he opened up his own private practice in San Francisco, specializing in facial plastic surgery and hair restoration.

“Three-quarters of my clients for the restorations are men,” Frank said. “That’s very gratifying. It’s nice to help somebody turn back the hands of time.”

Frank’s ever so interesting life doesn’t stop there. In the 2006 Winter Olympics, he plans to bump and skid along an icy track at speeds reaching 100 MPH as the brakeman for the Israeli bobsled team.

Frank, along with teammate Aaron Zeff, who’s a former U.S. fighter pilot and current San Francisco businessman, both are of Jewish descent and have received permission from Israel to represent the country in the upcoming Games.

The two have been competing in the ‘B’ circuit on the America’s Cup Tour for the past two winters. If they succeed and qualify for the Winter Olympics, it would be the first sport other than ice skating that had Israeli representation.

“It’s scary,” Frank explained. “It’s exhilarating. It’s challenging and it’s fun. It encompasses so many emotions. From an athletic perspective, it’s really gratifying and rewarding to be competing again.”
Click to expand...

Bookie
Amazing stuff, and a great find. I'll have to somehow remember to look out for him in two years.
Upvote 0

It's hilarious how retarded some of these sports writers are. John Frank didn't catch a touchdown pass in Super Bowl XXIII.
Upvote 0

biggest jerk i ever met in my life....but thats just my opinion of him....he made robert smith seem humble.....
Upvote 0

DiHard said:
biggest jerk i ever met in my life....but thats just my opinion of him....he made robert smith seem humble.....
Click to expand...

I didn't realize you were Palestinian...
Upvote 0

THINK, Before You Speak

Former College Pick'Em Champ
John was a very good player here, but 2X All Big-Ten just doesn't cut it. This is TOSU football guys. NO way is John the 46th best we've ever had here.

Of course, just my opinion.

Best of the rest
John Frank

Four-year letter-winner (1980-83), three-year starter and two-time All-Big Ten selection. His 121 career catches are the most for an OSU tight end.

Frank is roundly considered the best tight end in Ohio State history, but his pro career was cut short -- by his own doing. After winning two Super Bowls with the 49ers, Frank retired from football in 1988 to return to medical school. He completed his degree in 1992 and now runs a hair-loss clinic in New York.
Click to expand...

Time and Change is a series at BuckeyeNation where we chat with former Ohio State athletes.

John Frank played for Ohio State from 1980-83, setting school records for receptions and yards by a tight end (121, 1,481). A two-time Academic All-American with the Buckeyes, Frank was an all-state star in high school. He attended Mt. Lebanon in Pennsylvania -- the same high school as Dallas Mavericks owner Mark Cuban. 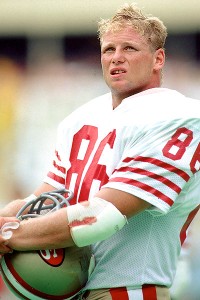 Selected in the second round of the 1984 NFL draft by San Francisco, Frank went on to win two Super Bowls with the 49ers.

He made a key catch in San Francisco's game-winning drive to beat Cincinnati 20-16 in Super Bowl XXIII, which remains arguably one of the best Super Bowls.

After a five-year stint as a professional and at the height of his pro career, Frank left the 49ers to pursue a degree in medicine. Frank, now 50, received his doctor of medicine degree from Ohio State in 1992 and is currently a hair restoration surgeon at the Anapelli Hair Clinic in New York City.

With offices in New York and Worthington, Ohio, Frank has performed nearly 3,000 hair transplants. He is also an assistant professor of clinical otolaryngology in Columbia University's College of Physicians and Surgeons.

BuckeyeNation caught up with Frank and talked to him about his unique career, playing for Earle Bruce and his thoughts about the Buckeyes.

BN: How did the path from Ohio State to the NFL lead you to hair restoration surgery?

Frank: From Ohio State it went through the Ohio State College of Medicine. From there it went to a residency in ear, nose and throat in Chicago. And then from there it went into practice for a little bit and then it went to a fellowship at Columbia in New York, and plastic surgery, and I'm now focusing on hair and scalp surgery. I'm a head and neck surgeon. I just started to take an interest in hair. I was good at it. I found a niche and stuck with it.

BN: Earle Bruce was known as a fiery coach. What has he taught you that you have taken into everyday life?

Frank: Earle has taught me so much. Earle didn't really waver on his training regimen. Those are valuable lessons that stick with you.

Former 49er John Frank, now a doctor, tries to reconcile with the game

The throw is perfectly placed, the way all of Joe Montana's seemed to be back then. Low and away from the defense, it floats toward John Frank, who cradles the ball with his one good arm before being driven to the turf. Above him, the giant scoreboard clock at Joe Robbie Stadium counts down. With less than three minutes remaining in Super Bowl XXIII, the 49ers trail the Bengals 16-13.
Everyone remembers what happened next. Montana coolly leading the team down the field, pointing out John Candy in the crowd. Roger Craig churning his knees for a first down. And, most famously, John Taylor leaping through the back of the end zone with 38 seconds left to finish a remarkable 11-play, 92 yard drive.
If you're not a 49ers fan, however, you may not remember Frank's role in the game. How he caught two passes, made a number of key blocks and played with a fractured left hand. How he was the second to greet Taylor after the touchdown, wrapping him in his thick arms. How he was frozen in time by a photographer, thrust into the air by 49ers lineman and good friend Harris Barton, arm upraised in joy. But that's okay. That's how Frank wants it.
That day, January 20, 1989, should have been the pinnacle of Frank's career. After all, he was the starting tight end for the best team in football and had just won his second Super Bowl ring. At 26 years old, he was making $357,500 a year and due to make more. He was a fan favorite, beloved for his ferocious blocking and hard-nosed play. The quintessential "gamer," he'd played with broken ribs, a concussion and, now, a fractured hand. A year earlier, he was selected for the All-Madden team. Blonde and handsome, he was also quite popular among the women of San Francisco. He was, by all accounts, living the dream.
Frank wasn't so sure, though. That week, after the game, he drove back to his apartment south of the city. As his teammates celebrated, he mulled his future. Within a few months, he would make a decision that Bill Walsh would plead with him to reconsider. Steve Young would do the same. But for Frank, there was no going back. At age 27, in the prime of his career, he quit football.
Viewed in hindsight, his decision isn't entirely shocking, knowing what we know now about the toll professional football exacts on the human body. In 1989, though, things were different. This was an age when players worried mainly about knee injuries, not dementia. There were no long-term studies on concussions at the time, no media exposes. The idea that a starting tight end for a Super Bowl champion would quit the game seemed inconceivable, especially to Frank's teammates.
Then again, none of them understood the stakes like he did. None of them were training to be a doctor.
*****

4. JOHN FRANK, 1983
A Pittsburgh native, John Frank entered his senior year with one of the best resumés of any tight end in program history. He already had 840 yards, which would have been second-best career mark for tight ends in Ohio State history at that time. In his senior year, Frank made sure to solidify himself in the record books, recording 641 yards (No. 2 in program history) with 45 receptions (tied third all-time with his 1981 season).

Frank finished his career with the most career receptions and receiving yards by a tight end in program history and was selected to Ohio State's All-Century Team. He also attended medical school at Ohio State while playing in the NFL for five years, ultimately earning his medical degree in 1992.
Upvote 0
You must log in or register to reply here.
Share:
Facebook Twitter Reddit Pinterest Tumblr WhatsApp Email Share Link
Top