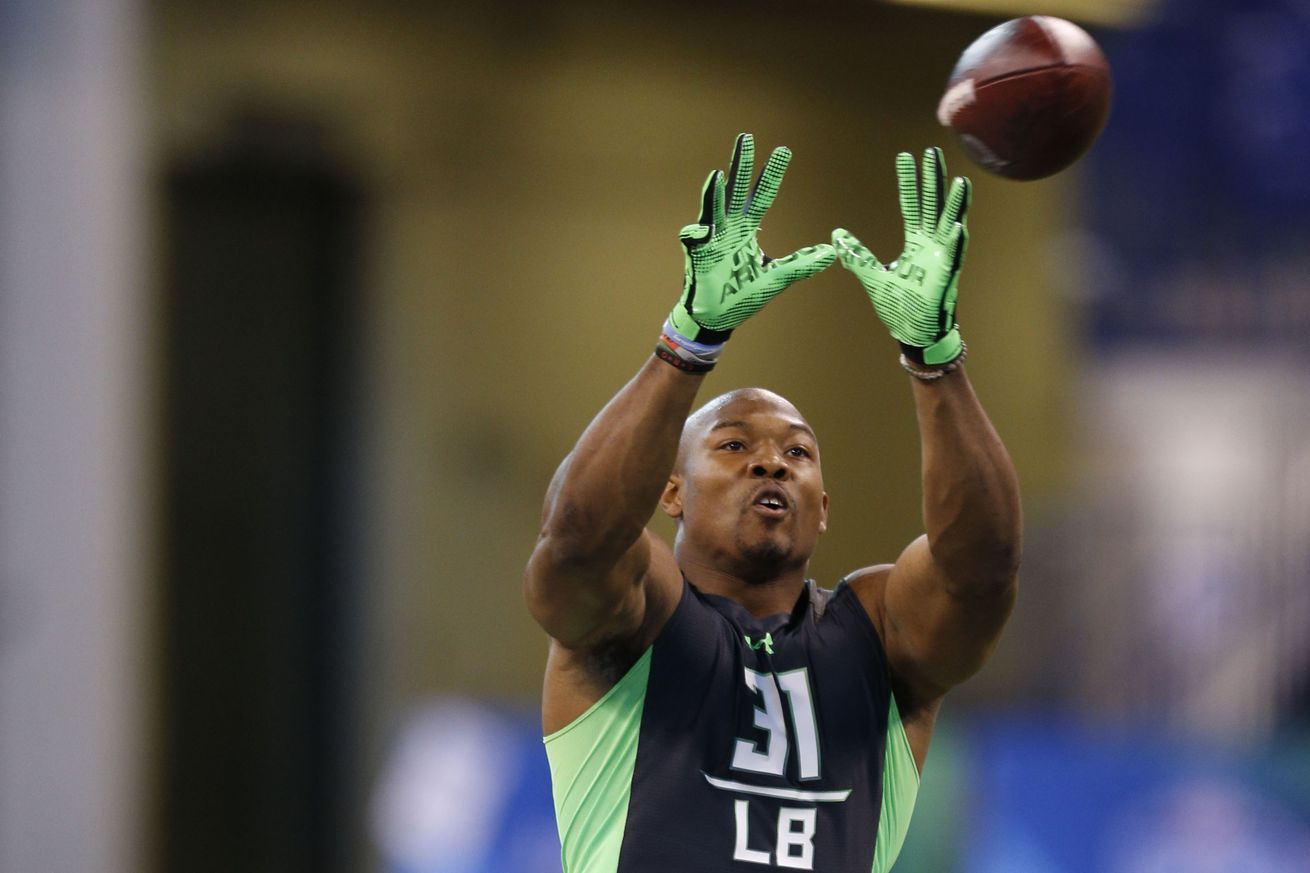 See what we think the future holds for the rest of the massive 2016 Ohio State draft class.

The 2016 Ohio State draft class is special and potentially record-breaking. Filled with possible top-five selections, first round picks and highly conveyed depth players, this class will rival the special Miami draft classes of the early 2000s and could be one of the greatest draft crops of all-time.

There are hundreds of mock drafts out on the internet for the 2016 NFL Draft. But where is the 2016 Ohio State draft class going to be selected? This mock is broken down into where the player should go, based on skill set, draft position, and team need. The second part are other realistic fits, based on team need.


Where he should go: Tennessee Titans, second round, No. 33.

One could argue that Vonn Bell's commitment on National Signing Day marked the beginning of Urban Meyer's recruiting impact at Ohio State. Bell, a five-star safety from SEC country, surprisingly signed and made his first impact play as a true freshman, picking off Clemson's Tajh Boyd in the Orange Bowl. He improved his following two seasons and became a true ballhawk in the secondary. Bell played more strong safety at Ohio State, but due to his range, he looks like a prototypical free safety in the NFL.

The Tennessee Titans released Michael Griffin and now have holes at both safety positions. They did sign former Arizona Cardinals' free safety Rashad Johnson; however, it was just a one-year deal and Bell would be able to challenge at either safety position. In today's pass-happy NFL, Bell would fit with any team who has a free safety vacancy.


Where he should go: New Orleans Saints, second round, No. 42.

Michael Thomas' numbers do not stack up with the other top wideouts, but it was what he did with his chances that makes him a special prospect. Thomas was once just a spring game all-star, then he turned into an excellent route runner, equipped with soft hands. The spokesperson of #Zone6 will bring confidence, route running and the ability to make plays in traffic as a number two or three receiver to the NFL.

The Saints once had an embarrassment of riches, but now outside of Brandin Cooks, they have no true number two option. Thomas would be able to come to New Orleans right away and fight against the likes of Willie Snead and Brandon Coleman for a starting job. He would benefit from playing with one of the top quarterbacks in the league and his ability to gain separation would turn him into one of Drew Brees' favorite targets. There are numerous teams with holes on the outside, including the Bengals, Browns, Texans, Vikings and Falcons, where Thomas would have a chance to be the number two or three guy.


Where he should go: New England Patriots, second round, No. 61

Starting 39 games, Joshua Perry has been a stable at the SAM linebacker position for Urban Meyer. Perry will bring high character, high intelligence and physical play to wherever he lands. He may not be as athletic as some of the top linebackers in this class, but he has a high football IQ and a nose for the football.

The Urban Meyer-Bill Belichick connection has not always worked out for Belichick, but Perry's character and talent fits a need for the Patriots. New England looks to be changing to a 3-4 defense, where Perry can kick inside next to Dont'a Hightower and challenge Jonathan Freeny for a starting spot. When Hightower and Jamie Collins went down last season, the Patriots' defense struggled. Perry will be able to pick up Belichick's defense quickly and climb the depth chart. If the Giants do not take a linebacker in round one, they could grab Perry right before New England's back-to-back picks at the end of the second round.


Where he should go: New York Giants, third round, No. 71

The former quarterback-turned-wide receiver has been all over the place in regards to his draft position. He made the wise decision by switching to wideout and got a year of much needed experience under his belt, but he is still extremely raw. Miller flew up draft boards and was seen as a possible first round pick after dominating Senior Bowl practices and now once the hype has settled, he is seen as a late-second to third round selection.

Miller is the best pure athlete out of all of the wide receiver prospects, yet he route running and hands are somewhat inconsistent. He will strictly be a slot receiver and he should fit next to Odell Beckham Jr. and Victor Cruz. He will not have to make an immediate impact and he can also learn from two of the better route runners in the NFL. Miller would succeed in the Giants' west coast offense, where he could run shallow crossers and slants. Other teams that would be able to accommodate Miller's skill set would be the Chiefs, Eagles, Bills and Bengals.


Where he should go: San Diego Chargers, third round, No. 66

In a watered down tight end class, Vannett's name has been thrown around as one of the first tight ends off the board. Underutilized at Ohio State, the tight end has a nice mix of size (6'6, 256 lbs), combined with soft hands and a willingness to block. It took him five years to start, but he made the most of it and performed well during the draft preparation season.

With Antonio Gates aging quickly and the departure of Ladarius Green, Vannett seems like the obvious TE2 in San Diego and the eventual heir to Gates' thrown. Vannett will bring some physicality to the Chargers' run game, while also giving Phillip Rivers another red zone target. The Packers and the Steelers would also make sense, as he could compete versus Richard Rodgers in Green Bay and he would provide better blocking than the newly acquired Green in Pittsburgh.

The former five-star recruit was viewed as a first round pick at various times throughout his excellent senior season, but his post-season arrest and subsequent Fiesta Bowl suspension have dropped Washington down the big boards. After playing the nose guard position to free up Michael Bennett in 2015, he slid over to Bennett's playmaking tackle position in 2016, and he was purely dominant.

Rex Ryan is not one to shy away from players who do not have a squeak clean record, and especially if that player can rush the passer. Washington fits Ryan's 4-3 attacking defense that is desperately looking for an interior pass rush to go along with Marcel Dareus. Uncharacteristically, Ryan's front-seven was not able to generate much pressure last season and adding a player with Washington's quickness and talent would sure up those issues. The Rams are a 4-3 team that would welcome Washington's interior depth and he has been linked to the Titans and the Cardinals throughout the draft process.


Where he should go: Pittsburgh Steelers, fourth round, No. 123

Powell was one of the few surprises to leave early; however, his length and ball-hawking abilities fit with today's NFL. Powell is not overly physical, but he will be a nice depth piece as a coverage focused free safety. Powell will bring energy and leadership, and he should fit into any locker room.

For as talented as the Steelers are at throwing the ball, they are quite the opposite at defending the pass. Powell would be able to learn from veteran free safety Mike Mitchell and get on the field in nickle or passing situations. The former Sugar Bowl Defensive MVP could also provide depth or challenge to start in Tennessee or Baltimore. Seattle could be a darkhorse for Powell to back-up the oft-injured Earl Thomas, while also learning from one of the best free safety's in the game.


Where he should go: Arizona Cardinals, fifth round, No. 168

What a difference a year makes. After leading the Buckeyes wins over Wisconsin, Alabama and Oregon, Jones was seen as a very intriguing NFL prospect and a first round lock. Scouts and draft pundits drooled over his Ben Roethlisberger-like size, rocket arm and mobility, and some even had him as the first quarterback taken in the 2015 draft. Then, Jones decided to not strike while the iron was hot and return to school to compete for the starting quarterback position. After an up-and-down senior season, Jones' stock has plummeted and he could be selected anywhere from the third to the sixth round.

Jones' best situation would be to sit for a couple of years behind a quality NFL veteran and learn how to become a professional, both on the field and in the locker room. The Arizona Cardinals would be a great fit for "12 Gauge," as he can sit behind Carson Palmer and learn the ropes. Palmer becomes a free agent in 2018, which would give Jones two years to study from one of the NFL's best quarterbacks. The Steelers and the Cowboys would be similar situations for Jones, but the Bills would give him a chance to start earlier, with quarterback Tyrod Taylor set to hit free agency in 2017.


Where he should go: Kansas City Chiefs, seventh round, No. 249

Due to the departures of wide receivers Michael Thomas and Braxton Miller, most Buckeye fans questioned why Marshall decided to turn pro, since he would have been J.T. Barrett's number one target in 2016. Marshall will be limited by his size, lack of straight-line speed and ball security issues; which is why he will be a final day selection, or a priority free agent. His biggest issue is that although he does do a few things well, he does not do anything great. Marshall will be drafted or signed by a team who lacks quickness from the slot and a punt returner.

The Chiefs have a little speedster in D'Anthony Thomas, but behind Jeremy Maclin, they have little-to-no depth at receiver. Marshall could compete right away in Kansas City as the fourth or fifth wideout and the starting punt returner. Washington and the Bengals are also two teams in similar situations as the Chiefs and they would be two other options to draft or sign the former Buckeye.

Schutt is in a tough situation after his final season was cut short by injury and his lack of an invitation to any scouting-based bowl game. The 6'2, 295 lb defensive tackle will be a priority undrafted free agent with some upside to stick onto a 4-3 team deep into training camp.

Those four teams are the most tackle-needy teams in the draft and Farris could serve as a training camp body.