tBBC What Would Woody Watch: Week 2

What Would Woody Watch: Week 2
Brandon Zimmerman via our good friends at Buckeye Battle Cry
Visit their fantastic blog and read the full article (and so much more) here 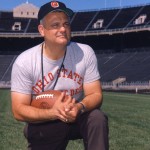 Holy crap! Week one of the college football season was absolutely amazing. From watching our Buckeyes dominate Bowling Green to Texas beating Notre Dame and all the SEC losses in-between, the “greatest opening weekend” definitely lived up to its billing! Unfortunately for us, as great as the first week was…the second week is that bad. It’s really a toss-up what is the most important game this weekend? Let’s take a look:

I’m going to give you a second to let that settle, I am leading things off with two teams who would be a great March match-up. Really, this is only for two reasons. First, it’s a Friday night game and there is nothing else you should be doing than watching college football. Second, take some time and enjoy watching Louisville quarterback Lamar Jackson. After struggling at times as a freshman in 2015, Jackson looked the part of elite athlete on Thursday as he combined for 405 yar LOUISVILLE, KY – SEPTEMBER 01: Lamar Jackson #8 of the Louisville Cardinals signals a first down during the game against the Charlotte 49ers at Papa John’s Cardinal Stadium on September 1, 2016 in Louisville, Kentucky. (Photo by Michael Hickey/Getty Images)


ds (286 passing/119 rushing) and eight touchdowns (6 passing/2 rushing). Then again that was against Charlotte. Will he be able to do that against the vaunted 2-3 zone Syracuse runs?

The Orangemen, coached by former Bowling Green coach Dino Babers, comes into this contest after defeating Colgate 33-7 on Friday. Led by their own sophomore quarterback Eric Dungey, who had a surprise guest before his first game, the Syracuse offense looks to be enjoying the new offense brought in by Babers. In his first game at the helm of this offense, Dungey threw for 355 yards and two touchdowns.

I think this game has the possibility of being a shoot-out as both offenses are capable of scoring some points. I think there is just too much unknown with the new Syracuse offense to think an upset is realistic.

Arkansas comes in riding high off of their hard fought 21-20 victory over high school powerhouse Louisiana Tech. It was just another game which shows how far ahead of the rest of college football the SEC is over everyone else. I mean, I laughed when people seriously said the SEC would get two teams in the playoffs this year…without a doubt it will be four! Whooo-Damn-Pig-Sooey! Sophomore running back Rawleigh Williams III, grinded out 96 whole yards on 24 carries against the vaunted front seven of the Bulldogs. Four yards (per carry) and a cloud of dust my friends, I’ll see you in New York Rawleigh!

I was so high on TCU coming into this season because I thought they would have the only real defense in the Big 12. They rewarded me by giving up 41 points to the Jackrabbits of South Dakota State. I’m hoping it was a one-time thing because I want to see Brett Bilema go down in flames at Arkansas. For those that haven’t noticed, TCU is quarterbacked by former Texas A&M star (for like three games) Kenny Hill. At one point in his career, Hill actually had to address the media to let them know which nickname HE preferred. He chose Kenny Trill but shortly after became Kenny Benched. In his first game at the helm for TCU, Hill threw for 439 yards with two touchdowns and two interceptions.

Now look at what you’ve done week 2, you have forced me to write about Iowa! The Hawkeyes come into this rivalry game with a win under their belts against Miami of Ohio (the good Miami). There is no surprise when Iowa comes into any game on offense, they will hand the ball off to workhorses Akrum Wadley and LeShun Daniels Jr. to wear down the defenses. Then when teams move up into the box, C.J. Beathard will try to hurt them through the air. They worked this to perfection in week one as the Hawkeyes scored 45 points which is more than enough for their defense. PASADENA, CA – JANUARY 01: Quarterback C.J. Beathard #16 of the Iowa Hawkeyes looks to pass over Kevin Palma #44 of the Stanford Cardinal in the 102nd Rose Bowl Game on January 1, 2016 at the Rose Bowl in Pasadena, California. (Photo by Harry How/Getty Images)


Iowa State comes into this match-up after losing their first game of the season to Northern Iowa of the FCS variety. On the bright side, the Cyclones only gave up 367 yards of total offense to this FCS team which is pretty spectacular by Big 12 standards.

This is setting up to be a pretty lopsided win despite the rivalry game. ISU struggled to run the ball versus NIU (25 carries for 50 yards) and was forced to throw the ball. Unfortunately for Iowa State, the Hawkeyes have one of the best secondaries around.

In another feat of amazing powers, fueled purely on SEC speed (the cocaine of football), the Tennessee Volunteers were able to hold off the Appalachian State Somethings preventing them from becoming the next Michigan. Let’s take a second and remind everyone how great that moment was:


Tennessee really struggled to get the ground game going despite have Jalen Hurd back there. With quarterback Josh Dobbs really struggling, it allowed the Mountaineers to really focus on stopping the run game. Hurd was only able to manage 110 yards on 28 carries.

Virginia Tech comes into his game after winning the first game of the Justin Fuente era 36-13 against Liberty. Sophomore quarterback Jerod Evans received his first start and threw for 221 yards and four touchdowns.

I’m really not convinced this will be a very good game. I do think the Volunteers are a good team and what SEC team is not going to play their best on a race track? Seriously, watch this game to see how this looks playing at Bristol Motor Speedway because it is only going to happen once. I just don’t see them doing it after this year when 150K+ all realize there are no good seats to see a football game at the race track.

The post What Would Woody Watch: Week 2 appeared first on The Buckeye Battle Cry: Ohio State News and Commentary.