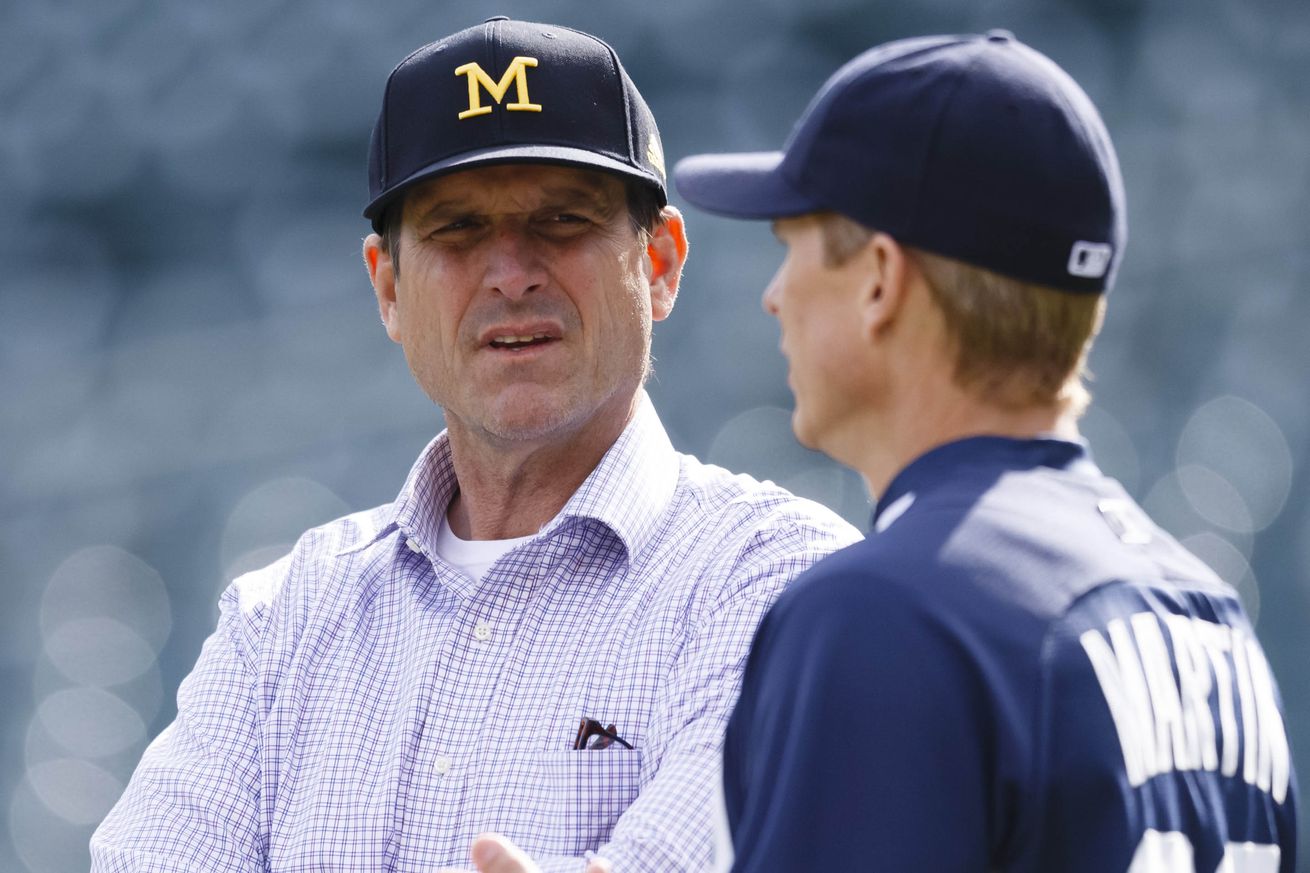 With an outstanding incoming recruiting class, Michigan has the second-best odds behind Alabama for this year's college football crown.

"The Wolverines, though, have seen their odds recently jump. Michigan now has 7 to 1 odds to win it all, with Clemson, Florida State and Ohio State trailing Jim Harbaugh’s program with 8 to 1 odds."


Despite the Alabama Crimson Tide remaining the overall favorite to win the third College Football Playoff this season, the Michigan Wolverines are creeping up as the next-best option. According to updated ratings from the Las Vegas SuperBook, Alabama has 5 to 1 odds of winning their second-straight national title. Ohio State is very much in the hunt, however, sitting at 8 to 1 odds to win it all this season. Even with the loss of a dozen starters from last year’s team, which finished at 12-1 and capped the season with a Fiesta Bowl win over the Notre Dame Fighting Irish, the Buckeyes return quarterback J.T. Barrett, and still have Urban Meyer running the show. The most obvious test for Ohio State early in the season will be their matchup at Oklahoma. A win could lend significant credibility to the young Buckeye squad, but the game is early enough on the calendar that a loss would not knock the Buckeyes out of the playoff hunt altogether.

Nick Saban’s squad returns a number of key contributors from last season, along with a top recruiting class, all of which places the Tide in prime position for a repeat.

While Jim Harbaugh’s team is unproven, with an untested quarterback and key losses on defense, they have a relatively easy non-conference schedule which could help them to gain the necessary experience early in the season to carry them through to the playoff.

Clemson, like Alabama, returns as a favorite in early odds to win the playoff, but will likely face a similar path through the Tide itself to win a title. Fortunately for the Tigers, they also return their starting quarterback and Heisman finalist in Deshaun Watson.

Finally, Florida State will have to face off against Clemson for a shot to even play in the ACC Championship. However, if the Noles are successful, they have a clear road to the playoff and, potentially, a national championship.

"There’s a certain amount of pressure on second-year guys in summer league to take over. They’re the only players with actual NBA star power and experience at the event, so they’re supposed to deliver a level that is higher than the rookies and players on the outside trying to get into the NBA."


After a rookie season filled with questions about his work ethic, maturity and star-power, Los Angeles Lakers point guard D’Angelo Russell is starting to prove his potential in the NBA’s summer league. And for the second-year player out of Ohio State, this is a critical time to do so, given that he must prove himself to be better than everyone else on the court during summer play.

While Russell was able to get into a rhythm late last season on the court, reported issues off the court with his teammates--specifically Nick Young--left many wondering what his role would be come next season, and how his maturity level might affect the team as a whole, especially as new head coach Luke Walton takes the reigns in L.A. Combined with the loss of Kobe Bryant to retirement, the struggling Lakers are seriously in need of star power.

However, the Lakers are now 2-0 this summer, riding on a game-winning three-pointer from Russell against the Philadelphia 76ers Saturday. Russell has averaged 21 points per game along with 7.5 rebounds and 5.5 assists. While it was largely due to Russell’s play, behind a team-high six turnovers, that the Lakers were in a position to need a last-second game winner, Russell managed to turn it around in the fourth quarter, hitting four of his final six shots to close it out.

Despite struggles for the Lakers as a whole, Russell’s game got stronger as the season wore on. He averaged more than 15 points per game after the All-Star Game, compared to a dozen before, and will have an opportunity to continue to improve moving forward under a new regime in L.A.

"He’s one of those punishing backs. He’s a three-down back. He can do it all: Catch it out of the backfield, he can run between the tackles. He has enough speed to break the long ones. He’s definitely a three-tool player that can just play on every single down. And it helps out the defense a lot."


Former Ohio State Buckeyes running back Ezekiel Elliott may actually have an impact on both sides of the ball for the Dallas Cowboys come the start of the 2016 season, as his consistent rushing could provide an aid to a struggling defense. With Dallas Cowboys’ defensive ends Randy Gregory and Demarcus Lawrence suspended for four games to start next season, and linebacker Rolando McClain suspended for 10, the Cowboys will likely be relying on a consistent, punishing rushing attack to give the dissipated defense time to recoup between drives, breaking down opposing defenses and flipping the battle for time of possession in favor of the Cowboys. While the Cowboys are actively seeking replacements for the three suspended players, it is unlikely that the fill-ins will be able to adequately make up for what has been lost on the defensive side of the ball, meaning that Elliott could prove to be a key contributor in keeping the defense off the field as much as possible.

Like in 2014 behind Demarco Murray, the Cowboys will be aiming for prolonged drives centered around a strong running game. According to safety Barry Church, that’s what kept the defense fresh in the fourth quarter, allowing for the defense to get more turnovers and win games. As is the case now, the 2014 Cowboys defense was unproven heading into the season, but was able to pull together behind a solid offense. Though finishing No. 19 in the league in total defense, the Cowboys managed 1,650 total rushing yards, placing them among the top-10 in the NFL.