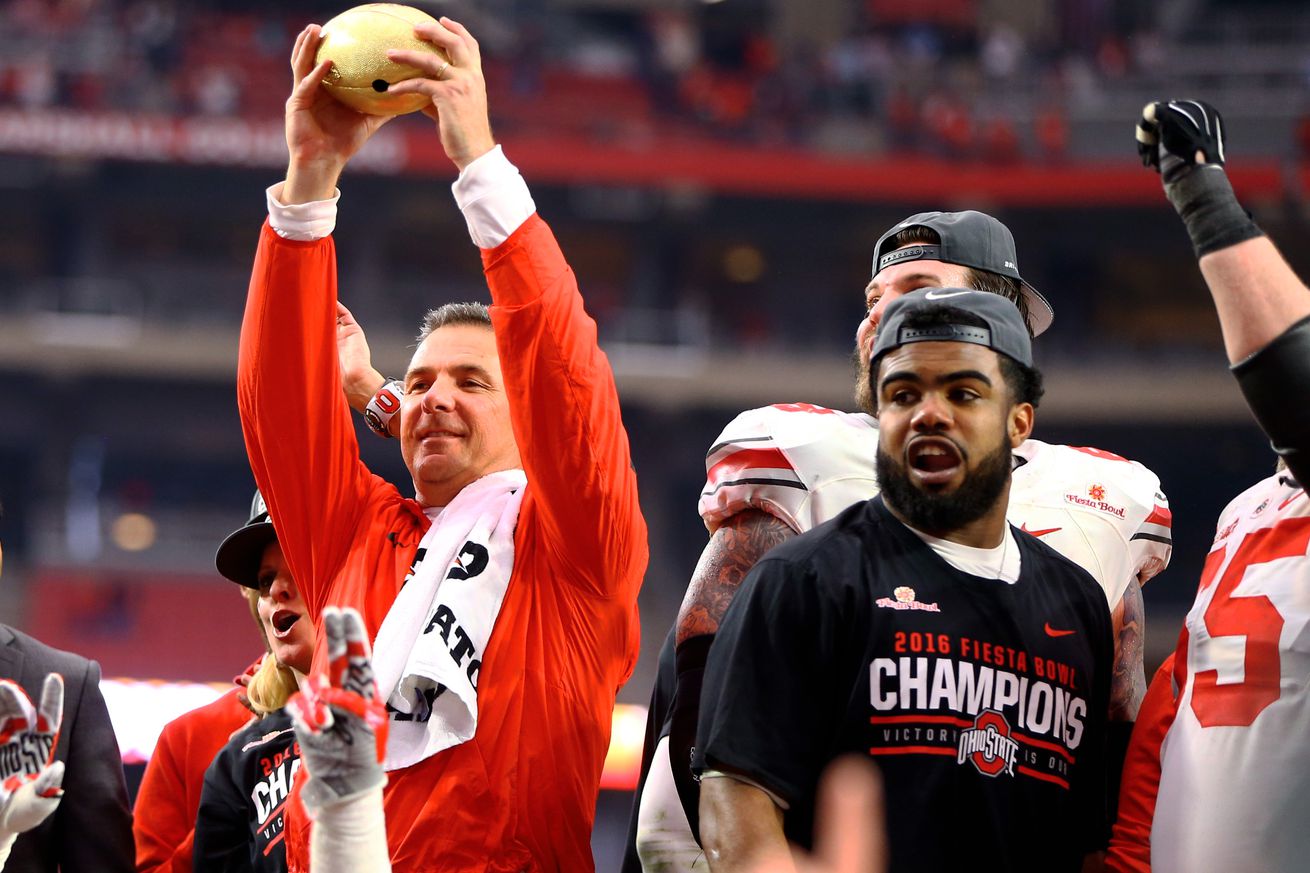 With the addition of Greg Studrawa, the Buckeyes are looking for some increased offensive potency.

"I think he'll be a great fit for our room. We're all excited about it, get a little different perspective on things."


In case you missed it yesterday: we're two weeks removed from the end of Ohio State's season, and Urban Meyer is already tinkering with his offense. With the hire of former LSU offensive coordinator Greg Studrawa, the offensive experimenting continues for Meyer and his staff.

First came the promotion of OL coach Ed Warinner to offensive coordinator follwing the departure of Tom Herman. The offense stagnated, culminating in a disastrous and ugly loss to Michigan State at season's end. Warinner moved up to the press box instead of coaching from the sideline after that, and lo, Ohio State's ability to run tempo and score points improved dramatically. The Buckeyes thrashed Michigan the following week and hung 44 points on Notre Dame in the BattleFrog Fiesta Bowl. Former Rutgers and Tampa Bay Buccaneers head coach Greg Schiano was added to the staff as a defensive co-coordinator soon after.

Now, with the addition of Studrawa, the Buckeyes have two seasoned offensive line coaches on staff. The linemen are particularly excited to work with Warinner and Studrawa in concert, according to the above quote from senior OL and captain Pat Elflein. The expectations for the Buckeyes in 2016 are considerably lower than they were heading into last season, and these additions might be just what the team needs to enter the fall in high gear.

What's that old chestnut about hard work paying off? Two Buckeye football players, Joe Burger and Craig Fada, just saw their effort pay dividends in the form of football scholarships. Burger and Fada, both linebackers, are still buried on the depth chart, but with Darron Lee and Joshua Perry off to the NFL, they might get more of a chance to compete for the odd snap.

Per Ohio State SID Jerry Emig, Burger and Fada are both set to graduate in December 2016. They've appeared in 34 and 39 games, respectively, helping anchor a predictably-excellent special teams unit. It's always nice to see the guys putting in work behind the scenes have their efforts recognized, and it's been a banner day for these two linebackers hailing from Cincinnati and Columbus.


This morning, Cleveland.com's Doug Lesmerises gave an interesting insight into the world of sports finance in the state of Ohio. If, Lesmerises notes, Ohio State is really worth $946.6 million, as the Wall Street Journal reported this week, that means they're a more valuable property than every pro team in the Buckeye State, save for the Bengals and Browns. More valuable than the Cleveland Indians. Than the Cavaliers. Waaaaay more valuable than the Blue Jackets, bless their hearts.

Still...is this a fair reckoning? Lesemerises correctly points out that valuation of a college football program is an inherently risky exercise, as doing so requires one to take back money from the non-revenue sports that the football program supports. Besides, the Buckeyes have the combined advantages of booster donations, untold thousands of alumni, and basically having no comparable competition within the state for eyeballs, dollars, or loyalty. There's also that pesky unpaid workforce to consider.

Granted, it's not like I understand how money works -- if I did, I probably wouldn't be blogging -- but consider, for a moment, the WSJ's estimate of Ohio State football's worth combined with the ridiculously lucrative Nike contract that the school signed this week ($252 million, for those keeping score at home).

It's almost as though there's enough money to pay the players in there somewhere.