tBBC TTUN Beware: It’s All in the Eyes

TTUN Beware: It’s All in the Eyes
jcollingsworth via our good friends at Buckeye Battle Cry
Visit their fantastic blog and read the full article (and so much more) here 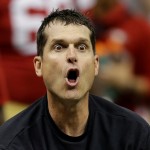 I have no idea why I even care … or is it more of grinding glass dust into the whiny eyes of the opposition? But, frankly, the opposition is Northwestern, Penn State, Indiana, and Illinois, so on and on. What I speak of here is the enemy – TTUN…the rodents of the road-kill state … the flushes of the cesspool of the world. They are about to swing full-fledge into crazy-ville as the weening period has subsided and their buying into the false prophecy of Jimbo has damned them for an eternity.

The desperateness of TTUN to return to greatness led them to the worshipping of the golden calf. And that golden calf was a return to 1983-86 Ann Arbor with hopes pinned on a quarterback with a knack more geared toward chaos than glory (As his greatest moment would be the 1985 Fiesta Bowl win against Nebraska. He’d score two running TD’s from one and two yards out in a 27-23 victory)…

Now as a College Coach he has amassed a 39-24 record which includes a 10-3 first year with the Wolverines. Prior to his return to Ann Arbor he was “supposedly” the next great thing since Vince Lombardi in San Francisco where the 49ers in four years went 44-19-1. With 2 first place sittings only to lose to the Giants in the NFC Championship game in 2011. In 2012 he lost to his brother and the Ravens in Super Bowl XLVII. Even so – it seemed as the 49ers couldn’t give him a plane ticket out of town fast enough: The 49ers Jed York stood in a news conference and stated without any suggestions of reservation: “Ultimately we came to the conclusion that it was best for us to go in different directions.”

So the great minds in Ann Arbor opened up the pocketbook and brought Jimbo “home”.

In two years’ time Jimbo has sparked feuds with Nick Saban, Jimbo Fisher, Gus Malzahn and even Ezekiel Elliott. Even the tiny tiff with ‘Zeke on twitter is completely meaningless to me – though #15 was right… (Basically saying: Before any smack – gotta win a rivalry game Jimbo!). It is merely all a clear indication of an out-of-control raging lunatic that has found a new source to rant – Twitter (a promise for a not so gentle tumble – just ask a certain Presidential Candidate). It is precisely this type of behavior that TTUN should be concerned with…

…But they won’t be. The worshipping of the golden calf has commenced.

A body language expert and consultant – Dr. G. Jack Brown has recently said – and I shall quote: “It’s no secret that some of Harbaugh’s previous players have complained about his temper – while others have come to his defense. From a strictly nonverbal perspective, Harbaugh displays several warning signals of poor impulse control – one of which is his wide-open eyes. Is “poor impulse control” in the job description of a Division-I college football coach? Right up there with “using emotion in the interest of motivating student athletes to be better human beings” I’m guessing. But what I see is rage and behavioral problems that will destroy and irrevocably ruin the football program he endears.”

Undoubtedly he will bring a flash of success to Ann Arbor just as he did to Stanford and the 49ers. But what he will not bring is that success on a long lived scale such as what Bo Schembechler had done for TTUN. When you have a coach that is out on the recruiting road – representing THE SCHOOL – and he dons sweatpants and a tee-shirt, sleeping over at a recruit’s home – while on another occasion climbs a tree to impress yet another recruit – then the obvious need to resurface the “Glory” days may have a “flash” of promise – but the sustainability of disorder will only set in. 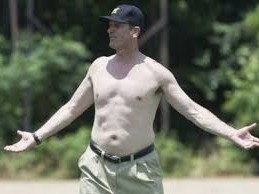 Jim Harbaugh has worn out his welcome everywhere he visited. Ask every team where he was employed.

As Dr. Brown finished in his summation of Jimbo: “It could be tomorrow, it may be next month or five years from now, most likely this will occur in preparation for a big game or in the midst of Michigan having a particularly bad losing season. He will go nuclear … and no one will understand … though they should. The signs are there. The eyes tell it all.”

Then I see TTUN no longer playing that silly little complacent card by telling Jimbo as if he is their Dentist: “We are a scholarly bunch here. So when you put your fingers in our mouths, we don’t worry about fingers being in our mouths, instead we think, how can we better help you get more fingers into our mouths? Can we open wider? Swallow our tongue? Help us help you.” Because Jimbo will only shove his entire fist down their throats. It’s what he has done everywhere he has visited. And just like each short stay folks were tired of his act. It was no longer militaristic – somewhat falsely proposing heroism that would grant success. The final result was always ruinous.


…And I promise you – I cannot think of a better place for all of this to transpire than in Ann Arbor.

Listen up you scholarly bunch … It’s all in the eyes. Enjoy Jimbo’s stay!

The post TTUN Beware: It’s All in the Eyes appeared first on The Buckeye Battle Cry: Ohio State News and Commentary.