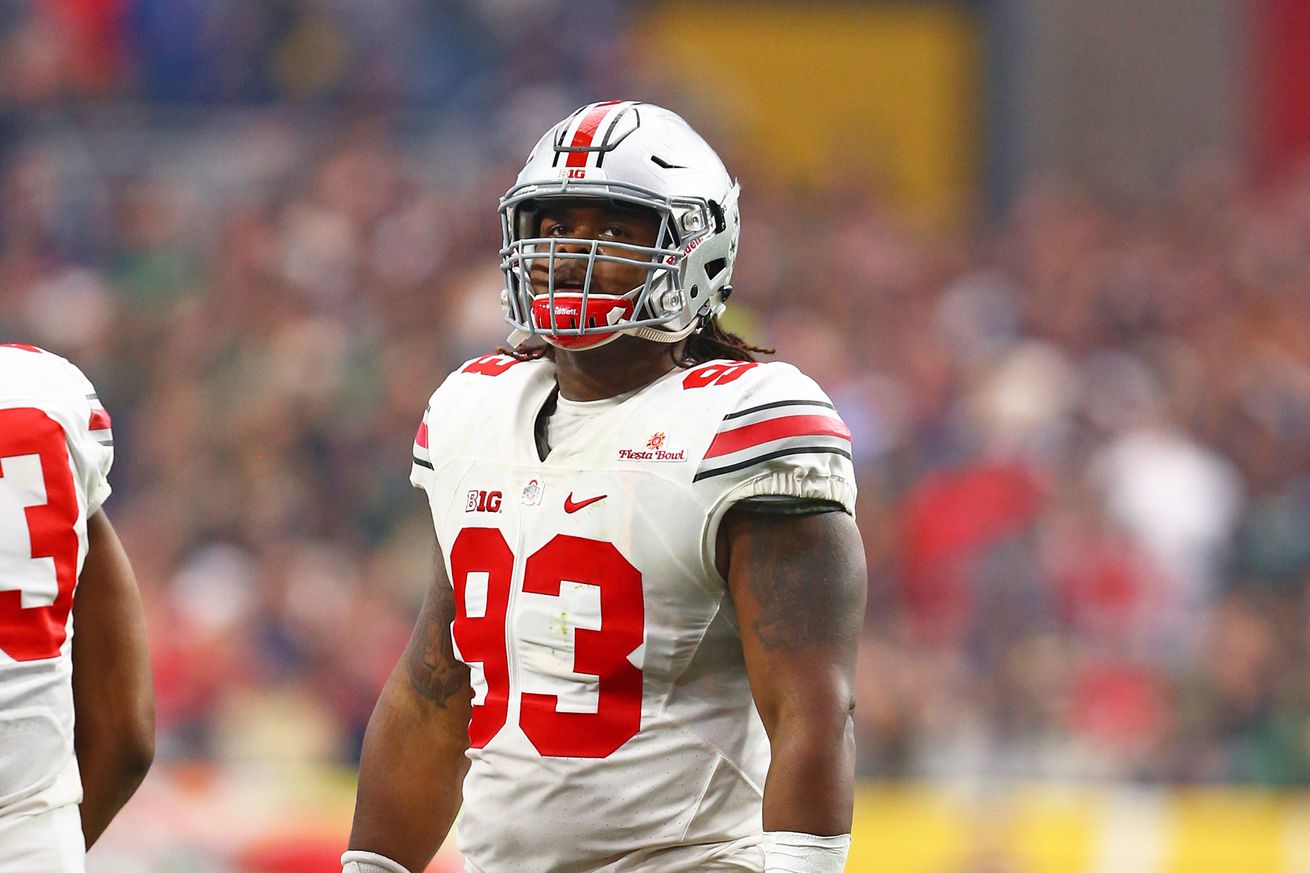 The Buckeyes have some holes on the defensive line.


With three of last year’s starters on defensive line gone, it is up to the myriad of former backups to step up and earn their starting roles in spring practice. Especially given the loss of both defensive tackles in Adolphus Washington and Tommy Schutt, players like Tracy Sprinkle and others have moved from their native defensive end positions to fill the vacant spots inside. Along with Sprinkle, Dre’Mont Jones and Jashon Cornell were recruited to Ohio State as smaller and lighter defensive ends, but have grown in size enough to fill the tackle position, with the added bonus of bringing enhanced quickness to the line. Defensive line coach Larry Johnson has commended the work ethic of the group, especially Sprinkle, in moving to and learning a new position.

Despite these key losses, there is still a relative wealth of experience on the young line. Tyquan Lewis, the lone remaining starter on the line, returns to defensive end opposite, most likely, Sam Hubbard, who saw significant playing time last season filling in for Joey Bosa. With Bosa’s departure for the 2016 NFL Draft, Hubbard is natural fit to fill the void. Sprinkle, who also saw time as a backup during the regular season, saw meaningful playing time in the Fiesta Bowl with Washington’s suspension and Schutt’s foot injury. Junior Donovan Munger also stepped up to fill the void, along with fellow junior Michael Hill. With Munger out due to a medical issue, Hill is the early favorite to play opposite Sprinkle at tackle.

"My press man cover skills. That’s something in the NFL that’s really important, to be a physical guy at the line of scrimmage and be able to take receivers off their path. And that’s something I do better than anybody."


As one of the top corners in the draft, former Ohio State Buckeye Eli Apple is projected by some analysts as one of the Miami Dolphins’ top picks in April’s draft, along with running back Ezekiel Elliott. Despite the fact that the Dolphins have other significant needs on both sides of the ball, it might be tough to pass up any of the corners remaining on the board when the Dolphins’ No. 13-overall pick rolls around.

In spite of his current status, however, Apple was not always seen as a top performer on the field or in practice by his teammates, especially following the departure of Bradley Roby in the first round of the 2014 NFL Draft, when it would have seemed that Apple would simply have to step in to fill the vacant corner spot. Apple’s redshirt freshman offseason was marked with a distinct lack of energy and perceived effort, but it would turn out that the lack of energy was a direct result of an underlying iron deficiency. Once diagnosed and treated, Apple turned things around to the point where former defensive coordinator Chris Ash commented on his outstanding work ethic in practice. Apple went on to become a two-year starter, earning a national championship in 2014 and all-Big Ten honors in 2015, along with being named the defensive MVP of the Fiesta Bowl against Notre Dame. .

In regards to the Dolphins, the 6-foot-1 Apple would bring size to a secondary where it is sorely missed, along with the coverage skills and aggression expected of an NFL-level corner. While he will need to continue to work on controlling his hands in avoiding penalties, Apple brings confidence with his press coverage skills that could be a huge benefit to the Dolphins.

Will Smith was voted into the #Saints Hall of Fame last month, was to be made public in May https://t.co/6sbWLujKgz pic.twitter.com/2HgMRLfF4o

— New Orleans Saints (@Saints) April 10, 2016​
Former New Orleans Saints defensive end Will Smith had been selected to the Saints Hall of Fame last month, with an expected official announcement scheduled for May 17. Smith was chosen by a unanimous election from the media selection committee for his outstanding contribution to the Saints during his time with the team.

Media outlets reported the election Sunday after Smith was shot and killed Saturday night in New Orleans. Smith played nine seasons for the Saints, and was a key contributor to both the 2006 NFC Championship team as well as the 2009 Super Bowl team.

Smith’s death has sparked shock and outrage throughout both the NFL and broader sports world as athletes ranging from LeBron James to Drew Brees have expressed their condolences to the Smith family.

Initially selected by the Saints with the 18th overall pick in the first round of the 2004 NFL Draft, Smith went on to become a Pro-Bowler and team captain during his tenure, which was spent entirely in New Orleans. At Ohio State, Smith was a three-year starter at the defensive end position, including during the 2002 National Championship season, as well as a captain and first-team all-American.

"I watched the 2012 Olympics and I was like ‘Shoot. If I want to make the Olympics I have to be that guy.’ When you’ve got somebody like that in your class you have to train as hard as you possibly can."


Kyle Snyder, the reigning NCAA champion heavyweight wrestler, just added another item to his long list of accomplishments in being selected to the U.S. Olympic team to compete in Rio de Janeiro in August. Snyder defeated Jake Varner, the 2012 London Olympics gold medalist, in the 97-kilogram weight class in the Olympic Team Trials held in Iowa City over the weekend. Though Varner won the first match after scoring two takedowns with a score of 4-4, Snyder came back in the end with 4-0 and 6-1 scores to win the contest. This match was the fourth time Snyder has defeated Varner in his short career.

Snyder began his prolific run after becoming the youngest American wrestler to win a World Championship at age 19. He had initially opted to redshirt his sophomore season at Ohio State in order to better prepare for the Olympic trials, but returned to compete in 11 matches this spring, moving up to the heavyweight class in the process. Snyder is the first Buckeye to make the Olympic team while still actively wrestling for Ohio State.

Fellow Buckeye Nathan Tomasello and former Buckeye, and four-time NCAA champion, Logan Stieber also competed in the trials, but both were eliminated from competition before the finals.