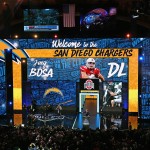 For college football fans that love their Ohio State Buckeyes, the NFL season got more intriguing this weekend.

So far, two other former Ohio State players have signed as undrafted free agents as well. Combine that with the already strong contingency of Buckeyes in the NFL, and the 2016 season becomes intriguing for all of Buckeye Nation.

Here is a top look at Buckeye vs. Buckeye match ups during the upcoming NFL season.


Thursday, September 8 — Carolina Panthers at Denver Broncos (8:30 PM ET NBC): Not only do fans get to relive the Super Bowl, they also get another strong taste of Ohio State football. Last time around, the OSU story line was Bradley Roby vs. Ted Ginn Jr. and Philly Brown. This time, you can add Kurt Coleman vs. Jeff Heuerman and DeVier Posey to the mix.

Sunday, September 11th — New York Giants at Dallas Cowboys (4:25 PM ET FOX): The two rookies pitted up against each other. Ezekiel Elliott faces off with his former teammate Eli Apple during the first week of the season. I can picture it now. The NFL world is introduced to the greatest Ohio State draft class with Zeke and Rod Smith exploding for 200+ yards on the ground and Eli picking off a Tony Romo pass to win the game. The off-kilter throw being caused by big Johnathan Hankins.


Thursday, September 15 — New York Jets at Buffalo Bills (8:25 PM ET CBS): It’s still hard for me to picture Adolphus Washington trying to smash through Nick Mangold. Also in the mix potentially is Cardale Jones at quarterback for the Bills. Jalin Marshall has a good shot at making the Jets roster and Devin Smith will try to go over the top of Rex Ryan’s defense.

Sunday, September 25 — San Diego Chargers at Indianapolis Colts (4:25 PM ET CBS): Joey Bosa against Jack Mewhort could be fun at times, especially if the Chargers coaching staff plan to twist their top pick inside at times for better matchups.

Sunday October 2 — New Orleans Saints at San Diego Chargers (4:25 PM ET Fox): I’d love to see Josh Perry have a huge game against the Saints run game, that is doing everything it can to improve. Something about Joey Bosa pass rushing Drew Brees gives me goosebumps. Especially if he can evade the pressure and get the ball to Michael Thomas.


Sunday October 9 — New York Jets at Pittsburgh Steelers (1:00 PM ET CBS): Are you kidding me? Two of the best Ohio State linebackers in school history competing against each other’s opposing offenses? Ryan Shazier and Darron Lee will be fun to watch. The comparison between the two has been thrown out there tons of times during the draft process. Let’s see if the comparison sticks.


Thursday October 13 — Denver Broncos at San Diego Chargers (8:25 PM ET CBS): The story line in pregame for this one will be focused on the emergence of Joey Bosa and Brad Roby. It will also possibly feature Joshua Perry trying to stop former Buckeye TE Jeff Heuerman.


Sunday, October 30 — Detroit Lions at Houston Texans (1:00 PM ET Fox): This will be a great development game to see where the likes of Braxton Miller and Taylor Decker stand.

Sunday, October 30 — Seattle Seahawks at New Orleans Saints: There are so many good nuggets here. Can Vonn Bell keep Jimmy Graham in check against his former team? Will Michael Thomas studder-step the Legion of Boom into a group face plant?


Sunday November 6 — Dallas Cowboys at Cleveland Browns (1 PM ET Fox): EZE returns to Ohio to take on the team that probably would have passed on him if he fell to number 8 in the draft. Poor Cleveland fans….

Sunday November 6 — Colts at Packers (4:25 PM ET CBS): If you are a nerd that loves the trenches, this one is for you. Corey Linsley and Jack Mewhort will battle to protect their respected quarterbacks in the game being called, “Luck vs. Rodgers II”.

Monday, November 7 — Bills at Seahawks (8:30 PM ET ESPN): I hope Cardale Jones is starting at this point and that he gets the opportunity to carve the Hawks. Can you tell I’m not a big fan of Pete Carroll?

Sunday, November 13 — Cowboys at Steelers (8:30 PM ET NBC): Does it get better than a longtime rivalry between two even teams in primetime? It sure does. Especially when the key match up will be Ryan Shazier vs. Ezekiel Elliott.


Sunday, December 11 — Steelers at Bills (1:00 PM ET CBS): Mike Adams will try and stop Adolphus Washington in the trenches. This could be a war of epic proportion.

Sunday, December 11 — Chargers at Panthers (1:00 PM ET FOX): This game will have a total of six former Buckeyes on the field.


Sunday, December 18 — Steelers at Bengals (8:30 PM ET NBC): Is it a stretch to use a kicker match up in this game? Mike Nugent might play a role people! (After last year’s playoff game, I want to see this again).


Monday December 26 — Detroit Lions at Dallas Cowboys (8:30 PM ET ESPN): A late Christmas present for fans will be Ezekiel Elliott running all over my favorite team’s defense. Hopefully Taylor Decker can get the lanes open for the rushing attack of the Lions to balance things out..