The Dallas Cowboys could end up drafting Ezekiel Elliott 4th overall
Harry Lyles Jr. via our friends at Land-Grant Holy Land
Visit their fantastic blog and read the full article (and so much more) here 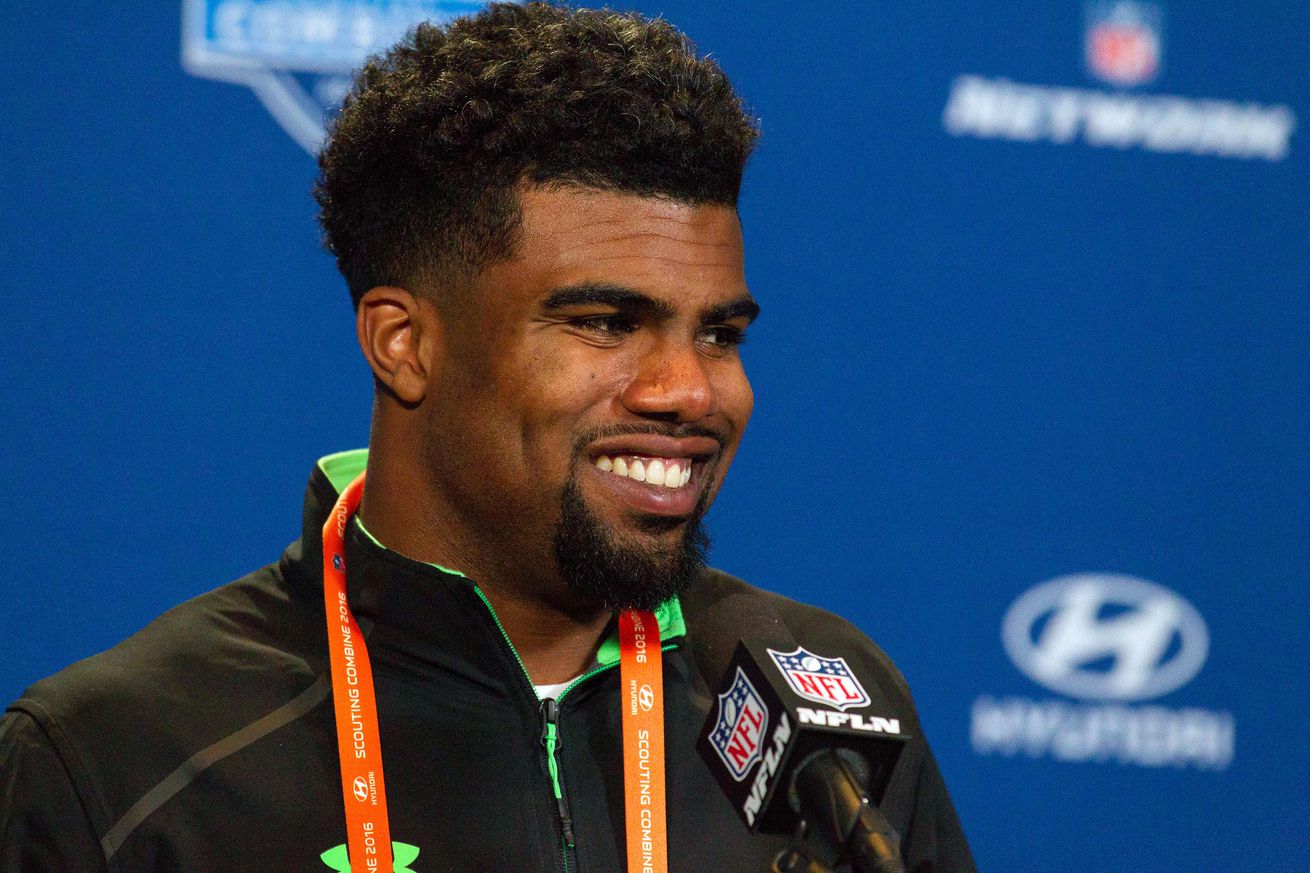 The versatile Buckeye back could be the best option for the Cowboys with the fourth overall pick.

"Don't be mad if the Cowboys decide that drafting Ohio State running back Ezekiel Elliott in the first round gives them the best chance to win right now."


You typically haven't heard his name this high up in the upcoming NFL Draft, but Jean-Jacques Taylor says that if the Dallas Cowboys are serious about becoming the contenders that they were just two seasons ago, Ezekiel Elliott would be the correct pick in moving back into that direction. Quite frankly, he's not crazy for this thought. Tony Romo has been injury prone, especially last season where he essentially missed the entire season due to injury. In the 2014 season, he was better when he had to throw the ball less, and was able to rely on DeMarco Murray.

Zeke would be a perfect replacement for Murray in multiple ways. The Cowboys offensive line is known for being one of the best in the league, and often received much of the credit for the success of DeMarco Murray, but the Cowboys backfield wasn't the same last season with Darren McFadden and Joseph Randle. Picking Elliott fourth overall in the draft would be considered a reach by many, but he provides more than just his running game. He's an excellent blocking back, and that would be a huge bonus in trying to keep Romo on his feet and healthy. He's also a great pass catching back. Simply put, he's a complete back. If there's a man willing to make a pick that goes against what many feel might be right, it's Jerry Jones.

"That's the biggest change in this latest round of mock drafts: Braxton Miller is falling out of the first round."


With the NFL Combine over, we're now seeing the effects of the results from the combine taken into account in mock drafts. As Cleveland.com's Bill Landis points out, Braxton Miller is slipping in mock drafts after his combine performance didn't impress as many thought that it would. This isn't necessarily surprising when you consider Braxton switched to a completely different position after three years of playing quarterback in college. Landis points out that Miller was typically projected in the first round of many drafts, but even that might have been a reach, good combine performance or not.

Braxton Miller probably won't be a first round pick, and that's fine. If he is able to crack the first three rounds, I think it's safe to say that would be a win for him. He certainly would get consideration with a good senior season at quarterback in the first round, and for him to still be a highly regarded prospect at a different position says a lot about his athleticism and his ability to play the game.

"Meyer faces some big challenges next season. Yes, he will have some building blocks for his fifth squad, but questions loom."


The 2016 Ohio State football squad is going to be a much different look than 2014 and 2015. That's not to say that it won't be a good season. But the Buckeyes come in with many more questions than they faced in the two years prior. One thing they won't have to worry about is a quarterback battle, with J.T. Barrett the clear-cut starter with Cardale Jones taking his talents to the NFL. The Buckeyes have questions at running back, wide receiver, and on defense. The offensive line will be reshuffled, but worries of it not performing up to last season's standards aren't necessarily there, as it appeared they had trouble in many games.

The Buckeyes have Mike Weber and Bri'onte Dunn in the backfield to replace Ezekiel Elliott, with Weber impressing the coaches, even before he sustained his torn meniscus. The Buckeyes have a plethora of talent at receiver, a lot of it we haven't been able to see in action, much due to injury or simply inexperience. We could see the likes of Torrance Gibson, K.J. Hill, Dontre Wilson, Johnnie Dixon, Noah Brown, and Corey Smith among others. The secondary will have a different look, along with the defensive line. Expect guys like Damon Webb, Marshon Lattimore, Sam Hubbard and Jayln Holmes to see more time. With a mix of new faces and some returning, the Buckeyes will still be a contender, we just won't know their ceiling until the games begin.

Cardale didn't get a chance to show off his stuff at the NFL Combine this past week after pulling his hamstring while running the 40-yard dash. "Another mystery - perhaps the biggest mystery in college football history. Who is he? He comes out of nowhere, takes the cape off and the Buckeyes win the national title, and I haven't seen him since," Gruden said in a statement via ESPN. "He's inexperienced and there's not a lot of film to look at. He'll be one of the most intriguing shows we've ever done." The show is set to begin on April 12 at 8:30 p.m. on ESPN and its affiliated networks.