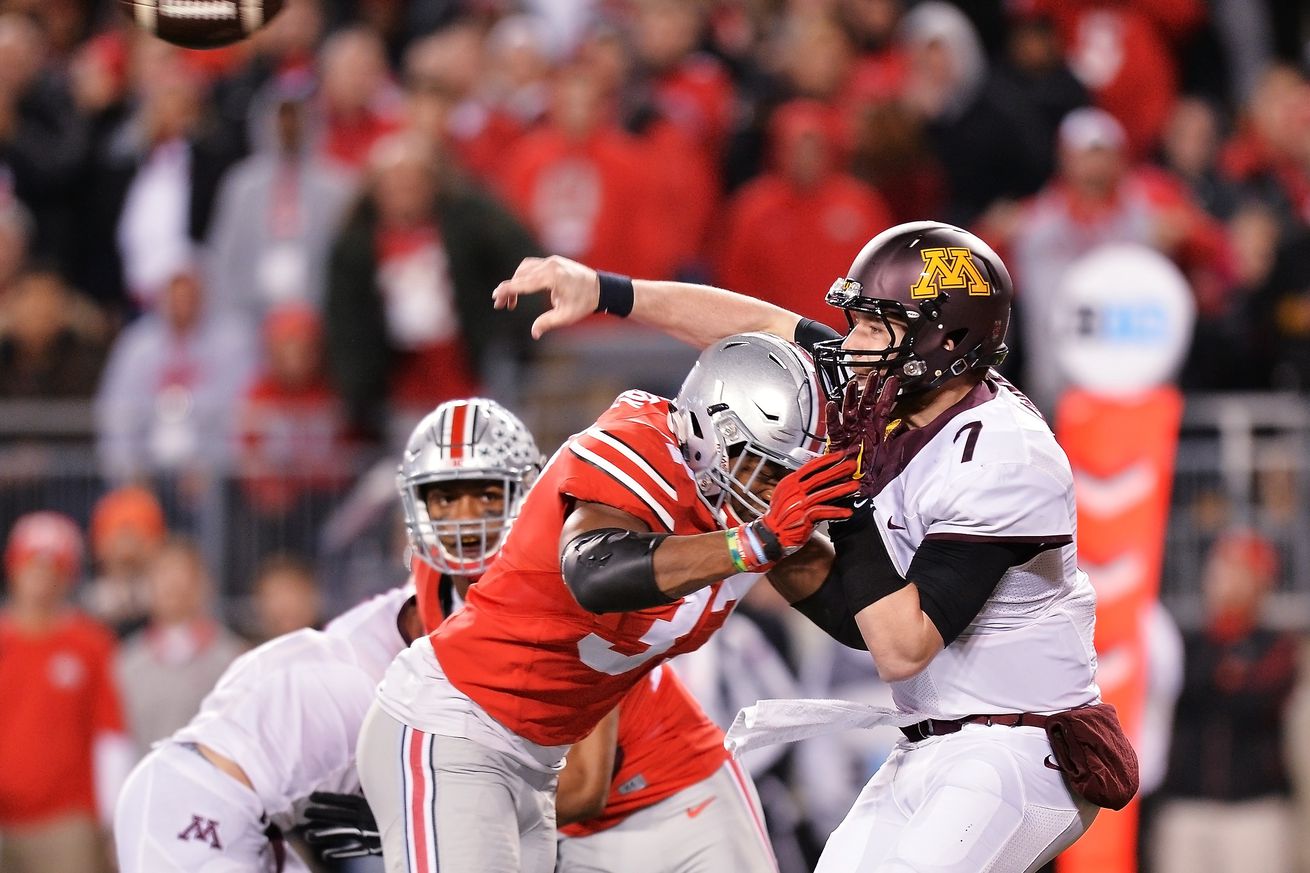 There's nothing quite like watching our favorite Buckeyes pound the opponent into the turn against their will, but which hits stood out above the rest?

As a former defensive player, I always found it difficult to explain to people exactly why laying a big hit is so relished on the football field. Luckily for me, Kam Chancellor exists. For those who don't know the Seattle Seahawks 6'3" 230 lb strong safety, Chancellor has quite the history of laying out anyone who dares cross his side of the field.

Anyways, back when this thing called Grantland.com existed, a particular quote from Chancellor made a very large impression on me because it is the best explanation I have ever read regarding why defenders crave the big hit so much.

"Just the ferociousness...The velocity, the power, the contact. I just like ... it's hard to explain. I just like that feeling of being aggressive, in control, instilling your will."

For a sport like football that is literally built on violence, the big hit is akin to a turnover in that it can swing the tide of a game in mere seconds. Plus, what's more fun than watching your favorite defender stand tall over the fallen enemy and just look like a straight up bad-ass?

Even in the age of football where player safety has never been stressed more, the Silver Bullets (and Zeke, of course) managed to instill their will on plenty of occasions over the course of their 12-1 campaign. What follows are my personal favorite big hits from this past season, not ranked in any particular order because as long as the play consists of a Buckeye laying out the opposition, who really cares.


You wanted it, you got it Michael Brewer. Brewer may have beat the Buckeyes once, but in the third quarter of Ohio State's opening game at Virginia Tech, Adolphus Washington put matters into his own hands to ensure Brewer would have no further impact on the game.

Brewer took a hard hit in the first half that briefly sidelined him, and shortly after ESPN aired a clip of Brewer explaining how he would need to get hit a lot harder to leave that game, Washington obliged and hit Brewer a "helluva lot more".

It's Kato Mitchell's world, we're all just living in it


Up 49-0 against Rutgers, Ohio State had some of their lesser known players in the game. By lesser known, I mean 5'11" 183 lb walk-on wide receiver turned monster Kato Mitchell made his way onto his battlefield.


Mitchell nearly takes this poor linebacker's head off, and it's safe to say there were no "crack" calls to be heard on the football field during this play. What. A. Hit.

Touchdown! And OH MY GOD


Joshua Perry had a great final season as a Buckeye, but it was still odd that a linebacker who will find a home in the NFL after this April's draft could still be somewhat overshadowed. But when you play with Darron Lee and a dude named "Raekwon", it can be hard to stand out. Not on this play in the second quarter against Minnesota.

Sure, Vonn Bell's ridiculously athletic pick six is worthy of some admiration in its own right, but just look at that hit from Perry. The best part about the play was that Perry was initially called for targeting, so Ohio State fans got to watch the hit another 10 times before the officials correctly reversed the ruling. Thanks for a great career Josh, and this hit.


In the buildup to this years Ohio State TTUN game, Wolverines defensive back Jabril Peppers managed to find time to write a lovely 2,300 word essay for The Player's Tribune. Unfortunately for Peppers, maybe he should have spent a little less time reminiscing (or playing offense) and a little more time studying the runaway train that is Ohio State running back Ezekiel Elliott.


As this vine from LGHL's own Christopher Jason shows, Peppers wasn't the only Elliott victim on this day, but he might be the sorest after taking this nasty fall following yet another premiere block from Zeke.

Hey Jake...What are you wearing?


It's not confirmed if Bosa told the overused State Farm joke to Wolverines quarterback (and former high school teammate) Jake Ruddock or not, but it's safe to say after this hit that the answer would be easy: a sling.

Bosa would manage to make an even stronger last impression on the Wolverines thanks to his interception off of Wolverine backup quarterback Wilton Speight, but watching Bosa lose his mind following this vicious hit on Ruddock will always serve as one of my fondest of many Bosa memories.

Any other big hits that stuck out to you? Let's hear them in the comments. Just be careful: you never know when Zeke might come out of nowhere for another vicious cut block.