LGHL The 10 most important Ohio State Buckeyes heading into 2016, Pt. 1

The 10 most important Ohio State Buckeyes heading into 2016, Pt. 1
Christopher Jason via our friends at Land-Grant Holy Land
Visit their fantastic blog and read the full article (and so much more) here 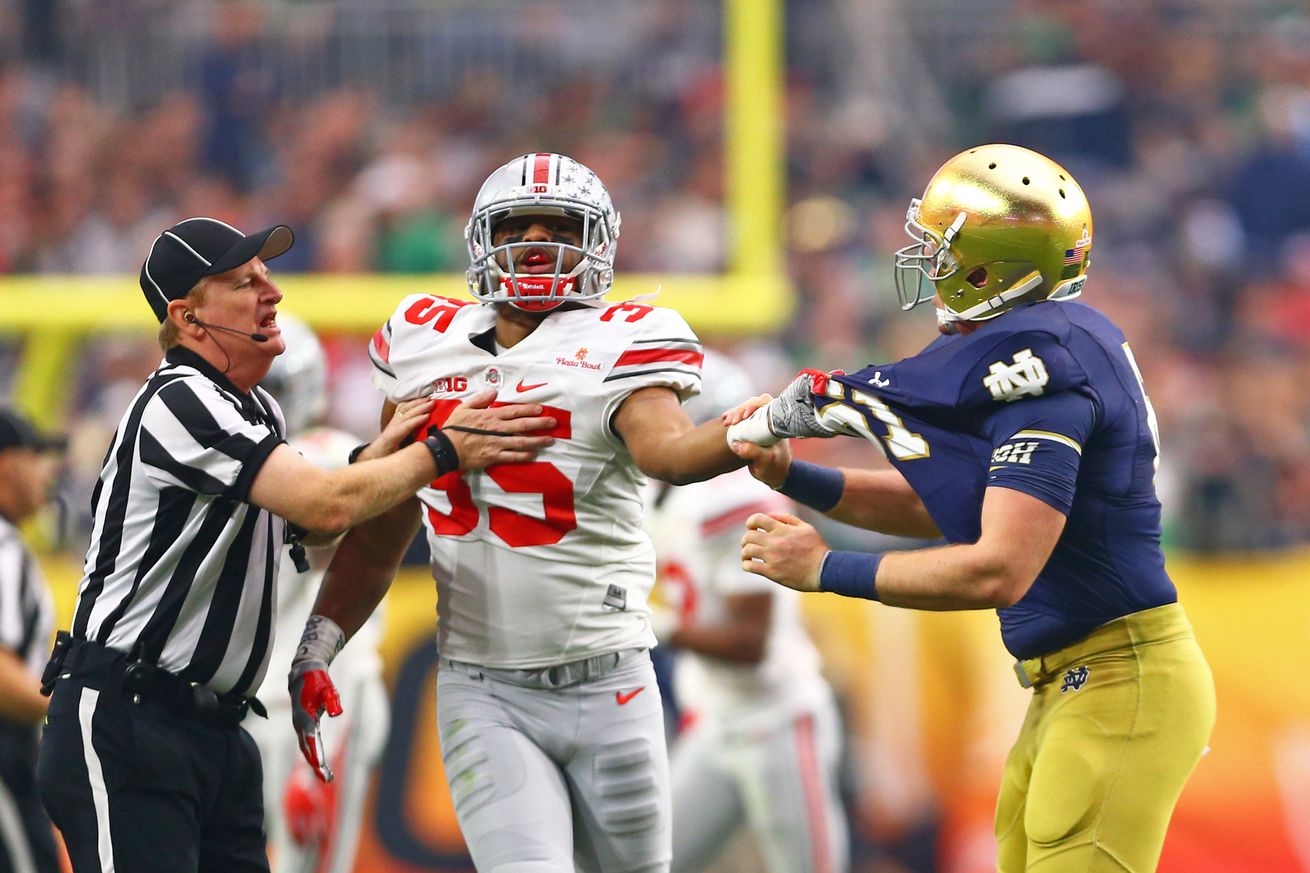 Taking a look at the most important Buckeyes, beginning with numbers 10 through seven.

When looking at the 2016 depth chart compared to the 2015 depth chart, there are noticeable holes and questions regarding inexperience, due to the mass exodus of NFL departures and graduation. Using key departures, spotlighting players at important positions, leadership qualities and players switching positions, we came up with the 10 most important players on the team. They may not be the most heralded players, or even the best players, but they will be vital to this team’s on-field success.

This is the first of three installments, be sure to check back.


Why? In 2015, Ohio State scored 58 offensive touchdowns. Entering the 2016 season, Ohio State returns J.T. Barrett and Curtis Samuel, who scored only 14 of those 58 offensive touchdowns. So why is the kicker vital for this team’s success? Because even though they have a boatload of talent rising up the offensive depth chart, they won’t score as many touchdowns as they did in 2014 or 2015. They will have to settle for more field goals than the 15 they attempted last season, and they’re going to need to make more of them.

2015 performance: Sean Nuernberger didn’t have a great 2015. He lost out on kickoff, extra point and field goal duties to Jack Willoughby, a graduate transfer from Duke, after being the favorite heading into the season. When he did get a chance to see the field later in the season, Nuernberger connected on 17-of-17 extra points and 3-of-4 field goals.

Question marks: With kickers in general, one would have to always be concerned with their mental state. As a freshman on the National Championship team, the highly touted kicker was 13-for-20 kicking field goals and 89-of-89 on extra points, before losing his job to Willoughby in the preseason. Will Nuernberger have his confidence restored for 2016, or was his confidence shattered from losing his job?

Conclusion: The Kentucky native is a career 67-percent field goal kicker and has yet to miss an extra point. He won’t be looking over his shoulder this season and he should bounce-back from his tough 2015 campaign. The highly touted kicker will be counted on to be consistent and put points on the board for this young offense.


Why? Last year we ranked Eli Apple on this list. Apple started the 2014 season as a field corner across from Doran Grant, and although he impressed, no one had him pinned as a future NFL first rounder. If you go back through the list of boundary corners that Meyer has had at Ohio State, you’ll find two first round selections and a fourth rounder. Make no mistake about it, Conley will also be a future NFL draft pick. The boundary position is tougher and much more physical than the field position that Conley played last season. Ohio State typically rolls coverage to the field side, which will give more help to the corner playing across from Conley, and Conley will have to be more of a force player against the run game when the ball is ran into the boundary. It’s a key position in that defense and big names have started there in the past few seasons.

2015 performance: According to the guys at CFB Filmroom, Conley was the most targeted player on the team last year, with 58 targets (Apple was second with 54). Out of those 58 targets, he allowed only 21 completions, which was one less than Apple on four more targets. Conley was tied for the third most passes defended (five), picked off two passes and allowed 12 first downs through the air. As a tackler, Conley finished with 42 on the year, with only five missed tackles (Apple had 11 missed tackles).

Question marks: It seems that every season there is a new leader of the secondary, and it is now Conley’s turn. He has only started 13 games in his career, so although he will be the most experienced player in the young Buckeye secondary, he still does not have a great amount of experience as a starting cornerback. Also, he was helped greatly by two ballhawking, veteran safeties in Tyvis Powell and Vonn Bell, and will not get that same amount of help by the two first year safeties in 2016.

Conclusion: The 6’0”, 195 lb corner has the size and possesses the physicality to flip over and play the boundary position in Greg Schiano’s defense. After a tough outing in 2014 when he replaced an injured Eli Apple for a series against Michigan State, fans were questioning his ability as a future starting corner. He responded by putting together a solid first season and he earned the opportunity to play on the tougher side of the field. If Conley puts up a solid season, he should be a household name by the end of the season and could make an Apple-like jump to the NFL.


Why? Darron Lee came in as our No. 2 most important player last season, as he was observed to be the defense’s biggest playmaker prior to the season. Lee manned the SAM linebacker position, which is where the Swiss-Army knife is positioned on the Ohio State defense. The SAM linebacker spot needs to be athletic enough to cover tight ends, running backs and receivers, strong enough to be stout against the run and possess the ability to play in space against spread offenses. Remember Lee’s impact versus Oregon? Worley is replacing the biggest athletic freak on the 2015 Ohio State defense and will be asked to do a ton in his first year as a starter.

2015 performance: Worley played in 12-of-13 games for the Buckeyes in 2015. He registered 17 total tackles, 1 sack and 1.5 tackles for loss. He played mostly special teams and mop up duty, and didn’t see much time on the starting defense.

Question marks: People forget that Chris Worley actually started over Darron Lee as a freshman in the first game of the 2014 season versus Navy. He finished that game with 52 snaps on the starting defense and registered five tackles. Unfortunately for Worley, he has yet to start another game since that day, as Lee took the job and ran with it all the way to the first round of the NFL Draft. Worley is a physical clone of Darron Lee and will need to put it all together like his predecessor to have an impactful and playmaking 2016.

Conclusion: Worley has the size (6’2”, 228 lbs) and athleticism to succeed at the SAM linebacker position. He was neck-and-neck with Lee before Lee broke out as a player and later became a first rounder.


Why? We put Marcus Baugh on this list last season, but for a completely different reason. Last season, Baugh was the backup tight end behind Nick Vannett, where he was featured in the always key 12 personnel (2 TE, 2 WR, 1 RB) grouping. If you think back to some of Ezekiel Elliott’s biggest runs of his career, they came out of a two tight end set. Flash forward to this season, there might not be a reliable backup tight end (maybe freshman Jake Hausmann) to run as many two tight end sets, so it might be up to Baugh to play almost every tight end snap. If you look back throughout Meyer’s career, he has always had a legit TE1 who has gone onto the NFL and Baugh will be next.

2015 performance: Per the team’s website, Baugh averaged 38 plays per game over the final eight games of the season. He only registered two receptions for 32 yards, but he was excellent as a blocker and came up huge on Elliott’s biggest runs.

Question marks: The Riverside, CA native is well-known for his off-field mishaps. It is now his turn to be a leader on the team and especially for his young positional group. He’s been able to hide behind Jeff Heuerman and Nick Vannett, but that is not the case anymore. If he stays in line, he arguably has more natural talent than those two guys who are currently in the NFL.

Conclusion: Baugh came to Ohio State highly touted and he now has the chance to put it all together. With the lack of known depth behind him, it looks like he will shoulder the majority of the load and if the spring game tells us anything, he will be highly involved in the passing game. Expect big things from Baugh in ‘16.