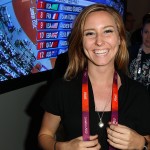 I am excited to introduce to all our fans at tBBC and all of Buckeye Nation to Amanda Furrer. A Graduate of The Ohio State University (2013) and a member of the Buckeyes Rifle Team, who was also a member of Team USA in the 2012 Summer Olympics in London. She is currently in trials for the 2016 Olympics Team which is held in Rio de Janeiro, Brazil.

Back in Oct. of 2015, The Buckeye Battle Cry ran an article on Amanda and her accomplishments as her journey to be a 2-time Olympian was beginning to unfold.

Amanda has graciously agreed to answer ten questions I sent to her – giving a little of herself back — to the proud Buckeye Nation that follows her progression and wishes her the best in the pursuit for gold.

tBBC: Can you share with your fellow Buckeyes how you got into the sport of shooting?

My dad got my mom into shooting pistols, and then he got my sister involved in rifle. My sister was born with mild cerebral palsy, limiting her ability to compete in sports that took a lot of physical coordination. My parents wanted us to be competitive in at least one thing growing up, so my dad found a junior rifle program that my sister could join. Once I saw how much fun she was having, I wanted to try it too! I was 10 years old at the time and the club said I was too young to join, so I begged my dad to teach me at home. He had me shooting air rifle out of one garage, and into a backstop that was set up about 10 meters away on the doors of our other garage. My dad got me all set up on a target with a backstop the size of a refrigerator box.

I shot a couple 10-bull targets, but we couldn’t see where any of the shots were through my spotting scope. It didn’t look like I had hit anywhere on the target, but I could have sworn I did! We walked down to where the targets were, and I had completely missed the targets, completely missed the backstop, and shot little dents all over the garage door. My dad never got it fixed and likes to show people those dents to this day. I guess it shows that you shouldn’t ever give up no matter how bad you suck at the beginning! I did improve from there, and eventually was old enough to join the Spokane Junior Rifle Team when I was 11.

tBBC: Being from the West Coast, Spokane, Washington to be precise, what attracted you to the Midwest & The Ohio State University?


Furrer: I had zero desire to go to the Midwest for school! I originally had a couple schools in mind (that I won’t name) that had shooting programs and also the academics I was looking for. I had already taken my official visits to those schools and was very close to committing, when my dad went online and found out that Ohio State had a rifle program. My dad is a finance guy and knew all about the Fisher College of Business.

When he brought up the idea of taking a visit, I shut it down saying I didn’t want to go, assuming that Ohio was all cornfields and no style. He finally convinced me to take an official visit, and on my first day there, I decided that Ohio State was where I wanted to go. I quickly realized that Ohio wasn’t all cornfields! I fell in love with everything about the university and the city. I can say without a doubt that my life wouldn’t have taken the path it has if I weren’t a Buckeye.

The Olympics, career opportunities, my friends…I am very grateful for the opportunity I had at Ohio State and everyone that was part of my journey there.

tBBC: I have looked over all of your accomplishments which are astonishing – you are amazing. Can you focus on any one event that sits in your memory more favorably than any of the others?


Furrer: Thank you! The one event that really sticks out to me was the 2012 Olympic trials. It was the culmination of everything I had been working for since I was a child. I guess it seems like I should say that the 2012 Olympics were my best memory, but there’s so much more to it than the competition itself.

I had to overcome an enormous amount of failures and doubts just to make the team. I had found a deep-rooted faith in God that year, and the way he had worked in my life that year, and particularly at the try-out, was undeniable.

I am proud of myself for following through with my dream. I’m thankful for my family, friends and coaches that helped me to get where I am. To describe the sacrifice and dedication necessary from myself and my entire family is something hard to put into words.

tBBC: Which event do you endear more – the 50m Three Position, or the prone Rifle and why?


Furrer: I definitely like 50 meter three-position the best! That’s always been my specialty. I do like prone rifle as well, but I really enjoy the challenges and complexities of shooting in the different positions. It’s difficult to be on top of your game in all three positions on the same day, which is what a match forces you to go for. I love it.

tBBC: I think every student at OSU had that favorite spot on campus where they loved escaping to – perhaps for some quiet time, or even for interaction. Did you have any such spot and if so where was it?


Furrer: Buckeye Donuts!!!!! That was an easy question. I used to go there all the time. Sometimes to grab a quick breakfast, sometimes for some food after a night out, and a LOT of times to get donuts!

tBBC: What was the best advice you ever received and did you follow it?


Furrer: I don’t know if I can pinpoint one particular piece of advice that was the best. I’ve always surrounded myself with people I can learn from, be it mentally, spiritually, or physically. I think it’s really important to always continue learning and growing however you can. Some things that have helped to guide me and that I always come back to are — 1) follow your passion — 2) never give up.

These were things I was always told, but didn’t take serious until I found myself doing the opposite. Once I experienced the negative repercussions of giving up and doing things I wasn’t passionate about, I worked, and continue to work my hardest to make sure I never end up in those situations again.

It’s also important to surround yourself with the people that see you and see your dream and would do anything to help you get there. Create an environment for yourself that allows you to grow and learn and become everything you want to be. Don’t allow anyone to put a cap on what you can do. See your dream, make goals, and then make your dream come true. You are in control!

tBBC: This is a tough one! Who, and it can be from any era, is your favorite OSU athlete and why?


Furrer: Jesse Owens! This one really doesn’t require any explanation. He overcame an incredible amount of adversity and dominated in his sport. I was honored when asked to display my 2012 Olympic opening ceremonies uniform next to his in the Jesse Owens Exhibit at Ohio State. It’s humbling when you learn about all the athletic success this man had. He truly is a hero to a lot of people.

tBBC: This is your second visit to the Olympics, 2012 in London being your first. What was your initial feeling when you arrived in London? And how do you think you’ll feel in Rio?


Furrer: I am still in the process of trying out for the 2016 Games. My trials will be the first week of April. I’m looking forward to it. Arriving in London was a bit overwhelming! Luckily, I had been to London before, so I wasn’t hit with the excitement of a new foreign city as well.

I got to fully take in the Olympic experience. I was completely surrounded by greatness. It’s still hard to believe that I was part of that. It was an emotional experience to be honest. I felt proud, excited, nervous, humbled, ecstatic; grateful…Everything I had worked for and dreamed of was right in front of me. There’s no better feeling.

tBBC: Obviously being in internationally competitive sports you log a lot of miles … is there any specific place you enjoyed most and can you share with us why?


Furrer: Ironically enough, Rio de Janeiro has always been my favorite place! I am a lover of sunshine, and Rio was full of it. I loved everything about the place! The Christ the Redeemer statue on Corcovado is one of the coolest things I’ve seen — a statue of Jesus towering over you and looking over the entire city.

I saw little monkeys running around on Sugarloaf Mountain. I got tossed around in the warm waters. The food was amazing — especially the authentic Brazilian Barbecue. I have enjoyed all the places I’ve been, but Rio stands out the most to me. I can’t wait to go back.

tBBC: What do you love most about The Ohio State University and being a Buckeye?


Furrer: The thing I love most about The Ohio State University and being a Buckeye are the people I’ve met along the way. I made some of my best friends there. There’s no better feeling than doing what you love, being where you love, and being surrounded by people that you love. Ohio State became home to me. I’m proud to be a Buckeye!

Thank you Amanda for sharing some of your thoughts with us. Please stop by to let us know how you are doing, or just to say “hi”. We at tBBC will be keeping an eye on you as you pursue one of the greatest athletic accomplishments possible – Gold.