Taylor Decker is quietly doing very well with the Detroit Lions
Harry Lyles Jr. via our friends at Land-Grant Holy Land
Visit their fantastic blog and read the full article (and so much more) here 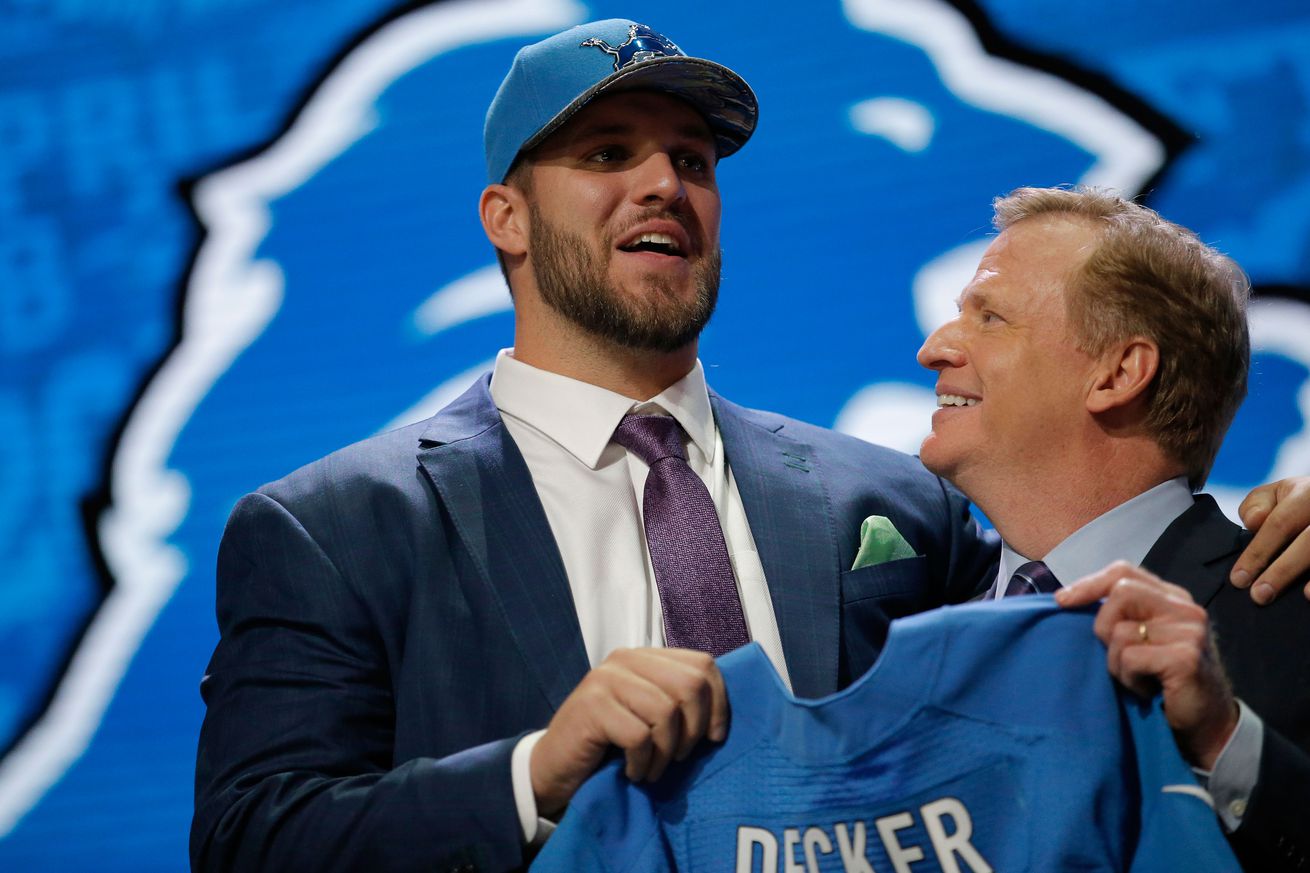 We expect no less from the former Buckeye.

“Taylor Decker didn't do anything to draw Jim Caldwell's eye during Tuesday's joint practice with the Pittsburgh Steelers. That's good news, when you're talking about rookie left tackles.”


You’ve heard a lot about the various Buckeyes who were selected in the 2016 NFL Draft this offseason, but Taylor Decker has seemed to fly under the radar. That’s probably a good thing, as it appears he’s been doing just fine, as MLive.com’s Kyle Meinke points out. Meinke talked to Detroit Lions head coach Jim Caldwell, who thought that Decker had done a good job considering he seemed quiet.

Caldwell told Meinke, “I didn't notice any glaring problems consistently, but I'll look at the film. He probably held his own. I didn't see any glaring problems.” Caldwell added, "But nothing jumped out at me. When it doesn't jump out at you, typically he's OK." Decker was considered one of the better offensive line prospects going into the draft, and it’s showing why. Sometimes the learning curve for offensive lineman is much greater for some than others, but so far Decker has made the Lions feel pretty good about their choice. They’ll really love him if he’s able to keep Matthew Stafford on his feet and healthy.


The Ohio State Buckeye reach has made its way to the 2016 Rio Olympic Games, and there’s been a pretty big upset today. It came in the form of fencing at Carioca Arena 3, when Eleanor Harvey shocked Italy’s Arianna Errigo by a score of 15-11. Errigo is the top-ranked foil fencer in the world.

Harvey, the junior from Ohio State, couldn’t believe her victory. The Columbus Dispatch described the celebration as such, “Harvey took off the mask, turned to the Canadian fan contingent near her piste in disbelief and pointed to her breast plate as if to say ‘Me? I did that?’”

“The Chargers and Bosa are now in a stare-down, each side not blinking.”


Joey Bosa and the San Diego Chargers remain deadlocked in a holdout. It seems very odd, considering we don’t see this with rookies anymore, especially since the 2011 CBA went into effect that preset the amounts that rookies receive in their initial deals. The stalemate between the two sides has been over payment terms on a signing bonus, and well as, according to Brandt, “The inclusion (or not) of offset language, giving the Chargers financial relief if Bosa were released during the contract and signed elsewhere.”

Bosa doesn’t exactly have leverage on the Chargers, who don’t seem to be in a rush to cave in for their 3rd overall pick. It’s an unfortunate situation for both sides, as Bosa is missing valuable time to get adjusted to the NFL game, especially with preseason games getting ready to start up very soon. Despite this, hopefully it turns out to be one of those stories where Bosa is so talented, the time he missed turns out to be insignificant. If the Bucks that came before him are any indication, this should be just a minor thing in the career of Joey Bosa.


Honored today to be a FREAK! Let's get it @Millerlite40 !! #3Stripes #TeamAdidas pic.twitter.com/gRNiSc5nj6

— Darron Lee (@DLeeMG8) August 9, 2016​
New York Jets linebacker and former Ohio State Buckeye Darron Lee has gotten an endorsement deal with Adidas. Adidas made noise back in February when they signed Von Miller and made him the face of their FREAK football cleat franchise. Lee will become a part of that group, and Miller welcomed Lee on Twitter.

Lee is a good choice for Adidas, especially if he turns out to be a stud. He’s playing in the largest market in the country, and if he’s able to help turn the Jets into a contender, it will be even better for the company that always seems to be a few steps behind Nike in just about everything. But to be in the same company and on the same (endorsement) team as Von Miller is pretty neat.


The Ohio State women’s volleyball team is ranked No. 15 in the AVCA Coaches Poll. The Buckeyes are competing in what is going to be a stacked Big Ten Conference this season, with Nebraska, Minnesota, Wisconsin, Penn State, and Illinois all inside the top 15. The first three of which are in the top 5, with the Cornhuskers the top ranked team in the country, getting all but four of the 64 first place votes.

The Buceyes finished 25-10 last season, and finished ranked No. 13. The team has a pretty good mix of under and upperclassmen this season, but does have six freshmen in comparison to four seniors, and three juniors. The Scarlet & Gray match will be on August 19 at 7 p.m., and the North Texas Challenge will be the start of the season a week later, when the Buckeyes are set to face Texas State, and North Texas at 1:30 p.m. and 7:30 p.m. respectively.