Sunday Morning Coffee: October 19, 1919
jcollingsworth via our good friends at Buckeye Battle Cry
Visit their fantastic blog and read the full article (and so much more) here 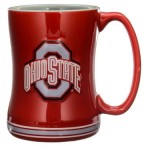 The young man exited the house at 970 Oak Street at exactly six-thirty in the morning. A chill was in the air – the cloudiness simmered any attempts of the sun’s brightness from unlocking any hopes of a nicer day.

The young man buttoned up the brown wool jacket he had just slipped his arms through as he stood on the porch. He first looked out at his brand new Model T Sedan that awaited him in the driveway to his parents’ home, of which he shared with them. A smile was immediate on his prematurely aging face. He loved the car. It had been a gift from a local dealer that was an alumnus of the Ohio State University.

Chic Harley was a three-time All-American for the Buckeyes. This was his final year and he wanted more than anything for it to be his finest. He loved the game of football, its brutality. He was also lettering in baseball and track and field. But football was his true love.

Every Sunday morning when Chic was in Columbus he would head for breakfast at Marty’s East Broad Street Diner. His parents enjoyed sleeping in on Sunday’s as it was their lone day off work. He wasn’t much of a cook, so since his High School days at nearby East High, Sunday’s was a trip to Marty’s. It was less than a quarter of a mile away – an easy walk – something he had always done. But since the beginning of this season and his Model T Sedan gift he drove the short distance enjoying the attention it mustered.

Chic slid into the front seat, cranking the engine. He looked through the windshield towards the sky. Was it to rain? He certainly hoped not he wanted to spin around town in his new automobile – even heading to campus.

As he rolled down the driveway into the street he began to think of the day before. Ohio Field was packed with spectators. He heard someone mention to Coach Wilce that it was easily around ten-thousand, if not more. And he and the Buckeyes gave that enormous crowd plenty to cheer for. Their opponent, the University of Kentucky, hadn’t a chance. Literally from the kickoff to the closing shot the Buckeyes seemingly scored at will.

Chic turned left onto Sherman Avenue. His thoughts continued to remain on the game against the Kentucky Wildcats of the day before. The score would be 49-0. Chic had a great day. He had scored two touchdowns, one from eighteen yards out on a quick sprint that gave the appearance that no one was anywhere near him. This made Chic laugh. There was one Kentucky player, a big lard of a guy, who got tangled up from a block by one of the Buckeye’s co-captains, Iolas Huffman, and Chic simply plowed through him, kneeing him in the head. It happened all so fast that those not on the field must not have witnessed the catastrophe – for that Kentucky player! His second score would be from thirty-three yards out. This one was more dramatic. Chic estimated he had ran over sixty yards to avoid any potential tacklers before scampering into the end zone. What was more pleasing for Chic was that he had also thrown two touchdowns on a halfback pitch-out – one went to Cyril Myers for a forty-one yard completion in the end zone. The other was a three yard toss to Gaylord Stinchcomb who broke two tackles to make it fifteen yards into the end zone. So, and this what Chic did not understand, he was given credit for an eighteen yard touchdown pass. But, hey, he’d take it. Each of the extra points too would be from Chic’s foot – his now famous drop kicks.

So all-in-all Chic scored an actual nineteen points against Kentucky but also contributed for an additional twelve. So as Chic pulled into the small parking lot at Marty’s he quickly calculated that of the 49 points they had scored against Kentucky the day before he was a factor in 31 of them. He hadn’t ever felt that star buzz that floated about of his prowess on the football field, but now in his senior year, parking his brand new Model T Sedan, he finally settled in on that very reality.

“Hey Star!” An elderly man came out of the diner’s front door to greet him. It was Marty himself.

“Marty!” Chic stepped from his car, shaking hands with one of his biggest admirers.

“The coffee is fresh. Let’s go get you a cup.” Marty wrapped his arm around Chic and led him into the diner.

The smell of fried eggs, cooking bread and bacon had Chic in the mood to eat. Boy was he hungry too. But first things first – he needed a hot cup of coffee.

As Chic sat in the booth that had always been where he sat since back in his sophomore year in High School he looked ahead. The up and coming Saturday they’d be heading to Ann Arbor to visit the Wolverines of Michigan.

“Michigan next week?” A small elderly man approached the booth. It was as if he had been reading Chic’s mind.

“Get ‘em star!” He seemed to be pleading.

Chic understood it was an important game. Their track record against the Wolverines wasn’t of any bragging nature. In seventeen previous meetings the Buckeyes lost fifteen of them and managed two ties. No victories. But Chic was confident that they would get their first win against the Wolverines of Michigan the following Saturday.

“Here you go star!” Marty slide a cup of coffee in front of Chic. He smiled and lifted the cup to his eager lips.