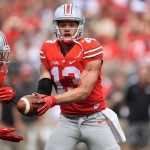 One of Ohio State’s young quarterbacks will miss his opportunity to compete for the backup position in fall camp.

Redshirt Sophomore Stephen Collier will more than likely miss the whole 2016 season after tearing the ACL in his left knee.

According to Eleven Warriors’ Eric Segar, the injury happened during Ohio State’s spring game on April 16. From 11W:


Collier is believed to have injured the knee during the Spring Game April 16, where he completed 4-of-11 passes for 154 yards for the Scarlet team. He completed a 55-yard bomb to receiver Parris Campbell down the sideline late in the game, which the Gray won 28-17. Collier also rushed four times for eight yards in the contest and impressed observers with the development in his game from the 2015 Spring Game.
​
Collier pretty much confirmed the news with a couple of tweets this afternoon.


Just gotta trust Him even though I can't see the plan. This is tough.

Time to make it shake. God got me.

The criminolgy major took a heavy amount of snaps this spring, as just one of two fully-healthy quarterbacks on the roster. He was in a competition with Joe Burrow for the backup spot throughout the spring, and played in his second spring game of his career.

The three-start recruit enrolled at Ohio State in May of 2014, after a spectacular senior year at Lee County High School in Leesburg, Georgia. Collier passed for 2,291 yards in his final year and added 24 touchdowns. He also rushed for 1,021 yards as the Southwest Georgia player of the year.

According to the report from Eleven Warriors, Collier had surgery to repair the tear and is expected to make a full recovery.