Recap: Tulsa vs. Ohio State
Richard Tongohan via our good friends at Men of the Scarlet and Gray
Visit their fantastic blog and read the full article (and so much more) here 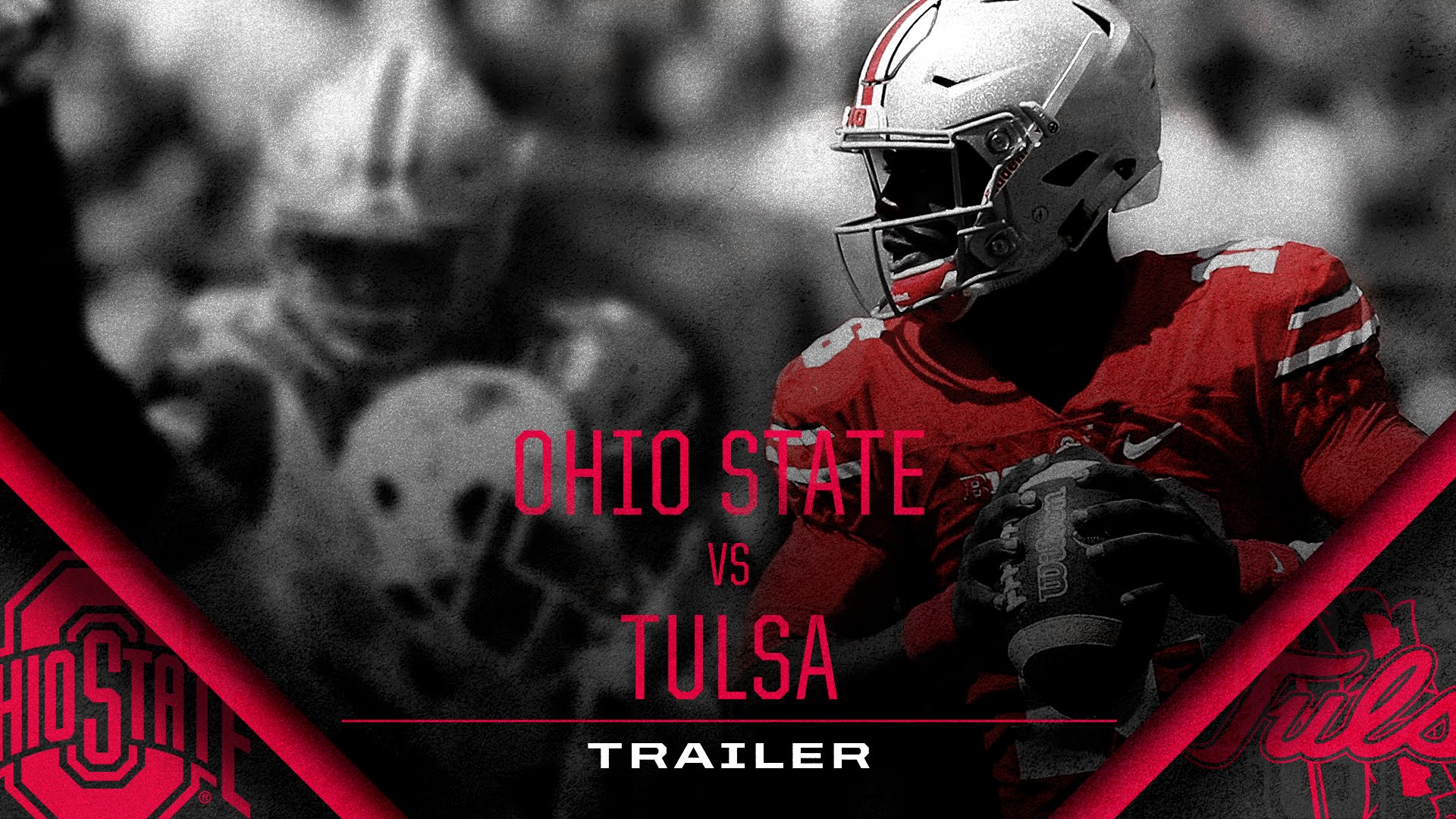 Well, it was a warm, sunny day but the swirling winds had hindered the Buckeyes offensive attack for the majority of the afternoon. With thunderstorms looming and the weather becoming more and more of a factor this was definitely not what I or most of us Buckeye fans wanted to witness. Although that isn’t a great excuse, the Buckeyes have no real excuse and they need a resounding win to further amplify their confidence prior to the showdown with the Oklahoma Sooners. This game definitely did not go according to plan as the mighty Buckeyes showed their youth and struggled mightily against an experienced Tulsa offense and a defense filled with Juniors and Senior looking to upset the home team and shock the world. 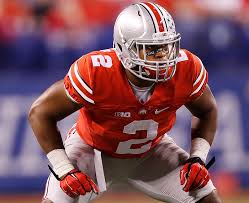 Marshon Lattimore, the oft-injured and forgotten man in the secondary came up huge for the Buckeyes. On the first offensive play for Tulsa he made an acrobatic catch for the early interception. The Buckeyes only managed to get a field goal, but a turnover was ideal due to the poor game conditions. For the life of me, I can’t figure out why the Tusla’s Head Coach decided to throw the ball, in the rain, prior to the first half ending, but I will take the end result as Marshon Lattimore was the recipient of another turnover and he returned it for 40 yards the pick-six. By the way, was I the only one who saw that nasty block by Malik Hooker? It is wonderful seeing the defense as a whole block downfield to ensure the maximum level of yardage is taken and with Hooker and Baker blocking downfield, accompanied by a caravan of Silver Bullets, he was bound to get into the end zone for the timely and sorely needed touchdown score. 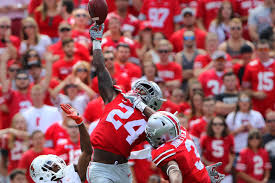 Speaking of Malik Hooker, he reeled in his third interception of the season, but this time was different, seeing that the previous two were acrobatic and amazing interceptions. This time around he flat out read the opposing Quarterback and took it in for six points, successfully establishing the swing in momentum and giving “juice” to the Buckeyes defense who was getting gashed by Tulsa’s high-octane offense. Tulsa ran the same group of plays repeatedly because they were seeing great success with them early on in the game, but once that was identified the defense pinned their ears back and let loose. Hooker came in tonight tied for first place in the nation for interceptions, but with this, he is now in sole possession in first-place. He has proven in two games that he is the playmaker that the Buckeyes secondary needs for them to unleash blitzes by the front seven. 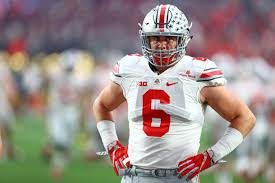 Sam Hubbard, Joey Bosa’s replacement came up huge with a sack on 3rd and long. He stopped the momentum dead in its tracks when the Buckeyes were reeling. With the first half over and the Buckeyes in the lead, the Buckeyes defense looks to carry over the momentum for a second half that will look different after the weather took a turn for the worse. Thunderstorms have the Buckeyes in a holding pattern and until they take the now wet and muddy field, we will have to see how the Buckeyes defense will adjust and react. I am thinking that they will turn up the heat a little bit to seal the game. The Buckeyes seem to be looking too far ahead to the game at Norman so hope they can take care of business and work out the kinks on both sides of the ball because the Sooners will be an early test in a young season. 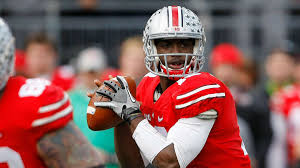 J.T. Barrett struggled mightily during the first half, only being able to muster up 69 yards through the air and 8 rushes for 16 yards. The weather has negatively impacted his ability to air it out and with the weather taking a turn for the worst, I am not sure if the second half will be any different. I understand that the weather is bad and that you are trying to be conservative, but you need to play it smart for the rest of the game. If that is running the ball down the Tulsa defenses throat, then I hope that the Offensive Coordinator calls more running plays to get Barrett into a rhythm because he needs it prior to Oklahoma. He definitely is making the correct plays, but he needs to get better and there is always room for improvement. I look for the Buckeyes and Coach Meyer to run the ball in the second half. 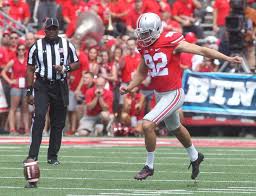 While filling in for banged-up Sean Nuernberger, Tyler Durbin has been a pleasant surprise for the Buckeyes and during the first half of the game, nailing a field goal early on for the 3-0 lead, then another one to break the 3-3 tie late in the first quarter. Durnin also nailed two extra points for the two defensive touchdowns that have extended the Ohio State lead. With the constant weather delays and with the terrible field conditions, I am assuming that the Buckeyes will not be looking for long range field goals and that they will play Tressel-ball for the duration of the game. I hope I am dead wrong, but we will just have to wait and see if Coach Meyer and company will do once the lightning vacates Columbus. 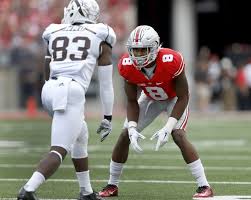 The second half started almost like the end of the first, except that this interception wasn’t returned for a touchdown. To open up the second, Gareon Conley was credited with the takeaway, ripping it away from an opposing Wide Receiver. What a way to open up the second half after a lengthy break due to the thunderstorm delay. The Silver Bullets, namely the secondary have been all over the place and unless Tulsa flat out gives up throwing the rock, they could be waiting to make the next big play. Although the loss of Eli Apple hurts the team in regards to experience, they retained Gareon Conley who has the leadership capabilities to lead a young, inexperienced secondary. And if we were to gauge what he has provided, I think he has succeeded with showing them the ropes and nuances of playing defense in the secondary at Ohio State. 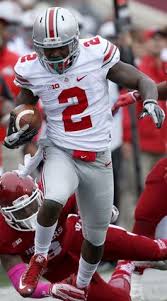 The second half offense was much more productive than the first half offense. J.T. Barrett started the half with a rushing touchdown and he received a monster block from Curtis Samuel. Later in the 4th, J.T. rushed for another score and the Buckeyes offense and defense started imposing their will on the hapless Tulsa Golden Hurricanes. Dontre Wilson has really come into his own in the second half. He began the second half with a 27 yard return and he got by a defender with the patented Brax Spin. Then he followed that up later in the second half when he blew past defenders for a 21 yard gain on the ground before he capped it off the drive with a 5 yard rushing touchdown. He showed us how elusive and quick he can be and I for one am happy that he finally found a place within the Buckeye offense. Coach Meyer has shown his ability to find players that fit his offensive scheme and with the many weapons at his disposal, he will look to build on this for a date with the Sooners. 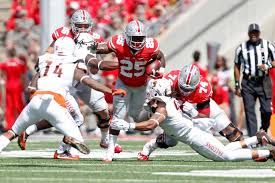 Running Back Mike Weber showed the grit and determination when running the ball tonight, occasionally running full speed, light feet and power. He racked up 92 rushing yards on 17 carries and he is constantly finding ways to improve as he grows as a man and as the “cadillac back” at Ohio State. He replaced the great Ezekiel Elliot and he can only improve to surpass Zeke. Weber scored his first touchdown in the second half and his number through two games aren’t eye popping but he will continue to improve as the season progresses. With a hostile environment in Norman next week, we will see Weber tote the rock more often, unless Coach Meyer and his offensive staff wants to air it out to prove a point. 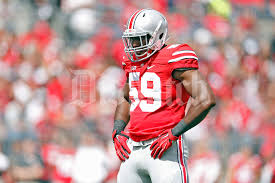 The Silver Bullets denied the Golden Hurricanes the entire second half with their stiffling defense. In the second half they had 2 more takeaways. A pick by Conley and a fumble recovery by Tyquan Lewis. Nick Bosa was destined to sack the Quarterback again, but the slippery ball slipped out of his grasp and it was all she wrote. The Buckeyes showed that their defense may be young, but they will be hungry and eager to prove that they belong in the National Championship conversation. They have a tough road game ahead of them and if this is any indication of things to come, they look to be scary good. Youth is a problem, but the talent is there and it shows. Let’s hope both units will hit on all cylinders. Onto the next one. Go Bucks!!!