LGHL Raekwon McMillan, Curtis Samuel, and Ohio State’s promise of everything and nothing

Raekwon McMillan, Curtis Samuel, and Ohio State’s promise of everything and nothing
Luke Zimmermann via our friends at Land-Grant Holy Land
Visit their fantastic blog and read the full article (and so much more) here 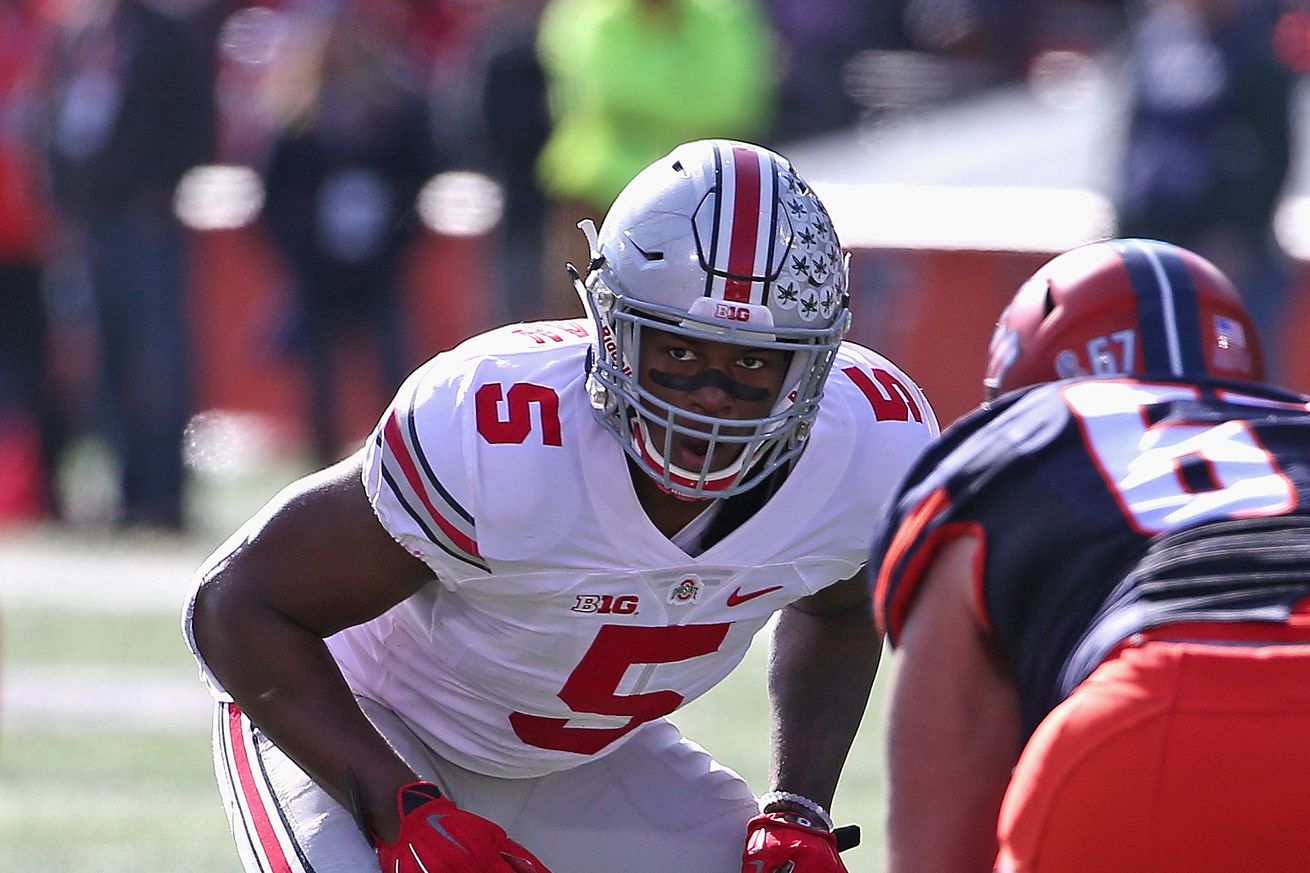 Stocks are calculated risks at best, but we’re feeling bullish about these Buckeyes.

Frank Ocean’s Blonde is the culmination of over four years of patience, two (or more) titles, two standalone releases, and internet memes a plenty.

Nearly five years after the release of his six-time Grammy nominated debut Channel Orange, Ocean’s sophomore studio album had begun to take on characteristics of Dr. Dre’s lost-in-time Detox. The only party arguably thirstier for a second proper Frank Ocean release than his fans was the press. And after at least one false start and “a visual album” — a lo-fi demo on steroids with an hourlong accompanying music video of Ocean literally doing woodwork — a second album materialized. Finally.

A love letter to excess and minimalism alike, the duality of Ocean on a personal level is captured perfectly in Blonde. The LP reflects the lateralization of his brain function to perfection: creativity and pragmatism slow dance together as science and art coexist.

Listening to Blonde isn’t splitting an atom, but there’s something quick, fleeting, and overwhelming about the 60-minute experience. The album builds to a slow burn while you’re in it, yet feels almost abruptly instantaneous when it’s over. The record isn’t perfect, but there’s something undeniably sexy about the wedding of near limitless potential and time.

College football’s offseason is both short-lived and imperishable. There’s no longer offseason in sport, but somehow the final week feels even more unbearable than the seven months and change after the bowl game. It’s been 230 long days since college football of consequence was in our lives. In six even longer days, Ohio State will take the field.

These Buckeyes marry limitless potential with the kind of self-governing realism we attach to youth. Asking 18- to 22-year-olds to consistently do something a few weeks in a row can be difficult. Asking that same group to do it 15 times in a little over four months is practically impossible.

Is this incarnation of OSU football the rewarding payoff of two years of cultivation and development? Or will it be but a trailer of something greater still a year (or more) away?

We’re six days from beginning to be able to answer that, but probably months from knowing for sure. And then the process starts anew.

The four-month season is certain to feel too short as well as too long. And these Buckeyes are sure to toe the line between being capable of accomplishing anything and failing to realize that potential.

Nothing is promised in sports and life. But when it all comes together — whether foreseeable or not — little is sweeter. Especially when you’ve had to wait for it.


This marks the dawn of five years of our projecting/reviewing Ohio State through the lens of the stock market — sort of. That’s longer than the seemingly impossibly long wait for Blonde. Almost everything good in life takes time. And patience is paramount to some of the market’s highest yields.

Urban Meyer’s fifth group of Buckeyes is arguably his most talented, but also his rawest. If these Bucks are going to emulate the improbable rise of their predecessors from two seasons prior, the margin for error will be razor thin.

Can these Buckeyes endure the growing pains necessary to reach their full potential without forcing an abrupt recalibration of expectations leading to an even longer wait? We’re about to find out.


Raekwon McMillan - McMillan’s commitment felt like the consummation of one of the earliest silos fired from Urban Meyer’s Ohio State industrial recruiting complex. Very seldom do players from the South make their way up north, particularly when their in-state school of rooting allegiance is nipping at their heels.

Besides giving Buckeye faithful a reason to celebrate in the middle of December 2013, McMillan’s arrival from Georgia as an early enrollee less than a month later started a process that saw him contribute as a true freshman during OSU’s improbable national championship run.

Last season as just a sophomore, what McMillan brought to the table was undeniable. On a defense loaded with future NFL Draft picks, McMillan shined bright, epitomizing the kind of modern era do-it-all linebacker elite Power 5 schools and NFL front offices both covet.

Now on virtually every defensive player watchlist in existence, McMillan looks to capitalize on being chosen a 2016 captain just days after the end of last season.

If you want to bet on one player on either side of the ball making a difference week in, week out, it’s No. 5 on defense.

Cameron Johnston - There’s something perfect about an Ohio State punter being the surest of sure bets. With the emphasis on special teams first established during the Jim Tressel era, Urban Meyer has taken OSU’s recent special teams love affair — from dishing out long snapper scholarship offers to flipping the field with authority every chance he gets — and continued to establish it as part of his teams’ identity.

Since coming over from the Australian Football League by way of Prokick Australia, the now 24-year-old’s been one of the steadiest parts of each OSU game since he first took the field in Ohio Stadium back in the fall of 2013.

After three seasons of high-level, rugby-style punting and already graduating from OSU, you wouldn’t have been faulted for expecting him to follow in the footsteps of former LSU specialist Brad Wing and turn pro. Instead, the Buckeyes are fortunate to trot out one of the best punters in the nation for one more year, and with him, an inherent special teams advantage.


Curtis Samuel: If there’s one player Ohio State coaches have talked up more than any other, it has to be the Brooklyn speedster. The latest in a long-ish line of “make sure you say he plays the Percy Harvin position” commitments under Meyer, Samuel has managed to show flashes of things to come during his two seasons in Columbus, but hasn’t really exploded in the offense the way many recruiting analysts projected he would.

With the skills to play running back, H-back, and wide receiver, 2016 has all the makings of the year the Ohio State offense embraces Samuel’s versatility for what it is.

And with a career average of 6.9 yards per carry on the ground and 14.8 per touch receiving, it’s easy to understand why the OSU offensive coaches are thrilled they’ll have a weapon in the mold of Samuel for at least one more season.


The kicking game: Sean Nuernberger is one of our favorite players on the Ohio State football team. Any scholarship kicker with the audacity to make his Twitter handle @Sean4Heisman1 can’t be anything but likable.

Despite a national championship to his name, Nuernberger has struggled to find consistency during each of his first two years in scarlet and gray. Last season, Duke graduate transfer Jack Willoughby had every opportunity to take Nuernberger’s job from him due to the instability.

Though Nuernberger managed to regain a foothold on the gig by 2015’s end, few would feel particularly assured about kickoffs and field goal attempts alike heading into the fall.

If the German-born son of a former Olympian can discover his zen place while continuing to improve on his form, the sky’s the limit. If he doesn’t, you could see the Buckeyes go for it on fourth down more than any other time in recent memory.


Buy: Noah Brown — Expected to be the No. 2 wide receiver behind Michael Thomas a year ago, Brown is back after a broken leg robbed him of what was set to be his breakout season.

There’s a lot of reasons to feel optimistic that Brown can be J.T. Barrett’s most reliable target from September up through the postseason.

Sell: Tight end depth — Marcus Baugh reportedly showed up to camp out of shape after a brilliant spring.

With just true freshmen behind him, if Baugh can’t stay out of Urban Meyer’s doghouse, particularly given the inexperience at wide receiver, the narrative about the Buckeyes ignoring their tight ends might just have legs another season.

Buy: One of the young defensive backs breaking out — While it’s green as can be, there’s too much talent in the Buckeye secondary for someone not to be a household name by year’s end.

Whether it’s Malik Hooker, Erick Smith, Marshon Lattimore, or Damon Webb, you’re going to have a new favorite player by the holidays.

Sell: The increased schedule strength being all good — It’ll be fun not to be reminded over and over what a weak schedule Ohio State’s playing. It won’t be fun sweating taking an extremely young team on the road to face the defending Big 12 champion Oklahoma Sooners.

Throw in OSU’s most rigorous Big Ten slate in years and you’re staring down a slate of perpetual trap games.

The Buckeyes will be battled tested if they survive the gauntlet. That’s a mighty big if at this point, though.