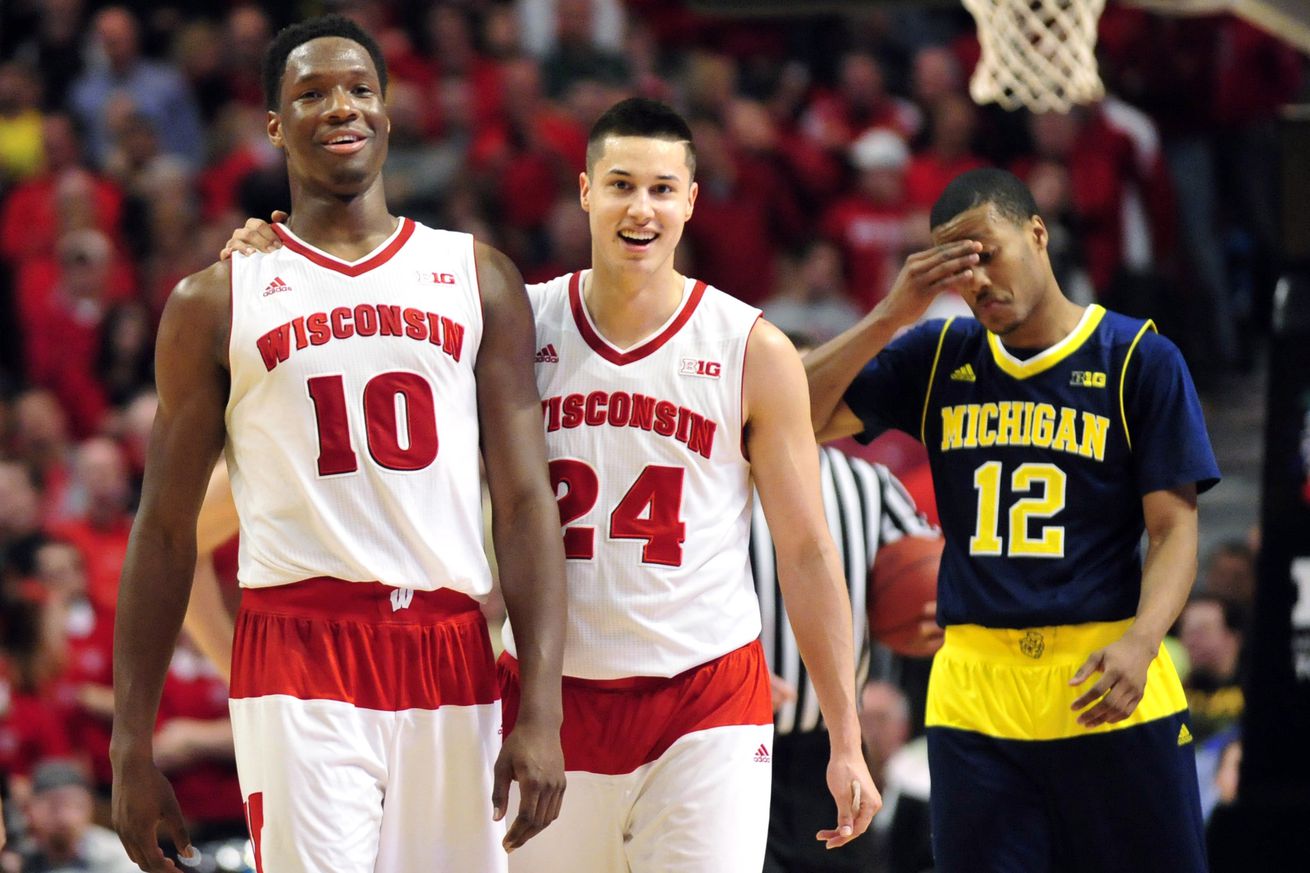 Though their core remains intact, the Buckeyes still aren't quite ready for Big Ten title contention.

The dust has settled from Wednesday's deadline for underclassmen to decide whether to return to college or embrace their professional dreams. With rosters virtually set in stone for the 2016-17 season, there's no better time than now to see how the pecking order in the Big Ten could shake out next winter.

Why they're here: New coach Steve Pikiell has his hands full inheriting a Rutgers program that has not been to the NCAA Tournament since 1991 and has gone 3-33 in its first two Big Ten regular seasons.

Why they're here: With the suspension of transfer Reggie Lynch earlier this month, coach Richard Pitino has had to suspend or dismiss seven different players since the start of the 2014-15 season because of off-the-court transgressions. It will be interesting to see how long of a leash new Minnesota athletic director Mark Coyle grants Pitino moving forward.

Why they're here: With White, who averaged 16.8 points per game in 2015-16, deciding to put off his pro dreams, Nebraska suddenly has an interesting backcourt mix, with the 6-7 White joined by Webster and a pair of transfers in Anton Gill (Louisville) and James Palmer (Miami, Florida). On the flip side, coach Tim Miles has to find production from what appears to be a limited frontcourt.

Why they're here: Coach Pat Chambers hopes to reinvigorate his program with what is an unprecedented recruiting class by Penn State standards: two four-star recruits (point guad Tony Carr, wing Lamar Stevens) and a pair of three-star players (power forward Joe Hampton, wing Nazeer Bostick), a group ranked fourth in the Big Ten and 26th in the country by 247Sports. Factor in the presence of UConn transfer Terence Samuel and the return of Garner, the team's second leading scorer last year, and the Nittany Lions have constructed the foundation of a promising backcourt and wing rotation.

Why they're here: The Hawkeyes should probably be lower on the totem pole, but consider this placement a vote of confidence in coach Fran McCaffery's player development system, which has recently transformed Uthoff, Jok, and Aaron White from three-star recruits into Big Ten stars.

Why they're here: The Wildcats are still a year away from a very real chance at their first-ever NCAA Tournament bid, but a step forward in 2016-17 is possible with further growth from McIntosh, Falzon, and Pardon, as well as the return of Law from a shoulder injury that wiped out the former four-star wing's 2015-16 campaign. The losses of Demps and Olah, Northwestern's first and third leading scorers last season, respectively, should not be underestimated, though.

Why they're here: The dismissal of Nunn, the team's second leading scorer in 2015-16, is a blow that should be softened by the surprise return of Throne Jr., a 6'11 forward who averaged nearly 13 points and nine boards in eight games last season. The continued development of Hill (18.1 ppg in 2015-16) and Coleman-Lands (42 percent from 3) plus the addition of intriguing Cleveland-area swingman Kipper Nichols provide the Fighting Illini with real hope after two consecutive disappointing seasons have left coach John Groce on thin ice.

Why they're here: Trimble's 11th-hour announcement of his return to College Park on Wednesday spared the Terrapins from a rebuilding season. Sans Stone, Carter, and Layman, Maryland will likely become more of a small-ball squad in 2016-17; four-star guards Anthony Cowan and Kevin Huerter enter the fray next year, with Wiley coming back from injury.

Why they're here: Thad Matta is going to ride or die with his six major returnees over the next two seasons, a group that will be charged with ensuring Ohio State begins to resemble more of the program that averaged nearly 30 wins and a third-place finish in the Big Ten from 2010-15. Keep an eye on the newcomers: JUCO combo guard C.J. Jackson and the three freshmen (Derek Funderburk, Micah Potter, Andre Wesson), as there's a strong possibility that at least two of the newbies will find their way into consistent playing time.

Why they're here: Holy roster turnover, Batman. Since the season ended, the Wolverines have seen Doyle, Dawkins, Chatman, and Albrecht transfer out of the program, thinning out what had the potential to be a very deep team. Much like Ohio State though, Michigan's core (Irvin, Walton Jr., Robinson, Abdur-Rahkman, Donnal) was always going to determine its 2016-17 ceiling. One newcomer to watch is freshman point guard and 2016 Ohio Mr. Basketball Xavier Simpson. As MLive noted in March, the last Mr. Basketball to attend Michigan was former national player of the year Trey Burke.

Why they're here: With Swanigan and Edwards putting off the NBA and the 7-foot Haas due for more minutes with Hammons out of eligibility, the Boilermakers' strength will remain with its sturdy frontcourt. Purdue also has just enough depth at guard with Thompson, Cline, Mathias, and Michigan transfer Spike Albrecht to remain a fringe Big Ten title contender.

Why they're here: Consider the Spartans' ranking an investment in the future, as Tom Izzo will look to mesh veterans like Harris, Schilling, and Nairn Jr. with one of Michigan State's best-ever recruiting classes, a group ranked No. 4 in the country by 247Sports and anchored by five-star wings Miles Bridges and Joshua Langford. Bet on the 2016-17 Spartans returning to the program's defensive roots -- the past two seasons Michigan State has finished outside the top 30 in Ken Pomeroy's defensive efficiency rankings; prior to that the last time the Spartans were outside the top 30 was 2007-08 -- and worrying about replacing nearly 65 percent of the team's scoring later in the season.

Why they're here: The return of Blackmon Jr. and Bryant ensures that the Hoosiers will have a chance finishing in the top 10 of KenPom's offensive efficiency rankings for the third year in a row. Blackmon, a junior-to-be guard, missed most of last season with a knee injury and isn't much of a passer at this stage (1.7 career assists per game), but he is an elite shooter from 3 (41 percent). Bryant is a burgeoning paint monster who shot 68 percent from the field a year ago. Lastly, keep a close eye on the development of Anunoby, whose diverse skill set needs only catch up to his spectacular athleticism.

Why they're here: The Badgers return every player of note from a squad that finished the regular season by winning 11 of its last 13 games and upsetting second-seeded Xavier in the second round of the NCAA Tournament. The return of Hayes -- who has never failed to reach the Sweet 16 in his previous three seasons at Wisconsin -- provides the Badgers with a potent inside-out threat to pair with Koenig's 3-point shooting (39 percent in 2015) and Happ's paint prowess (12.4 points, 7.9 rebounds per game in 2015). Factor in the tranquility provided by athletic director Barry Alvarez's full commitment to coach Greg Gard, and Wisconsin is the team to beat in the Big Ten.