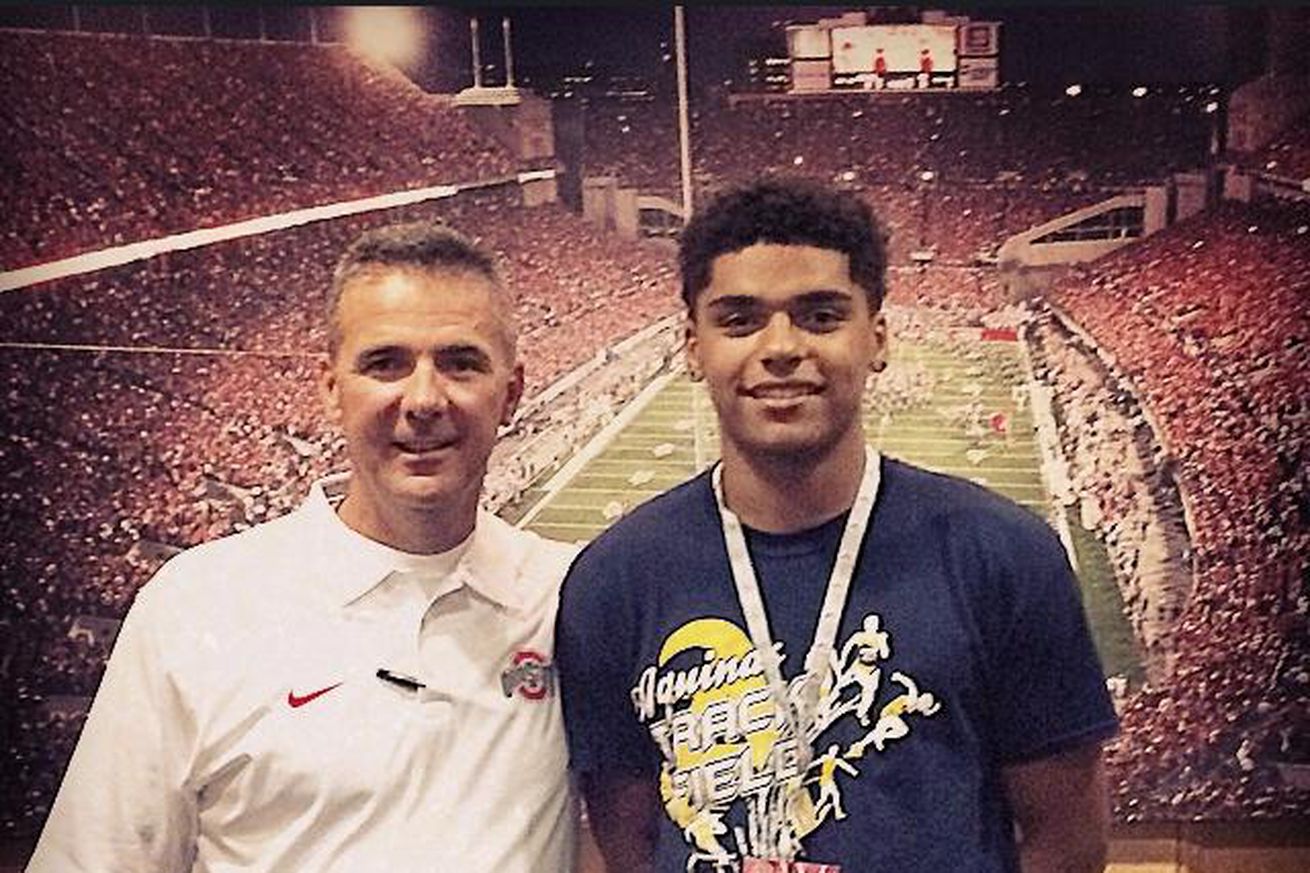 National Signing Day 2016 is officially over, and Ohio State shifts its focus to 2017 and beyond.

Ohio State just signed an incredible 2016 class this past Wednesday. The Buckeyes were able to hold on to be named a top three consensus national recruiting class. With tremendous effort from each football staff member, Ohio State continues to be one of the leaders of recruiting in all of college football. However, as we've heard from Urban Meyer countless times, recruiting never stops. The pursuit for the 2017 class and beyond is now in full force.


The 2017 class for Ohio State is certainly off to an incredible start. With ten commits already, Urban Meyer is wasting no time pushing for more of the nation's top prospects. One prospect Ohio State has turned on their full pursuit for is the nation's top ranked wide receiver in the 2017 class: Trevon Grimes. Grimes, of St. Thomas Aquinas (a school that has been nothing but great to the Buckeyes), recently received the title from scout.com. He is not only their top receiver, but also earned his 5-star ranking.

While Grimes is either ranked as the top or second-best receiver in the 2017 class by every major recruiting service, the Buckeyes are in great position already with the 5-star. The 6'3, 180-pound star has been very vocal that Ohio State is his leader. Despite being a Florida kid, Ohio State's relationship with Grimes has the added benefit of the comfort zone at St. Thomas Aquinas, where the Buckeyes recruit very heavily. Currently, Ohio State owns 95 percent of the predictions on the 247Sports Crystal Ball for Grimes' college destination, but time will certainly tell.

The long list of receivers to don the Scarlet and Gray is an impressive one. The most recent Buckeye star receiver, Michael Thomas, has even let it be known that Grimes is worth the attention from Ohio State. Enjoy the ride, Buckeye fans. 2017 will be a class for the ages.


Sticking with the 2017 wide receiver trend, another top prospect the Buckeyes are on the trail for is Detroit, Michigan Cass Tech athlete Donovan Peoples-Jones. Peoples-Jones, like Grimes, is either listed at one or two as the nation's top receiver. For Ohio State to be in such good standings with both of these highly-touted recruits just speaks to the success Urban Meyer has with the most elite players in the country.

Because recruiting never stops, when one class is signed and official, the pursuit for the next season has already begun. Even on National Signing Day for the 2016 class itself, Urban Meyer wasted no time getting to the 2017 class as he was on the phone calling Peoples-Jones putting in efforts for the Buckeyes. The young receiver even made it known how important this call truly was.

While it's still extremely early to predict where Peoples-Jones lands, Ohio State and Michigan State lead the way on the 247Sports Crystal Ball prediction. The 6'2, 195-pound prospect will surely take his time in deciding where to play his college ball, but rest assured, Ohio State is in good position with Michigan's top 2017 product.

Just got off of the phone with Coach Meyer from Ohio State ! It means a lot...


The 2017 class is already off to a more than impressive start, and the pursuit to have more of the nation's best prospects continues at full speed. On the defensive side of the ball, Lamont Wade of Clairton, Pennsylvania is one of the top targets on the board for Ohio State. Recently, Wade was also one of the names that was awarded a 5-star ranking by Scout.com.

According to Scout, he is the second-best cornerback in the class, while at 247Sports he is ranked as the sixth-best. It's easy to see that Wade is a top prospect regardless of the recruiting service. Fortunately, for Ohio State, the Buckeyes were able to host Wade at last weekend's junior day visit in Columbus. While there's a long way to go before signing day 2017, the 247Sports Crystal Ball prediction has Ohio State running away with the lead for Wade's services.


Blessed to be named a 5-Star on scout But I'm still not #1 yet...#CountYourBlessings but #StayHungry