Ohio State women's basketball survives a scare against Penn State, 77-63
Ben Martens via our friends at Land-Grant Holy Land
Visit their fantastic blog and read the full article (and so much more) here 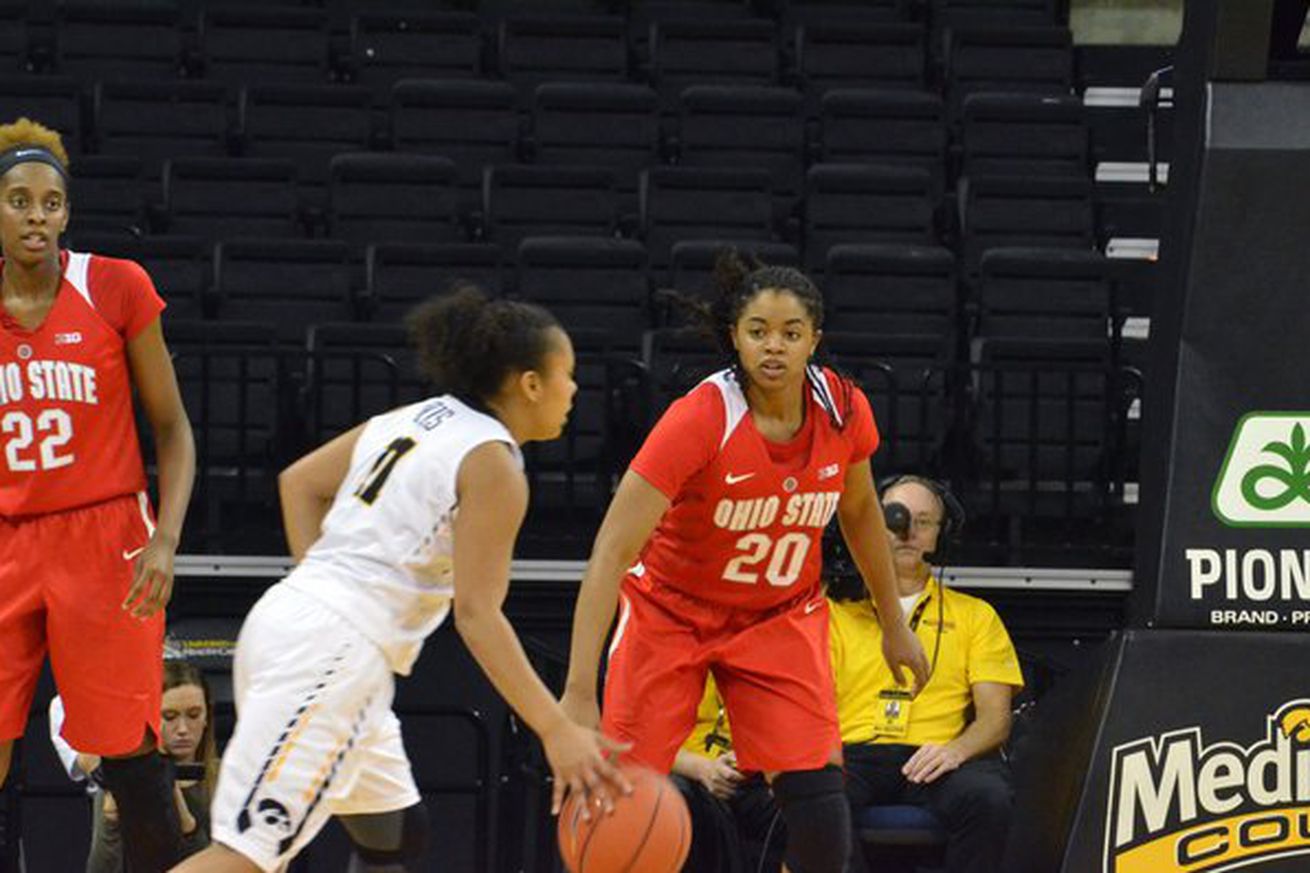 The Buckeyes needed all of Ameryst Alston's career-high eight three-pointers to beat back the Nittany Lions on the road.

Ohio State senior Ameryst Alston had her self a game for the women's basketball team on Sunday against Penn State. The Canton McKinley product knocked down a career-high eight three-point shots, scoring 26 points to lead the Buckeyes to a 77-63 win in Happy Valley.

"We couldn't have won without her playing like that," head coach Kevin McGuff said after the game. "She really made Penn State pay from the perimeter."

A sluggish offensive performance by Ohio State may have given future opponents a blueprint for slowing down its high-powered offense. The Nittany Lions employed a smothering 2-3 zone, holding the Buckeyes to 41 percent shooting and forcing them to hoist 34 shots from the beyond the arc.

"You can't take any team lightly in this conference," Alston said.

The game started extremely sloppy on both sides as nearly three minutes elapsed before there was any scoring. The teams combined to miss their first seven shots and turned the ball over seven times before Penn State sophomore Lindsey Spann completed a three-point play.

Alston finally got Ohio State on the board with a pair of three-pointers as the Buckeyes seemed flummoxed by the Nittany Lions' zone. Ohio State missed its first five shots, and shot just 31 percent with eight turnovers in the first frame.

Penn State, coming off an upset win of nationally-ranked Michigan State, got long distance buckets from Spann and senior Brianna Banks to take a 9-6 lead midway through the first quarter.

The Buckeyes endured another three minute scoring drought, but sophomore Makayla Waterman got an offensive rebound and put-back to end the scoreless streak. She was also fouled and made the free throw. Alston then knocked down her third triple of the quarter to draw Ohio State back to within one point at 13-12.

Sophomore Kelsey Mitchell, the fourth-leading scorer in the country, got her first bucket of the game with under a minute remaining to put the Buckeyes on top, but a Banks jumper gave the Nittany Lions a 15-14 advantage after 10 minutes.

In the second quarter, it was Penn State's turn to struggle. The Nittany Lions turned it over four times as they went nearly three minutes without a bucket. Mitchell knocked down a pair of three-pointers and Waterman hit two jumpers from the high post to give Ohio State a 26-17 lead.

Spann scored another five points on a layup and a three, and the Buckeyes missed eight straight shots, allowing Penn State to trim the lead to 27-24. The Maryland native led all scorers in the first half with 15 points.

An Alston three-pointer ended a four minute scoring drought, sophomore Asia Doss got a breakaway layup off a steal, and junior Shayla Cooper hit a corner three as Ohio State surged back out to a seven point lead in the span of twenty seconds.

Going to the locker room, the Buckeyes were up 37-30. Alston had 12 points on 4-for-7 shooting from beyond the arc to lead the way as Ohio State shot a meager 36 percent from the floor, made 7-for-20 from deep, and turned it over an uncharacteristic 13 times.

Alston continued her long distance barrage on the Buckeyes' first two possessions of the second half, hitting her fifth and sixth three-pointers of the game, surpassing her previous career-high.

But Banks and Spann knocked down threes of their own and assisted on easy layups for juniors Peyton Whitted and Kaliyah Mitchell to pull back within three points. A Mitchell jumper capped a 9-0 Nittany Lion run and prompted a timeout by Ohio State, up just 43-42.

The Buckeyes again went better than three minutes without scoring as they continued to struggle against Penn State's zone defense. A Banks layup off a steal on a lazy pass from Cooper put the home team back on top by a point.

Mitchell made her third three-pointer of the game as Ohio State reclaimed the lead in what became a back and forth affair. There were eight ties or lead changes in the quarter.

Alston made her seventh triple with two minutes remaining in the quarter and Mitchell attacked the rim for a dribble drive layup as the Buckeyes went to the final frame in a dogfight, clinging to a 55-52 lead.

Another make from beyond the arc by Spann, who paced Penn State with 21 points in the game, got the Nittany Lions off to a good start in the fourth quarter and Ohio State again went nearly two minutes without a field goal. But both sides were sluggish and very little scoring took place as the Buckeyes maintained a 62-57 lead.

Senior Cait Craft hit a huge corner three, her first field goal of the game, with just under four minutes to go, pushing the lead back out to seven at 65-58, and penetration by Mitchell set Alston up for her eighth three-pointer.

A nice high-low run by Cooper and sophomore Alexa Hart resulted in a three-point play and gave Ohio State their largest lead of the game, 71-60, with under two minutes remaining. The Buckeyes held on from there, escaping the Bryce Jordan Center with their ninth consecutive win.

Mitchell finished with 17 points, shooting just 3-for-13 from distance, and Hart racked up yet another double-double with 12 points and a game-high 15 rebounds.

Ohio State returns home on Thursday to host Nebraska. The game tips off at 6:00 p.m. ET and will air live on Big Ten Network.