Ohio State vs. Northwestern 2016 final score: 3 things to know from OSU's 71-63 win
Brett Ludwiczak via our friends at Land-Grant Holy Land
Visit their fantastic blog and read the full article (and so much more) here 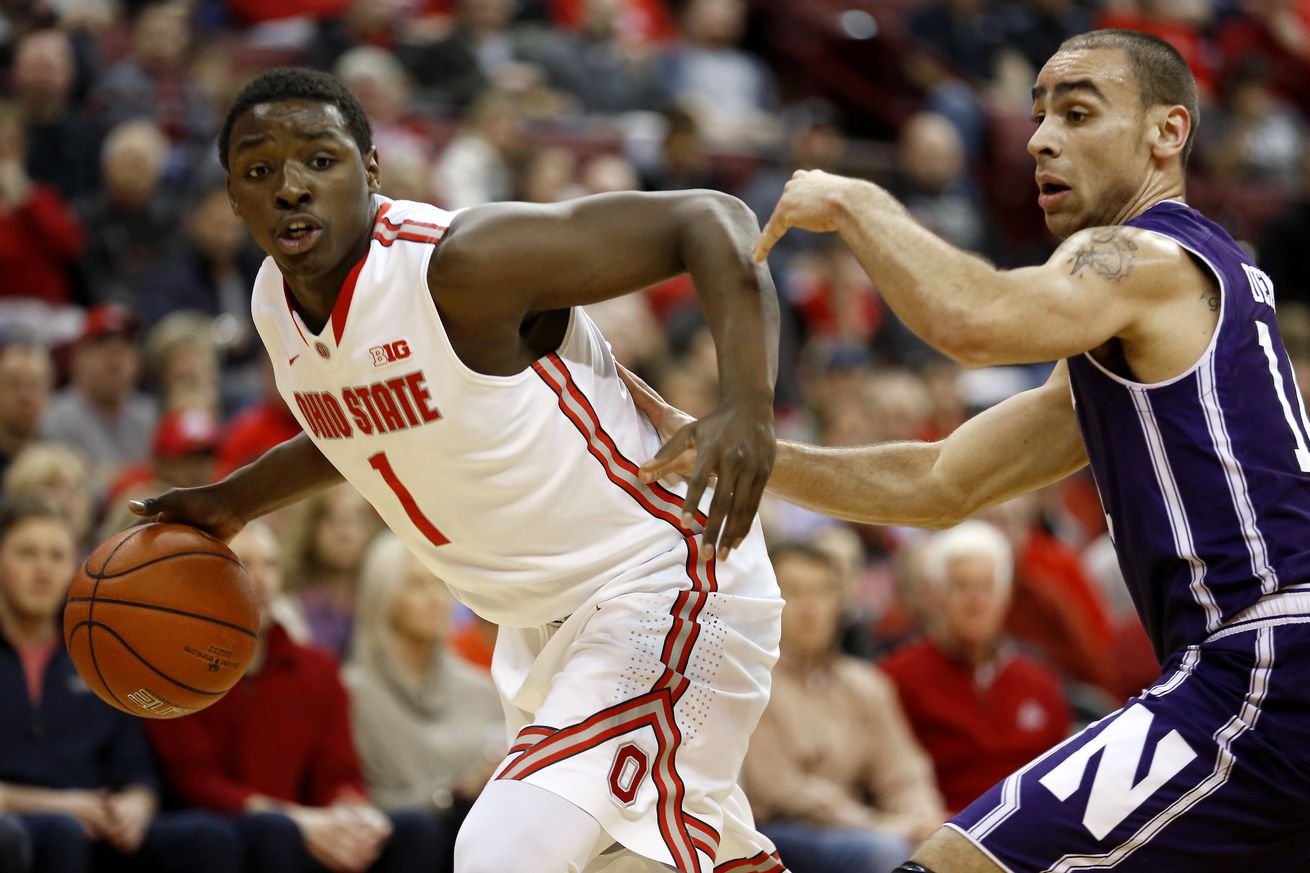 Ohio State survives Northwestern's barrage from behind the arc, denies Wildcats first win in Columbus since 1977.

Early in the game it looked like Northwestern was dialed in from long distance, as Tre Demps and Bryant McIntosh each hit a three-pointer in the first two minutes to lead the Wildcats to an early 6-2 lead. Ohio State responded with a 7-0 run of their own to take a 9-6 lead into the first television timeout.

From there Northwestern continued to have great success from behind the arc, punctuated by a stretch with just under seven minutes to go in the first half where back-to-back three-pointers from Aaron Falzone and Tre Demps forced Thad Matta into taking a timeout with Ohio State trailing 24-14. At that early stage of the game, Northwestern was 6-10 from three-point range.

Not only was Northwestern excelling from long range, but they were also dominating Ohio State on the boards in the first half. At halftime the Wildcats had a 25-15 edge in rebounding, with 10 of those rebounds coming on the offensive end. What helped Ohio State stay in the game despite Northwestern hitting six three-pointers was the eight turnovers the Buckeyes forced. Marc Loving led Ohio State with 10 points at halftime, while Tre Demps was topped Northwestern's score sheet with nine points after 20 minutes.

The beginning of the second half looked like how the first half started. Bryant McIntosh hit a couple three-pointers to help to give Northwestern a little breathing room, but the Buckeyes were able to cut the lead to 39-37 before a three-pointer from Gavin Skelly quieted some of the Ohio State momentum.

With Ohio State down 48-39 with just over 10 minutes to go in the game, the Buckeyes put together a 8-0 run that was punctuated by a couple steals that led to easy buckets for Keita Bates-Diop and JaQuan Lyle. Northwestern head coach Chris Collins took a timeout after Lyle's bucket, but Ohio State didn't let up on the pressure, and forced another turnover immediately after the timeout.

With the pressure defense Ohio State employed in the latter stages of the game, Northwestern had a hard time holding on to the basketball. Late turnovers were a big reason as to why the Buckeyes were able to secure the 71-63 win. Northwestern ended the game with 14 turnovers, while Ohio State only ended up turning the basketball over five times.

All five starters reached double figures in scoring for the Buckeyes, with JaQuan Lyle leading Ohio State with 16 points. After scoring 10 points in the first half, Marc Loving finished the game with 15 points and also had five assists. Trevor Thompson had 12 points and just missed out on a double-double with nine rebounds.

Northwestern had four players hit at least two three-pointers and finished the game with 12 three-pointers. Bryant McIntosh and Tre Demps each scored 14 points to lead the Wildcats in scoring. The effort from the guards wasn't quite enough though to help Northwestern earn their first win in Columbus since 1977.


1. Despite what people may think, Marc Loving isn't broken yet. Sure the performance from the junior has been underwhelming over the past month, but Loving is still Ohio State's best player. What helped Loving in this game was a few of his shots fell early, which allowed him to gain some of the confidence that has been desperately lacking lately. Loving was able to hit a couple three-pointers early in the game, which also made Northwestern pay some extra attention to hit, and allowed for some more open opportunities for his teammates.

What has been so frustrating for Ohio State fans lately is just by his body language many think that he doesn't care all that much. It's hard to fault a college student for not playing exactly how fans think he should be playing. Loving isn't going to exhibit the same emotion that a player like Aaron Craft does, but that doesn't mean he isn't still valuable to this Buckeye team. While Ohio State's tournament chances are pretty much non-existent barring a Big Ten Tournament title, Loving is still the elder statesman of this team, and still has plenty of value when he is on the court.

2. Jae'Sean Tate does the things nobody else wants to do. Every team has that one player who scraps for everything and plays a lot bigger than his height. For Ohio State that guy is Jae'Sean Tate. Even though the Pickerington native is just 6-4, there are times when it seems like he is a seven-footer. It's so impressive to see Tate do a lot of his offensive work in the paint and still have success against opponents who he is giving up sometimes six inches or more in height. In a season filled with inconsistencies for the Buckeyes, it could be argued that Tate has been the most consistent Ohio State player.

Last year Tate's hustle earned him more playing time as a freshman, and his growth has carried over to this year. Being a bit undersized for his position, it's likely that Tate will end up playing all four years he is eligible at Ohio State. It'll be interesting to see Tate's growth as a player on the court by the time he is a senior. There are areas where he needs to improve, mainly at the free throw line, but if he can continue to improve the rest of his time in Columbus like he did from his freshman to sophomore year, Buckeye fans will be in for a fun ride watching Tate continue to evolve.

3. JaQuan Lyle has found his groove again. Much like how Marc Loving has struggled over the past month, JaQuan Lyle has been going through his own issues on the court. Those problems seem to something that Lyle has worked through. Lyle had 18 points in the first half against Wisconsin, and finished the game with 27 points in the loss. With that performance, Lyle regained his spot in the starting lineup. Had it not been for some foul trouble early in the first half, Lyle probably would have had a higher scoring output.

It was obvious during his slump that Lyle was struggling with confidence issues, but it's amazing what hitting a couple buckets can do. A.J. Harris did a solid job in taking over for Lyle when Lyle was removed from the starting lineup, but it's obvious Ohio State is a different team with Lyle getting the bulk of the minutes. As long as Lyle doesn't fall into some the bad habits that he exhibited during the stretch in which he struggled, Lyle will be just fine going forward.