Ohio State vs. Minnesota 2015 final score: 3 things to know from OSU's 78-63 win
Harry Lyles Jr. via our friends at Land-Grant Holy Land
Visit their fantastic blog and read the full article (and so much more) here 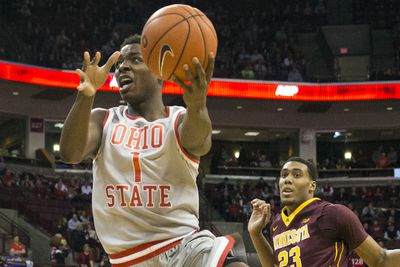 The Buckeyes get their first win in conference play over Minnesota.

The young Buckeyes got their first win in Big Ten Conference play in as many tries Wednesday night, as they knocked off Minnesota 78-63.

Ohio State could not have gotten off to a better start Wednesday night. The Buckeyes started off the game on an 11-0 run, with Minnesota scoring their first points at the free throw line from guard Nate Mason with 16:20 left in the half. The Buckeyes would lead 11-4 at the under-16 timeout.

The Ohio State tear would continue, with a Keita Bates-Diop jumper, an emphatic dunk by Daniel Giddens, and a Marc Loving three on consecutive possessions got the Buckeye crowd at the Schott on their feet, forcing a Minnesota timeout up 18-4.

The game began to slow up a tad, but Ohio State maintained their lead, as the two teams traded baskets, until the Gophers full court pressure got them back into the game. The Gophers went on a 9-0 run to trim the Ohio State lead to 26-20 with just under seven minutes remaining in the first half.

Ohio State would get it back together, and it looked like they had found their groove from earlier after a Daniel Giddens dunk put the Buckeyes up 36-24 with just over two minutes remaining. But Minnesota fought back, and went on yet another run.

The Golden Gophers would bridge the gap, thanks to a pair of free throws from Joey King, two Ahmad Gilbert threes, and another pair of free throws, these from Carlos Morris. At the half, the Gophers found themselves down 37-34, closing out the half on a 10-1 run.

The second half, we saw a much tighter contest. Minnesota came out and took the lead in the first minute and change at 39-37. A Keita Bates-Diop dunk, and a pair of free throws gave Ohio State its lead back. The teams would trade baskets, with some sloppy play and questionable calls.

And then Ohio State found that rhythm once again.

The Buckeyes went on a 12-2 run, making five baskets that were all assisted by JaQuan Lyle. If there was an open Buckeye, Lyle was going to find him. The Buckeyes found themselves up 56-46 with just over 10 minutes to go in the game.

Ohio State really held firmly onto the lead from there, with Minnesota continuing to turn the ball over, and the Buckeyes quick ball movement, solid defense, and shot making ability. The Buckeyes were up 72-55 with just under three minutes remaining, and the game was never in question from there.


1. Trevor Thompson can be a huge factor. In the opening minutes of the game, Trevor Thompson was taking down the bulk of the rebounds. In the 11-0 run, Thompson brought in three rebounds in just over three minutes, compared to none for the entire Minnesota team. Thompson would scrap together a couple of blocks and some more rebounds, helping the Buckeyes go up 24-9 early.

But as Thompson disappeared, the Gophers were able to claw back in the first half, and things got sloppy quick. In the second half, Thompson played much better defense, and while he didn't bring down any rebounds in the Buckeyes scoring tear in the second half, he did get points in the paint for the Buckeyes, which is always a plus. If Thompson can play the way he has in these recent wins, the Buckeyes are better. But they need him to be good.

2. They have to share the rock. Early, the Buckeyes were great. JaQuan Lyle had seven of the Buckeyes 12 first half assists, but many of those came early when the Buckeyes were playing like a well-oiled machine, and towards the end when they went back on another run to regain their lead. The Gopher pressure slowed things down for the Buckeyes, and forced them into turnovers. In those situations, the Buckeyes need to relax, get across the timeline, and set up the offense.

Early on in the Minnesota pressure, the Buckeyes would get across halfcourt, and immediately try to score a basket, and it often resulted in misses, or turnovers. This allowed Minnesota to trim their lead on two separate occasions in the first half. But when JaQuan Lyle went on his tear in the middle of the second half, it was truly spectacular to watch. It would be a lot to ask of him to carry the team like that every game, but that was awfully fun to watch.

3. Today was an important first step. The first Big Ten Conference game of the season had its ups and downs, but the Buckeyes survived it. They went on a great start, one that you perhaps couldn't ask for better. They gave up that lead, they lost the lead, and got it back time and again. But they powered through. This first conference win is a huge building block for the rest of the season.

We all know the Big Ten is no joke, and any win you can get in the conference is a good one. With a good game from JaQuan Lyle, as well as balanced scoring from Loving, Tate, and Bates-Diop, the Buckeyes should be moving forward with a decent amount of confidence, considering this one could have easily gotten out of hand for the Buckeyes before that late second half tear.