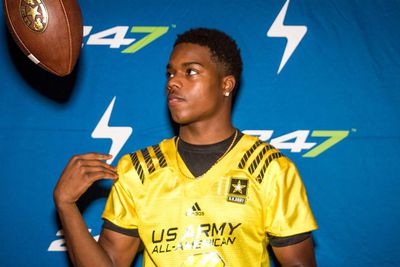 In an eventful weekend that saw the conclusion to the 2015 football season, Ohio State will now shift its focus to securing a top 2016 recruiting class.

The conclusion of the 2015 Buckeye football season was successful as Ohio State defeated Notre Dame in the Fiesta bowl, but that wasn't the only good news for the Buckeyes' football squad this weekend. With the commitment of 2016 prospect Jahsen Wint, the Buckeyes now have 18 current commits in the class, landing them as the second best class in the country per 247sports.

To go along with the addition of new Buckeye players also comes the turnover of losing current Ohio State players. With the success that Ohio State has had in just the four years of the Urban Meyer era, the Buckeyes are easily one of, if not the best school in the country for sending players to the NFL. With this comes the effects of early departures. Players such as Ezekiel Elliot, Joey Bosa, Cardale Jones, Darron Lee, and Tyvis Powell have all made it public that they will be forgoing their final seasons of eligibility and declaring for the NFL draft. When you have a program that is this successful you have to keep momentum and that is exactly where the Buckeyes will shift their focus: finishing a strong 2016 class and recruiting for the future of continued Buckeye success.


As first reported in an interview with The Detroit News, the wait is nearing an end as the country will know the destination for Donnie Corley this coming Saturday. He will announce his college decision at the U.S. Army All-American game in San Antonio, Texas. The recruiting saga for the Detroit, Michigan native has been an interesting one to say the least. At one time, Corley was thought to be a heavy Ohio State lean, only to see his recruiting process shift toward Michigan State.

Now, with his recent official visit to Ohio State on December 11, it seems that Ohio State may have the inside track once again to land the country's 19th-best receiver in the 2016 class. While Corley has said that he is still looking at Michigan, Michigan State, Tennessee, Notre Dame, and Ohio State, in all honesty, it is more of a two team race between Ohio State and Michigan State. Ohio State would love to land Michigan's second ranked prospect to join Austin Mack at the receiver position and we will know if this is to be this coming Saturday.


There has probably not been a prospect in the 2016 class that has expressed his love and excitement to be a Buckeye more than running back commit Antonio Williams of New London, North Carolina. Before his enrollment to Ohio State January 11, Williams was able to showcase his talents in the Offense-Defense All-American game in Florida on New Year's Day. In the contest, Williams showed the talent he will bring to Columbus as he carried the ball 15 times for over 100 yards and two touchdowns. With the early departure of Ezekiel Elliott and Williams enrolling early, look for him to be thrown right into the mix along with redshirt freshman Mike Weber to compete for carries in 2016.


Antonio Williams with a tremendous drive for a touchdown before the National Team ties the game! It's 34-34. https://t.co/xkKompwzoS


The current top-ranked safety in the 2017 class is none other than the Grand Prairie, Texas star Jeffrey Okudah. Earlier this summer, Okudah announced that the school leading in his recruitment process was Ohio State. However, fast forward to the present and Jeffrey claims to have no leader. While Chris Ash was his primary recruiter as the safeties coach at Ohio State, with his recent departure to lead the Rutgers program, that likely is the reason for the change at heart for Okudah and Ohio State.

However, per his Twitter account, over the weekend Jeffrey announced a top 10 list of schools and Ohio State certainly made the cut. With over a year to go before Jeffrey signs with his college decision, Ohio State is still in great position to reaffirm their relationship with the top safety now that newly hired Greg Schiano is in the mix. With an already loaded 2017 class, Ohio State will surely do what it takes to keep their momentum rolling by securing commitments from many of the country's top prospects.