Ohio State Pre-Spring Outlook: Linebackers
Brandon Zimmerman via our good friends at Buckeye Battle Cry
Visit their fantastic blog and read the full article (and so much more) here 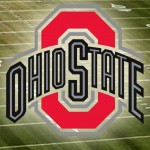 With the recruits signed, sealed, and almost delivered it is officially time to look forward to the 2016 football season. While the Buckeyes are already getting ready behind the scenes, things do not start to jump into another gear until the Buckeyes begin their spring practice on March 8th. Over the next couple of weeks, I will be taking a look at each positional group for the Buckeyes and discussing who might start and how the depth chart may shake up. Today, we get to look at the positional group which has grown the most under Meyer…the linebackers.

This year’s linebacker group is a testament to how well Urban Meyer and his coaches have recruited this position. After losing guys like Ryan Shazier, Darron Lee, and Joshua Perry over the last three years they still have eight very talented players who will be vying to lead the Silver Bullets for the 2016 season, none of which are seniors.

The leader of the linebacker room is junior Raekwon McMillan who is the lone returning starter to the position and one of three named team captains for the 2016 season. McMillan exploded onto the scene in 2014 as a true freshman when he played as the back- 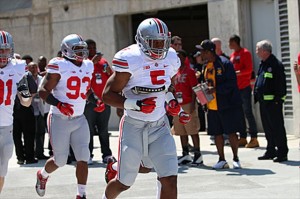 
up to Curtis Grant. While splitting time, McMillan had 54 tackles and 2.5 sacks. Going into the 2015 season, McMillan was expected to be the most dominant middle linebacker Ohio State has seen in a few years and he fulfilled those expectations. On the season, McMillan had 119 tackles, 4 tackles-for-loss, 1.5 sacks, and 1 fumble recovery.

With McMillan starting at middle linebacker, the weak-side and strong-side linebacker spots are up for grabs and two juniors look to slide into those spots after sitting behind future NFL linebackers. The first is Dante Booker who was a five-star recruit and former Ohio Mr. Football. He spent the 2015 season backing up Perry at the weak side linebacker spot where he racked up 22 tackles on the season.

The other junior vying for a starting job is former Glenville standout Chris Worley. Worley will be looking to take over the strong-side vacated when Lee left early for the NFL. As a former safety at Ohio State, Worley definitely has the athleticism the defensive staff looks for in this position. In 2015, Worley was the back-up to Lee where he racked up three tackles on the season.

Sophomore Jerome Baker came to Ohio State last season as a four-star recruit from Ohio. He was rated as the #4 linebacker in the country and known for his superior athleticism which helped him be one of the most dynamic two-way players in the nation. In his first 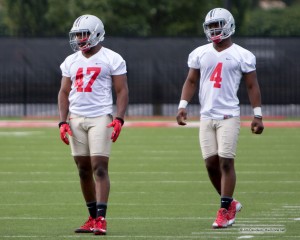 Hilliard and Baker hope to crash the juniors linebacking party.


season at Ohio State, Baker was one of only four true freshmen who made their way onto the field. For the season, Baker had 4 tackles on the season.

Redshirt freshman Justin Hilliard is going to be a name to watch this season. Hailing from Cincinnati, Hilliard was a five-star recruit and rated as the #1 linebacker in the country when he came out of high school. After redshirting last year, Hilliard will be stiff competition for one of the open linebacker positions. It will be interesting to see if he winds up at middle linebacker or outside linebacker.

Another redshirt freshman, Nick Conner will also work to see his way onto the field at the linebacker position. After having a breakout day during the 2015 spring game, where he had 7 tackles, an interception, and a forced fumble, Conner sat out last season behind McMillan and company. Like Hilliard, it will be interesting to see where he lines up at on the field. I ultimately think he will end up at middle linebacker. Of course McMillan will start but expect to hear Conner’s name a lot on special teams and when he spells McMillan.

One more highly-rated incoming freshman will be in the room in the form of Keandre Jones. Jones is a four-star recruit out of Maryland where he was initially committed to the home state Terrapins. He is rated as the 8th best outside linebacker by 247Sports. He is an early-enrollee which will help the staff decide on where he plays into the linebacker rotation. I think if Conner or Hilliard officially moves inside you will see Jones stay outside. If neither of those guys makes the transition inside, Jones will be moved to middle linebacker and be ready to take over for McMillan next year after he leaves.

Rounding out the true freshmen linebackers we have Tuf Borland and Malik Harrison. Borland is a three-star recruit out of Illinois. Rated as the 313th overall recruit, Borland will have a tough time cracking the depth chart barring a numerous significant injuries. Harrison is a three-star recruit from Columbus who is coming to Ohio State as a 6’4” 215 athlete without a true position. I expect the Buckeyes move him to linebacker with hopes of another Darron Lee happening.


It is hard to believe that we are only a few years removed from a fullback being moved to linebacker midseason due to him being the best option. Due to injuries and lack of progression, the linebacker group was a major liability for the Buckeyes but that is not the case anymore. Highly rated recruits like Hilliard are fighting tooth-and-nail to get onto the field. There is bound to be some drop-off this year which is understandable when you watch Perry and Lee get drafted early in the NFL draft but this year’s class will have an anchor in the middle. The presence of McMillan will help allow Baker and Booker get their feet under them.