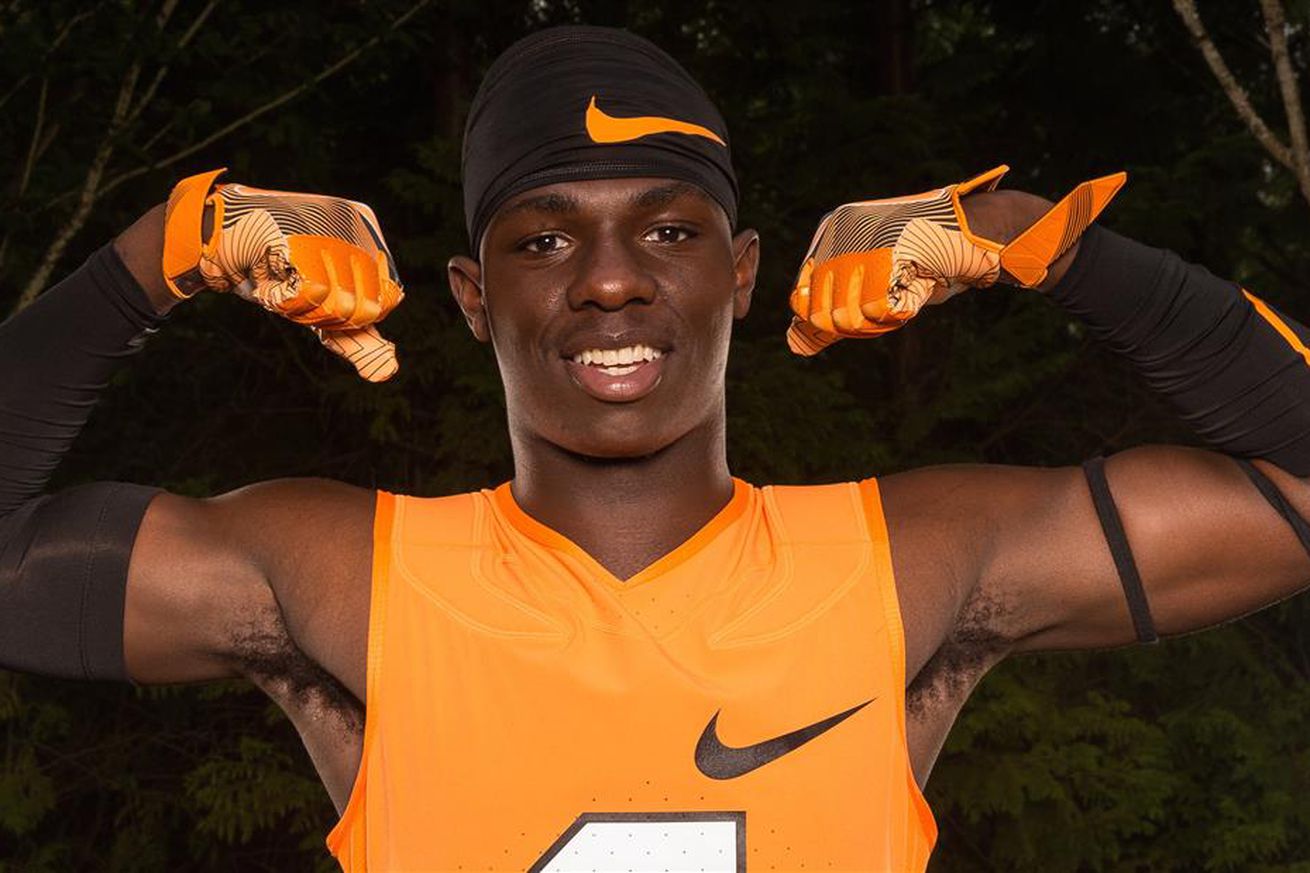 The 2016 season is fast approaching, but positive recruiting news is still heading to Columbus almost daily.

The Buckeyes have nearly completed their first full week of fall camp and updates have been a plenty. Urban Meyer and Ohio State have no shortage of talent and he has made that abundantly clear in several interviews with the media. Countless times, Meyer has mentioned that while there is youth, the talent on the team is what excites the staff the most. The reason the talent in Columbus is off of the charts is due to one thing: recruiting. The off the field efforts Ohio State's staff has done to bring top talent from all over the country is easily noticed by anyone, and that doesn't look like it will be changing any time soon.


To be one of the members of Ohio State's 2017 recruiting class, or to even receive the coveted offer, you almost have to be either a 5-star or 4-star prospect and considered to be atop of the list in the country in terms of recruiting rankings. So far, Ohio State has been able to assemble what will be an historical class when it's all said and done.

Yesterday, one of the recruits who owns an Ohio State offer made it known that the Buckeyes would be one of the teams that receive an official visit this coming fall. Markquese Bell, (Bridgeton, NJ / Bridgeton) said in an article with sportstalksc.com that Ohio State along with Michigan, Clemson, Maryland and Florida would all be schools not only receiving an official visit, but also to be in his final five schools considered to land his services.


#STRecruiting: Officials to tell the tale for Bell - DB Markquese Bell of Bridgeton, NJ is set for all five of ... https://t.co/lEhoARuNBf

— SCRN (@ScrnMarketing) August 10, 2016​
The talented New Jersey athlete is ranked as the sixth best athlete in the country and the third best player in the Garden State for the 2017 class. A 6-foot-3, 194-pound product, Bell has the ability to be a force on both sides of the ball with his size and speed. As of now, the 247sports crystal ball predictions have Bell leaning towards staying home and playing for Rutgers, but with the Scarlet Knights not even listed in his final five, it is anyone's race to win to land the talented 4-star.

With numbers tight for Ohio State's remaining spots in the 2017 class, Urban Meyer can be selective. If Bell wants in, it will have to be a love affair from both sides.


Huber Heights Wayne just North of Dayton, Ohio has been no stranger to Ohio State. The legendary quarterback Braxton Miller is just one of the former Warriors to dawn the Scarlet and Gray. Currently, Robert Landers is the most recent Warrior to make the short trek East on I-70 to play for the Buckeyes. The connection between Wayne and Ohio State has been strong and that's something both sides can easily see continuing in the future.

Current Wayne product L'Christian "Blue" Smith, a 6-foot-6, 205-pound monster on the football field is easily the most coveted Warrior Ohio State is after. With exceptional talent in both football and basketball, "Blue" has not made a final decision if it will be the gridiron or the hardwood for his sport of choice at the next level. While he will easily excel at either, many believe football will be the one to win it.

Yesterday, the attention surrounding L'Christian continued as he was given an incredible honor as being ranked as Rivals.com's top athlete in the 2018 class. Made publicly via his Twitter, "Blue" let it be known that his satisfaction has not been met as this ranking will only push the talented 4-star to continue to work on his craft and show why he's the nation's No.1 athlete.


I wanna thank GOD my Family and my Team for making me who I am today..The #1 athlete in the country ain't to bad...! pic.twitter.com/wI2mIq6DqJ

— Błå° (@bluesmith_) August 11, 2016​
Jay Minton, head coach of the Warriors, was another to mention the drive and attitude L'Christian sets forth proving that his head is in the right place during the recruiting process. Buckeye fans will hear this household name for the next two years to come and will hope to have him in what has started off to be another incredible recruiting class in 2018.


Via landoften.com's Jeremy Birmingham, Ohio State is leading for another top prospect. This time, class of 2018 linebacker Adrian Jackson (Denver, CO / Mullen) has mentioned that currently the Buckeyes are the leader in his recruitment. The nation's ninth best outside linebacker and Colorado's top prospect in 2018 went as far as to say that he is not considering any other schools for the time being.


2018 linebacker Adrian Jackson says the Buckeyes lead and he’s not looking at any other schools right now. https://t.co/SkItyPrmSe

— Jeremy Birmingham (@Birm) August 11, 2016​
With good news surrounding Ohio State's 2018 class lately, the Buckeyes will hope to secure another top national prospect in Jackson. Look for his recruitment to only escalate from here on.