Ohio State hockey lets No. 14 Penn State come back, loses 3-2 in overtime
Matt Torino via our friends at Land-Grant Holy Land
Visit their fantastic blog and read the full article (and so much more) here 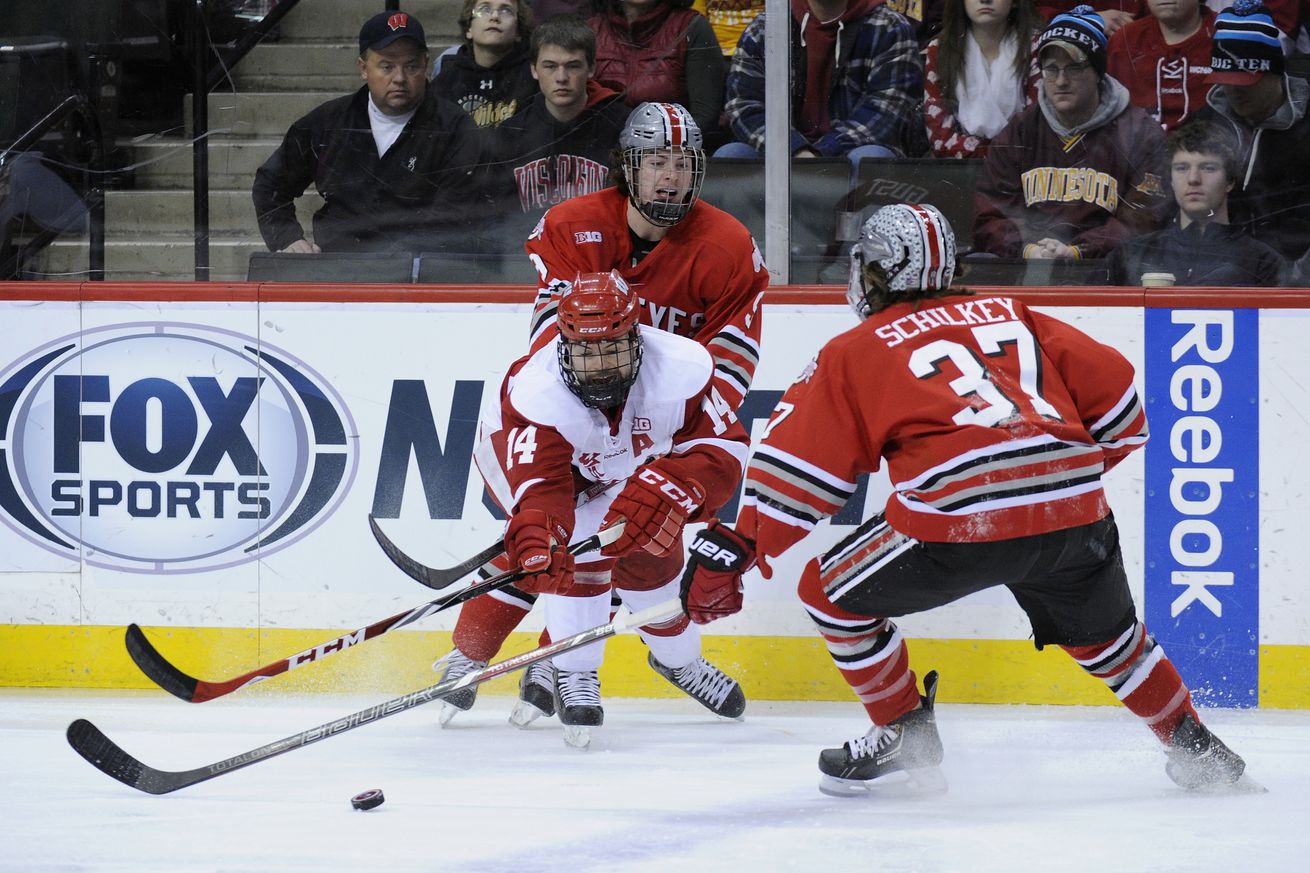 The Ohio State mens hockey team continued their bizarre stretch of conference play by blowing a late 2-1 lead to No. 14 Penn State, only to fall in overtime by a score of 3-2. There weren't any fireworks, like heads being bounced off the ice or goals being scored with 6.9 seconds left in regulation, but it was still a tightly contested contest that the Buckeyes came this close to winning.

Christian Frey was back between the pipes after missing last weekend's series versus No. 6 Michigan but even with their number one goaltender back dressed, Ohio State still couldn't hold off the Big Ten's newest hockey team.

Ohio State looked like they were going to get the first opportunity to go up in this one, with a powerplay starting with just over ten minutes remaining in the first period, but the Bucks would start the night's theme of not holding onto advantages when Penn State's Andrew Sturtz scored after Penn State's defensive pressure caused an OSU offensive zone turnover, leading to a 3-on-1 on the other way.

But just 55 seconds later, at 8:29, Josh Healey scored off a Craig Dalrymple rebound to knot it at one, with David Gust notching the secondary assist on the powerplay goal. It was Healey's fourth of the season. That tie would hold into intermission, with the Nittany Lions holding the 15-10 shots advantage, but Frey keeping the Bucks tied.

Ohio State would be held scoreless on their powerplay opportunities in the second (though just holding PSU off the board these times may have been a victory), but Nick Schilkey would score off the point, with assists going to Drew Brevig and Matt Weis, to make it 2-1 OSU at 18:37. The Buckeyes outshot Penn State 17-9 in the second and looked to be firmly in control of the game with that lead and advantage.

But the third wouldn't end kindly for Ohio State. Ohio State would have their opportunities in the third, but just couldn't find a way into the Penn State net. Penn State, however, found a hole in Frey, at 16:50, on a goal by Kevin Kerr. It was his first collegiate tally. Ohio State actually got a faceoff in Penn State's zone with 11.6 seconds left but couldn't recreate last weekend's magic against Michigan, so off to overtime we went.

It would not be kind to the Buckeyes. With Penn State creating pressure, even a blocked shot by Ohio State couldn't quell the PSU rush and Alec Marsh scored to send Penn State home with a 3-2 overtime victory.

Ohio State could have easily won this game and probably should have, but when you're playing a top 25 team, this is about as good an effort as you can expect. OSU has held up well in conference so far and could have easily swept Michigan last weekend, so you can't look down too badly on the effort, but an overtime loss with a lead blown this late still stings.

Game two of the weekend series at Value City Arena will be tomorrow night at 7pm.