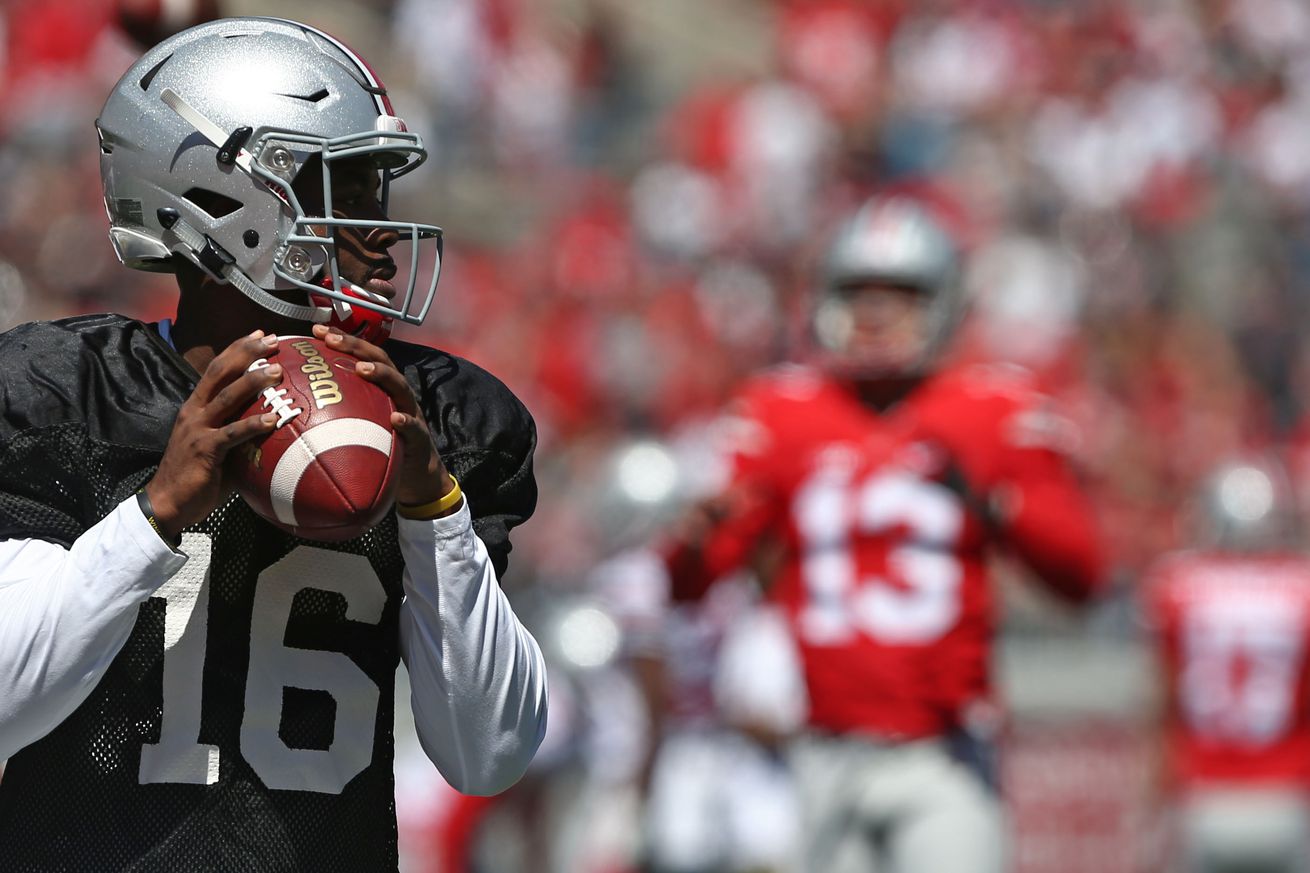 From a young team to a tough schedule, the Buckeyes will have to overcome serious challenges on their road to a conference championship.

"All could end well for Ohio State as far as their young and inexperienced players growing up faster than everyone expects, but there are just so many question marks on all sides of the ball, that the odds are clearly stacked against them winning the conference as they enter the 2016 season."


Despite the top-10 ranking in the first preseason AP Poll, the Ohio State Buckeyes will have to overcome numerous hurdles if they have any hope of winning the Big Ten, let alone the College Football Playoff.

For starters, as has been well documented, the youth and lack of experience on this year’s Ohio State team is almost unfathomable. Of 85 scholarship players, 44 have never even been able to play in a Division I game as they are either true or redshirt freshmen or, in the case of offensive lineman Malcolm Pridgeon, a JUCO transfer.

This lack of experience translates to another serious issue in lack of depth, which hinders the "next man up" mantra that has become almost expected on Meyer’s teams. And, with the likes of Braxton Miller and Ezekiel Elliott lost to the NFL, only J.T. Barrett remains to anchor the skill positions on an offense once filled with playmakers.

Moreover, it isn’t just players who have left Ohio State. The loss of Tom Herman to Houston following the 2014 season showed how drastic it can be to lose a coordinator, as the offense remained stagnant for so much of last season. This year, with Chris Ash having moved to Rutgers and Greg Schiano replacing him at defensive coordinator, there remains a lack of continuity from the coaching staff which could prove problematic.

With just three returning starters each on offense and defense, and a special teams unit which lost a key return man as well as its starting long snapper, the Buckeyes will have to grow up fast before facing a formidable schedule, which ranks in the top-15 in terms of difficulty by most ratings. And while most have the Oklahoma game circled, Bowling Green, which won its division in the MAC last year, and Tulsa, which lost by just three to Virginia Tech in the Independence Bowl, are no pushovers for an out of conference lineup.

The Big Ten slate gets no easier, with night games against Wisconsin and Penn State and a tough road schedule culminating in a tough test in East Lansing before the regular season finale in Columbus against Michigan.

"Ohio State inspires that same kind of pride. It is also a fertile recruiting ground, and would still have major pull for in-state players even if it was going through some lean years. The point is that you can’t rely on that talent alone."


The Ohio State football program is, at the moment, one of the most stable powerhouses in college athletics, having experienced great success over the last 15 years and, even when scandal threatened to rock the program, coming back quickly and seemingly stronger than ever. Still, there are lessons to be learned--especially for Ohio State--about how other perennial powers have managed trouble in four, key areas, which could prove to be valuable, including bad hiring, bad recruiting, NCAA-imposed sanctions and encroachment into the school’s territory.

For example, when Nick Saban came to Alabama in 2007, the program was not the Alabama we know today, having accrued a 67-54 record from 1997-2006 under Mike DuBose, Dennis Franchione and Mike Shula, respectively. While each coach managed one 10-win season during his tenure, the Crimson Tide won just one SEC championship in two overall title game appearances during the span, compared to winning four of five in the last nearly decade under Saban.

The main issue at Alabama boiled down to a series of poor hires which caused a severe downturn in a program that Paul "Bear" Bryant once brought to prominence. Much of the trouble surrounding the hiring seemed to stem from issues in administration, which prevented the best person from getting the job. Mike DuBose, for example, was hired largely on "acclamation" rather than his own skill level.

Under DuBose’s tenure, Alabama incurred NCAA sanctions which resulted in a two-year post-season ban as well as the loss of scholarships, which further hindered what his successors would be able to do with the program. Even so, given the prominence of the program, Alabama was still able to attract top talent from the area--something Ohio State would also likely experience in a similar situation. Unfortunately, recruiting and retaining talent in a decade of poor coaching decisions is not enough to win championships,

"Of course, you won’t hear such proclamations of greatness coming from the program, which has been quiet as a mouse. Just how Meyer likes it. But keep listening. Success has a way of raising its voice."


Even with news today that redshirt freshman receiver Torrance Gibson has been suspended for the 2016 season for an as of yet unidentified reason, the Buckeyes have been experiencing a very quiet offseason, especially compared to other programs across the country. In fact, besides running back Bri’onte Dunn’s dismissal from the team in July, there has been very little noise coming out of the Buckeye camp.

This time last year was a far different story, as Urban Meyer and the team were dealing with one-game suspensions for four key players, including defensive end Joey Bosa, H-backs Jalin Marshall and Dontre Wilson and wide receiver Corey Smith. Alongside the ever-raging quarterback battle between J.T. Barrett and Cardale Jones, which was not ultimately solved until the middle of the season, and the constant questions about how Braxton Miller would fit into the offensive team now that he was removed from the quarterback spot, and, of course, amidst the great expectations for what Ohio State would follow up with now that they were winners of the first-ever College Football Playoff, the Buckeyes were facing quite the din.

Still, Michigan in general and Jim Harbaugh in particular have led the offseason racket this year, causing commotions over everything from satellite camps to recruiting visits on social media to running around shirtless at practice. And speculation over the next College Football Playoff remains focused on Alabama, Clemson and Oklahoma, while the Big Ten powers sit in wait just on the outside of the projected first four in.

Even so, the Buckeyes are loaded with talent and have quietly earned a top-10 rating in the AP Poll, in prime position to strike when the opportunity arises. And while expectations are high for the young Ohio State team, Meyer has remained cautious and only hinted at the talent present in the locker room, limiting the noise created in Columbus as we head for Saturday.