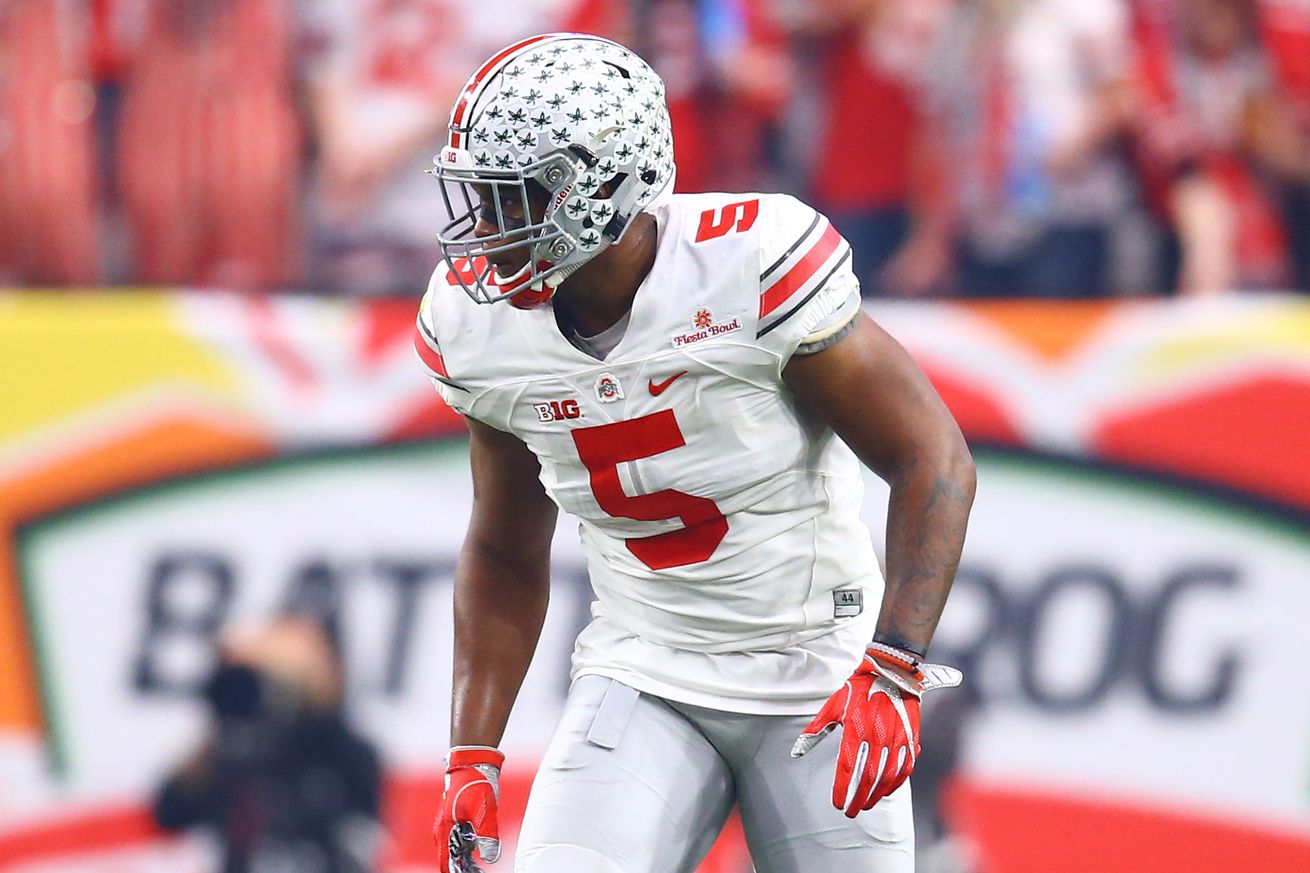 They still have a lot to prove, but several Buckeyes have a good shot at winning national awards come the end of the 2016 season.

Coming off a 12-1 season, capped with a traditional beat-down over Michigan, a Fiesta Bowl win over Notre Dame and a historic draft class, the Ohio State Buckeyes face a tough road ahead in terms of rebuilding what has proven to be one of the most talented teams in program history, having lost three-fourths of the starters on both sides of the ball.

However, talent in Columbus is still high, and the Buckeyes should not be counted out from major college football awards for the 2016 season. Those who have opted to return to the team either by their own volition or because they are not eligible for the draft still have a lot to prove before they can hoist their respective trophies, but Ohio State has more than a few team members whose names should appear on watchlists over the coming months as kickoff for the 2016 season approaches.

Ohio State players are not likely to be in the running for many of the skill position awards, such as the Doak Walker (outstanding running back), Biletnikoff (outstanding receiver) and Mackey (outstanding tight end) awards, but should be frontrunners for others, such as the Butkus (outstanding linebacker), Davey O’Brien (outstanding quarterback) and, of course, the Home Depot Award for coach of the year.


While two of the three Heisman finalists from 2015 are back in school this season, quarterback J.T. Barrett is in prime position to compete for college football’s most prestigious honor.

Christian McCaffrey, coming off a monster, 2,019-yard season at Stanford, could be hardpressed to repeat his historic performance, given that the Stanford offense lost its quarterback and four offensive linemen, including Outland Trophy winner Joshua Garnett, to graduation. Historically, only two running backs have had multiple 2,000 yard seasons since 1956 (Ron Dayne and Troy Davis). With so many missing pieces, McCaffrey might be better positioned for a senior Heisman campaign, should he choose to return to Stanford after next season.

Deshaun Watson, however, is the consensus front-runner for this year’s Heisman. With Clemson returning the majority of its offensive firepower, Watson is poised for a repeat performance of last season. However, having lost the majority of its key pieces on defense, Clemson will have a tough road ahead to make it back to the College Football Playoff, which could prove to be a determining factor in Watson’s Heisman campaign.

The question for Barrett is how he will manage to maintain a high level of performance without running back Ezekiel Elliott to balance the passing attack, and without standout receiver Michael Thomas as his downfield threat. Running backs Mike Weber and Bri’onte Dunn, as well as receivers Noah Brown and Corey Smith, will need to step up to provide the assist.

Barrett is poised for a Heisman run this season--his first where he is the known starter since the spring, and where he has been fully-healthy to compete in drills. He has already proven his intangible leadership skills, having been elected a captain as a sophomore on the bench, and earned back his starting job last season by demonstrating a top performance. While last season may have been a little rough, Barrett maintained over a 60 percent completion percentage and ended the season with 11 touchdowns each on the ground and through the air. While Barrett is currently an outside shot, his Heisman hopes ride on the success of Ohio State as a whole. If the Buckeyes make the College Football Playoff, you can bet that Barrett will have a seat in New York.

Beyond the Heisman, Barrett is also a logical candidate for the Walter Camp and Maxwell awards, which honor outstanding players, and the Davey O’Brien Award for the nation’s best quarterback.


Perhaps the clearest-cut contender for national awards this coming season for the Buckeyes is junior linebacker Raekwon McMillan. After playing in all fifteen games as a freshman during the Buckeyes’ national championship season, McMillon went on to record 57 solo tackles during his sophomore campaign. Already named a captain for the 2016 season, all eyes are on the former five-star recruit to lead the team on the defensive side of the ball. Barring injury, McMillan should have competitive statistics in 2016 by virtue of the fact that he is Ohio State’s middle linebacker. At the end of the season, he will likely be at worst statistically on par with other candidates, and his reputation will make him a finalist. Any defining performances beyond that will earn him the award.


While this award is nearly impossible to forecast given that it seems to inevitably go to either the coach of the best team in the country or the coach whose team far exceeded expectations, no list of candidates would be complete without Urban Meyer’s name. Ohio State has to overcome the loss of 16 starters, including the likes of Ezekiel Elliott, Joey Bosa, Taylor Decker, Eli Apple and Darron Lee, all of whom went in the first round of this year’s NFL Draft.

If Meyer is able to make the College Football Playoff given this severe loss of talent, he will will be able to check both boxes of being one of the nation’s best team and overcoming improbable odds. Meyer also has the opportunity to go head-to-head against Bob Stoops and Jim Harbaugh--two coaches who are also undoubtedly on the short list for this award--which will help to set him apart. Like Barrett, Meyer’s chances of winning this award are predicated on the success of the Buckeyes as a whole.


With Pat Elflein moving positions prior to the 2016 season, he might not be as effective at center as he was at right guard last year. Combined with the fact that the leading candidates for these awards are often identified prior to the season, Elflein might not even be in the running since voters may not realize he has switched positions. The center position is also not statistically based compared to the many stats available on skill position and defensive players, so nothing will jump out on paper about his performance. Consequently, award winners often win based on reputation over the course of their careers rather than on one particularly great season. Consider the fact that all three finalists last year were seniors. However, this dynamic could work in Elflein’s favor, as the field is now wide open.


With a move to center, Pat Elflein will not be eligible for this award. However, as one of two returning lineman at Ohio State, left guard Billy Price could have an outside shot at the Outland. A two-year starter, Price has not gotten the recognition of the likes of Taylor Decker or Pat Elflein, though he was named a freshman All-American during his first season. Widely praised as one of the strongest guys on the team, Price could be an influencer at the guard position in 2016.


Despite two returning finalists from last season in Colorado State’s Hayden Hunter and San Jose State’s Michael Carrizosa, Ohio State’s resident Australian rugby punter Cameron Johnston could easily be in the mix come the fall. A three-year starter for the Buckeyes, Johnston has averaged nearly 45 yards per punt, and has been famously reliable for flipping field position, downing an inordinate amount of punts inside the opponent’s 20. While he will not be the favorite heading into the 2016 season, Johnston already has the credibility to be considered. He was one of 10 semifinalists last year, and was named by the Ray Guy Award Player of the Week following his performance against Illinois.


Reigning winner Desmond King from Iowa is the clear favorite for next year’s award, but Ohio State’s Gareon Conley should not be discounted from the discussion. Having spent last season playing opposite Eli Apple, Conley was often looked at as the "weak side" corner, but the former three-star recruit improved greatly over the course of the season, and could be a surprise candidate for this year’s Thorpe Award.


While the Lombardi Award has tended to favor defensive linemen over offensive linemen as of late, Pat Elflein could have a shot with an outstanding season at center. If he can prove his versatility, he may be able to show that he truly is the best all-around lineman in college football.


Though entering his first year as a full-time starter, sophomore defensive end Sam Hubbard has already garnered significant experience at the position, having filled in for Joey Bosa on several occasions last season. Hubbard could certainly be considered for this award, but it would require a Bosa-like impact from the outset.