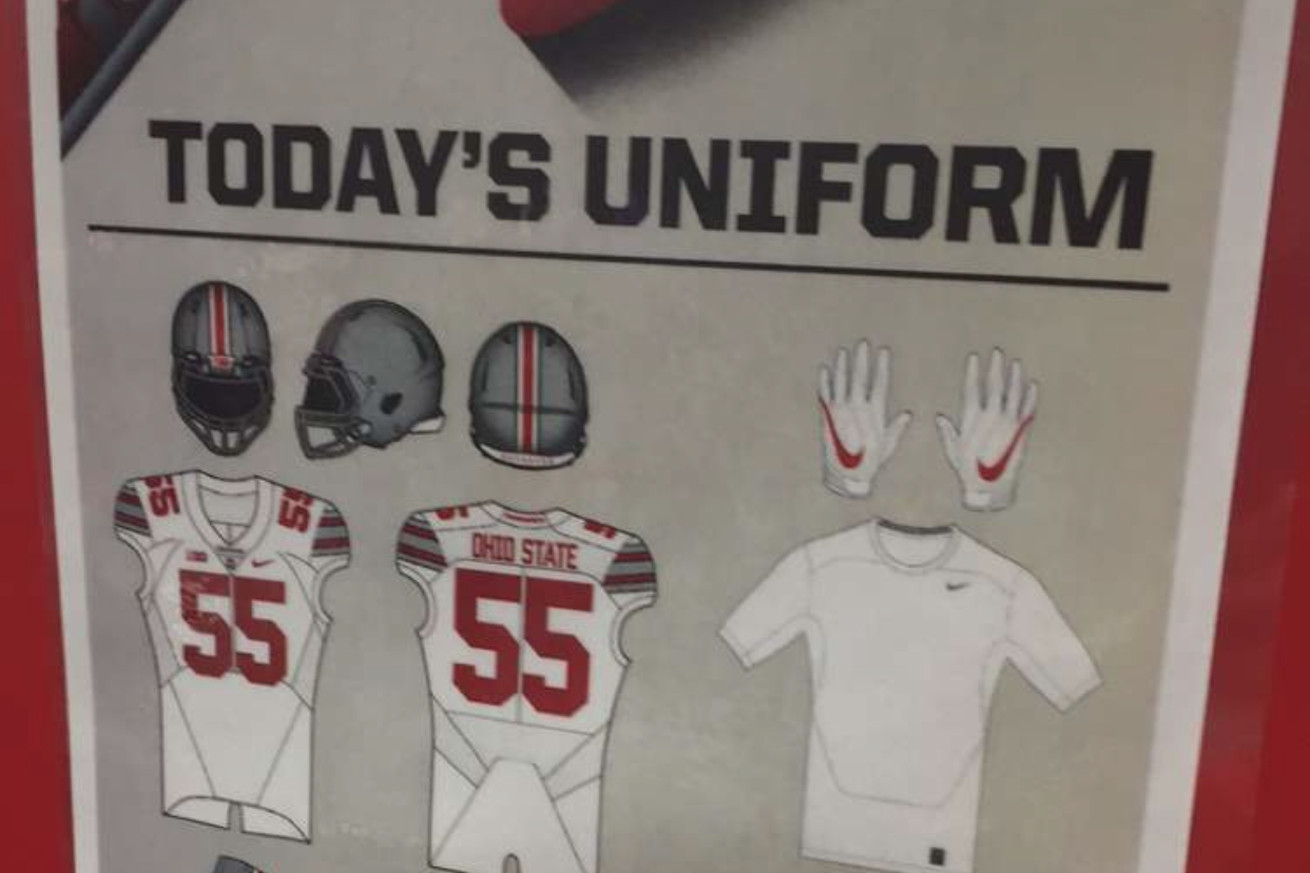 As seen in last year’s victory over Michigan. 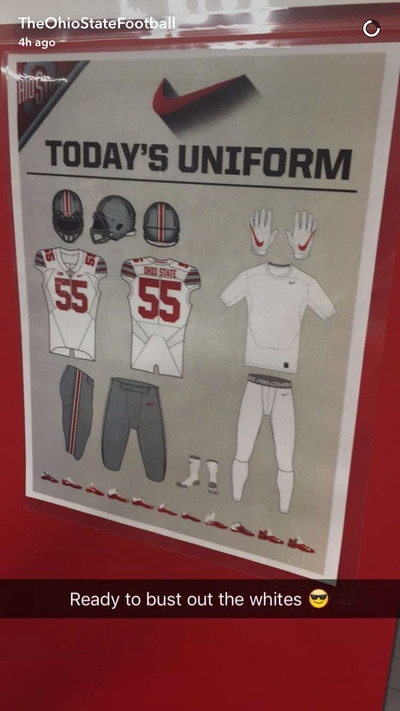 
If you don’t follow ohiostate-fb on Snapchat, you may have missed the football team letting an aesthetic rabbit out of the hat.

Though they won’t have any meaningful impact on the outcome of the game itself, it can’t hurt to look good, win or lose. And besides, that’s not the only Alabama game similarity we heard today:


@OSUCoachMeyer on Oklahoma: The size of their defensive line. They're gigantic. Very similar to Alabama. Makes it difficult to run...

— Ohio State Buckeyes (@OhioStAthletics) September 12, 2016​
“As the University of Tulsa athletic department will receive a payment of $1.03 million, Saturday’s football game at Ohio State was the most lucrative road contest in program history.”


Despite a 48-3 loss to the Ohio State Buckeyes Saturday, the Tulsa Golden Hurricane are not going home entirely empty handed. In fact, the athletic department will receive more than $1 million for the matchup, which makes it Tulsa’s most profitable road game ever. Last season, Tulsa received $400,000 for a three-game series with Oklahoma, though one of the games was played at home in 2014, leading to the lower payout. In 2018, however, Tulsa is expected to receive a $1.1 million payment for playing at Texas.

Such “guarantee” games have brought millions to schools with smaller budgets. Just last week, Alabama paid $1.3 million to play Western Kentucky in Tuscaloosa. While the on-field play might cause criticism of the larger school for having scheduled a “cupcake,” the off-field impact is crucial for funding smaller schools whose revenue can barely cover expenses. Last year, for instance, Ohio State made more than $167 million in revenue, receiving no subsidy from the school for its athletic department. However, teams in the American Athletic Conference--home of the likes of Tulsa and Cincinnati--earn more in the range of $40-$50 million which, in many cases, does not cover athletic department expenses.

Still, paying a high price does not assure a win for larger schools with bigger budgets. Michigan shelled out $400,000 in their loss to Appalachian State in 2007 (though they upped the amount to $1 million in 2014 when the Wolverines won 52-14). And FCS North Dakota State is a formidable foe, having defeated Colorado State, Minnesota, Kansas, Kansas State and Iowa State in recent years, receiving a significant payout from each of its FBS opponents.

“Many people think as ticket prices go up, more and more fans will stay home and watch games on their increasingly high-def televisions and on their increasingly comfortable couches. Many also see a day when we no longer bundle TV packages, and channels, or even games, are just available a la carte.”


While the idea of watching football games in a pay-per-view format is in many ways quite appealing, the reality is that, in many cases, watching from home is actually more expensive than attending the game. Such was the case for Oklahoma’s week two win over Louisiana Monroe Saturday, where watching the game live cost a whopping $49.95 (don’t worry--next week’s matchup against Ohio State will be nationally televised on FOX). While there are several options, from satellite streaming to cable, the median price was higher in this case than the cost of some tickets to the game itself, many of which were available for resale for under $40. Streaming directly through Oklahoma athletics was $59.99, for example, though users could purchase an annual package for $109.99. The replays of both of Oklahoma’s games are available in their entirety on YouTube currently.

Of course, premiere events can cost much more on pay-per-view. The epic boxing match between Floyd Mayweather, Jr, and Manny Pacquiao, for example, cost $99 to watch. But there have been steady improvements. The NBA announced last summer that viewers could purchase individual games that were not nationally televised for $6.99 each.

While this format is not new to Oklahoma fans, who also had to pony up for last year’s home opener against Akron, the idea of pay-per-view is foreign to the Big Ten, and begs the question of what price Ohio State fans would be willing to pay to see the Buckeyes play — especially in a non-conference matchup in week two.

“You just don’t know until you know...But I liked our players. And I’ve done this long enough, I can see a talented player when we have one, and we have a bunch of them.”


Youth does not necessarily mean a lack of talent, according to Ohio State head coach Urban Meyer, but it does help to have two wins under the belt of the young Buckeyes team as they prepare for their primetime matchup against No. 14 Oklahoma Saturday. And while 30 players saw the college field for the first time against Bowling Green, a few in particular have already set themselves apart as potential stars who could make a big impact against the Sooners.

For starters, sophomore safety Malik Hooker has already turned heads with three interceptions -- including a pick-six -- in his first two games. Coming into a secondary which lost the likes of Eli Apple, Vonn Bell and Tyvis Powell to the NFL, not to mention its coach, Chris Ash, who departed for Rutgers, it seemed that cornerback Gareon Conley would be left to fend for himself in the defensive backfield. But Hooker has stepped up in the middle and helped to anchor the young unit, which will be essential against Baker Mayfield and Oklahoma’s passing attack. Also on defense, redshirt junior linebacker Chris Worley has seemed to have been a healthy replacement for the departed Darron Lee, and defensive end Nick Bosa has already had a sack on the season.

On offense, after spending his redshirt season under now-Cowboy Ezekiel Elliott, running back Mike Weber has shown early signs that he could be the next star in the Ohio State backfield, amassing 228 yards on 36 carries for one touchdown. Finally, after waiting an entire season following a broken leg, wide receiver Noah Brown has his shot at being a standout downfield, averaging 15.5 yards per reception with a touchdown through two games.