Ohio State’s interior line key to containing Oklahoma
E.L. Speyer via our friends at Land-Grant Holy Land
Visit their fantastic blog and read the full article (and so much more) here 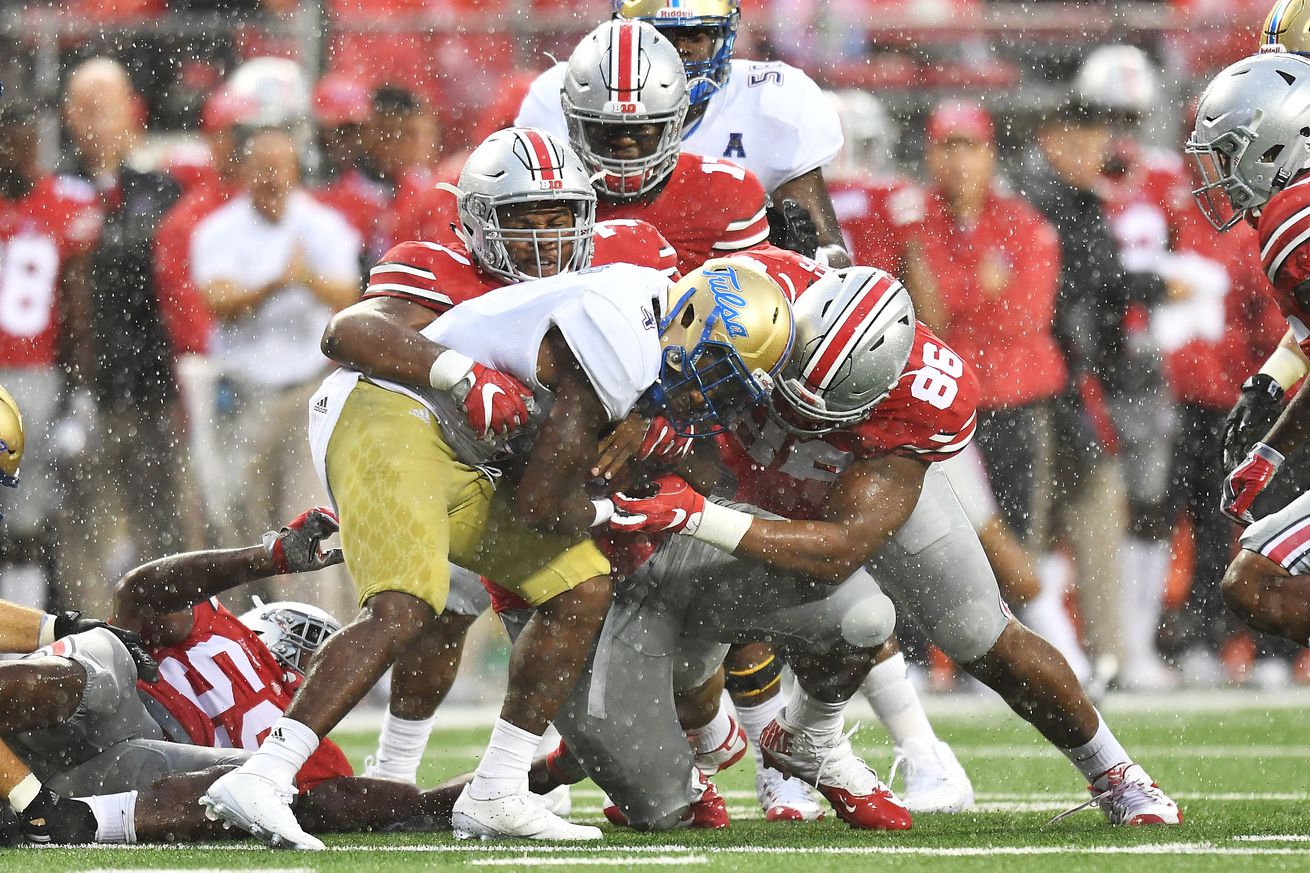 Will past recruiting misses come back to haunt the Buckeyes?

The season is young, but it’s hard not to be impressed with Ohio State’s defense so far. Sure, the competition hasn’t been stiff through two games. Tulsa and Bowling Green aren’t world beaters.

Still, both programs run up-tempo spread offenses and should rank toward the top of their respective conferences in total offense this season. Yet neither scored a touchdown in their visits to the Horseshoe while the Buckeyes’ defense scored three times.

That’s what happens when you’re able to replace first round draft picks with four and five-star recruits at a place like Ohio State.

The Buckeyes will likely never operate at a talent deficit this season, but there are a handful of teams capable of stressing Ohio State’s defense with athletes, and not just scheme. Oklahoma is one of those programs, and the Sooners will be an early indicator into just how good the Silver Bullets can be this season.

On paper, not even the prestigious Sooners can match the talent that Urban Meyer has collected in Columbus. Oklahoma has averaged the nation’s 15th best recruiting class over the last four cycles, per the 247sports recruiting composite. Meyer has reeled in three top-five classes during that time.

That is not to discredit Bob Stoops and the boys from Norman. Oklahoma returned 14 starters from a squad that reached the College Football Playoff a year ago, and boasts one of the most dangerous backfields in the sport, led by quarterback Baker Mayfield.

Oftentimes the Sooners’ celebrated signal caller is flanked by a pair of devastating running backs in Samaje Perine and Joe Mixon. Perine once rushed for 427 yards in one game, an NCAA record. Mixon might be even more explosive.

And there lies the complication for Schiano as he prepares his unit for Saturday’s showdown; Oklahoma’s strongest personnel group is designed to attack Ohio State’s weakest link.

While it’s true that few coaches can rival Meyer’s recruiting prowess, Ohio State’s ability to sign elite defensive tackles has resembled that of a middling Midwest program in recent years. The Buckeyes have made a habit of chasing the big-name, big-bodied behemoths from southern states, only to be left at the alter come national signing day.

As a result, Meyer and his staff have often fallen back on their second, third, or even fourth option at defensive tackle. Take the 2015 recruiting cycle for an example, when the Buckeyes struck out swinging pursuing a pair of five-stars, and then settled on Robert Landers and Davon Hamilton in response. Landers was ranked as the 476th best recruit in his class. Landers was unranked. Both will see significant playing time as redshirt freshmen this Saturday.

Recruiting rankings aren’t everything. Some of Ohio State’s best players during Meyer’s tenure were once unheralded recruits. But it takes vision to see a Big Ten star where others see a MAC-level talent. And from there a tremendous level of coaching is required to make that vision a reality.

There might not be a better position coach in the country to carry out that mission than Larry Johnson. Before coming to Columbus in 2014, Johnson was Penn State’s defensive line coach for 14 years. During that time he developed five first-team All Americans.

As the game settled down so did the OSU interior line while showing signs of growth. A notable play came in the second quarter, when Landers demolished a Tulsa misdirection run play, flashing the ability that Johnson likely envisioned when he recruited the young wrecking ball of a man.


“He’s so low to the ground it’s hard to block him,” said linebacker Raekwon McMillan of Landers. “He has great get off on the ball.”

It’s pivotal that Landers and his counterparts get off blocks early and often against Oklahoma so that McMillan and the linebackers can attack Perine and Mixon behind the chains. The Sooners utilize several of the same trap concepts that Tulsa deployed last weekend, and run much of their play-action off of that look.

Mayfield garners more fanfare than any other Sooner, and rightfully so. The former Heisman finalist plays with more creativity than any quarterback in the country, and has the unique ability to see a 40-yard touchdown where most see a five-yard loss.

That ability is amplified when defenses face run-pass conflicts on second or third-and-short. When Oklahoma’s running game is stifled on early downs, however, it forces Mayfield to become a more traditional pocket passer, mitigating his threat.

Some fans have questioned whether this game with Oklahoma is consequential to any of Ohio State’s goals. As a non-conference opponent, the Sooners have no impact on the Buckeyes’ bid for a Big Ten title. And with the conference looking as strong as ever, OSU could probably survive a loss here, win out and make the playoff.

But what if the Buckeyes fall because the interior line cannot contain a dynamic rushing attack? The days of playing Bowling Green and Tulsa are over. The likes of Wisconsin, Michigan State and Michigan are peering around the corner, with powerful run games of their own in tow. Ohio State’s ability to stifle Mixon and Perine could foreshadow what’s to come in conference play, for better or worse.

Like Schiano said, it’s time for big boy football. The Buckeyes will need their biggest boys to prove their worth on Saturday.