Making The List: Peter “Pete” George
jcollingsworth via our good friends at Buckeye Battle Cry
Visit their fantastic blog and read the full article (and so much more) here 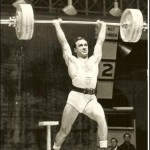 In our pursuit to bring to focus some of the great past names of athletics from The Ohio State University in Making the List, often names are missed – even intended to bring out at another time … but the grand tool of forgetfulness arrives and good intent vanishes as it arrives to another worthy name.

This week’s choice is one of those names.

Peter George was a weightlifter born in Akron, Ohio back when the Market crashed – 1929. He had always been a strong kid. At the tender age of 15 he would be the first of that age to clean and jerk 300 lbs. He would also be the youngest senior state (Ohio) champion at the tender age of 14 & ½. By the time he was 17 he won the World Championship.

Weightlifting simply never caught on as a varsity sport in college, which includes our lovely corner of Heaven – The Ohio State University. Club sports though have a tendency to gather a following too though. Pete began to participate through intramurals and the weightlifting club while in Columbus. As a Dental Student in 1952-56 Pete managed to make a notable name for himself in this highly competitive, yet unnoticed sport.
Pete would go on to compete further into world competition before and after arriving in Columbus by making Team USA and representing America in the 1948 Summer Olympics in London in the Men’s middleweight where he’d win silver. In 1952’s Summer Olympics in Helsinki he would win Gold – also in the Men’s middleweight. And in 1956 in Melbourne – Men’s middleweight – he would take home the silver again.

Pete’s world achievements did not yield in those frames of time. He won five World Championships in 1947, 1951, 1953, 1954, and 1955. He placed second at the World Championships in 1949, and 1950 – this made for a total of 10 medals in World and Olympic competition. He would also be the proud owner of four world records, three of which were in the clean and jerk, and one in the total.

Pete would graduate from The Ohio State University and move to Hawaii where he would have a successful dental practice for many years.

Peter George is a member of a sport that we often recognize but hardly think of. Weightlifting is a good and clean sport. I recall watching Olympic events back when I was a child and being tremendously impressed. It even made me use some of my paper route money to buy weights, along with a bench – that, of course, ended up being a perfect clothes hanger. It is a tough sport and dedication is completely essential – as it is in anything worth its value.

Pete George is more than deserving to be recognized as a Great Buckeye. In the time-frame allotted his prime – in a sport that we all watch in awe, he was absolutely dominant. After these years we would learn of a humble man from Ohio now in Hawaii with a huge list of patients – all wanting the Gentle Giant to fix their dental issues. I am pleased that I came across Pete George’s name and accomplishments. I am even more pleased to add him to our wall of the greats of Making the List.