Making The List: Eddie George
jcollingsworth via our good friends at Buckeye Battle Cry
Visit their fantastic blog and read the full article (and so much more) here 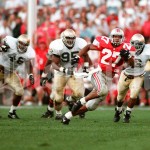 The Football Season is finally upon us. This coming weekend (Saturday the 3rd) our Buckeyes begin the 2016 Season with an opening game against the Bowling Green Falcons. The excitement is in the air. For us Scarlet and Gray junkies – this is a tremendous time of the year.

With this precious reminder it is only appropriate that this week’s Making The List goes to a Football player. I cannot think of anyone more worthy than the great Eddie George. In truth, I should have chosen him last year when we began this acknowledgement of Buckeye Greatness. But things happen for a reason. And, now as I review a few things, this week appears to be the perfect match to include Mr. George.

In 1992 Eddie came to The Ohio State University via way of Fork Union (VA) Military Academy where he was a national focus. In the Buckeyes first game of the season, versus Louisville, the end score would be 20-19 – OSU winning. Eddie in that game would get only a quick look, one attempt for three yards. The following week, September 12, the Buckeyes met up with the Falcons of Bowling Green. The final would be a closer than imagined 17-6 Buckeyes victory.

What made this game appropriate for Eddie being announced as our choice for Making The List is that his first TD ever as a Buckeye came in the 2nd Quarter against the Falcons from one-yard out. He would finish this game with seven attempts totaling 38 yards.

In 1992, his freshmen year, Eddie would quickly become a contributor. The week following his first TD in Columbus as a Buckeye against Bowling Green he would stand noticed on the 19th of September in the Carrier Dome against Syracuse. The Buckeyes would win 35-12. George would only have 9 attempts for a total of 23-yards. But he would score three TD’s. This began what would be a tremendous career in Columbus for Eddie George.

By the time George was a senior in the 1995 season, George rushed for a school record 1,927 yards and 24 touchdowns, an average of 148.23 yards per game, while also catching 44 passes for 399 yards and another score (George only caught 16 passes in his first three seasons). One of his best performances of the year was in a 45-26 win over Notre Dame, where he rushed for 207 yards, his third 200-yard game of the season. He also rushed for a school-record 314 yards and scored 3 touchdowns in OSU’s victory over Illinois.

George would end his career in Columbus as the third all-time rushing leader with 3,768 yards; at the time though he was second. Ezekiel has since passed him to be # two and, of course, Archie’s # one position is quite secure. George is also second on the all-time list for most TD’s in a season with 24. He is third in career TD’s with 44. And, lest we forget, he is third in career 100-yard games while playing for the Buckeyes, with 20.

In 1995 along with the Heisman Trophy, Eddie would receive the Walter Camp Award, the Chic Harley Award, the Doak Walker Award, and the Jim Brown award. He would be a Consensus All-American. His #27 would also eventually be retired. 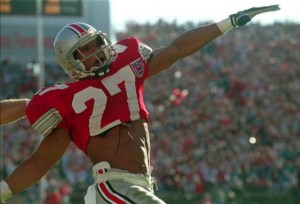 George would go on to be a first-round draft selection (14th overall pick) of the Houston Oilers (eventually becoming the Tennessee Titans) in the 1996 NFL Draft. George won the NFL Rookie of the Year award in 1996, and was the Oilers/Titans’ starting tailback through 2003, never missing a start. He made the Pro Bowl four consecutive years (1997–2000), and assisted the Titans to a championship appearance in Super Bowl XXXIV, where they lost to the St. Louis Rams 23-16. George gained 391 combined rushing and receiving yards in the Titans’ three playoff games that year and went on to rush for 95 yards, catch two passes for 35 yards, and score two touchdowns in the Super Bowl.

George is only the second NFL running back to rush for 10,000 yards while never missing a start, joining Jim Brown. Only Walter Payton (170) started more consecutive regular-season games than George’s 130.
His NFL career totals include 10,441 rushing yards, 268 receptions, 2,227 receiving yards, and 78 touchdowns (68 rushing and ten receiving).

On May 19, 2011, it was announced that George would be inducted into the College Football Hall of Fame.

Eddie George is a Buckeye legend. Plain and simple. All of us who recall his days in Columbus were completely thrilled week in and week out. Eddie George falls into the category that everyone remembers in a running back – big and strong. And not only big and strong, but productive beyond imagination. It is time that I bring Eddie George within the house of our growing community of Making The List. He was everything that defines a great Buckeye in a single word: Dominant

P.S. Did I mention Broadway is looming in Eddie’s future?