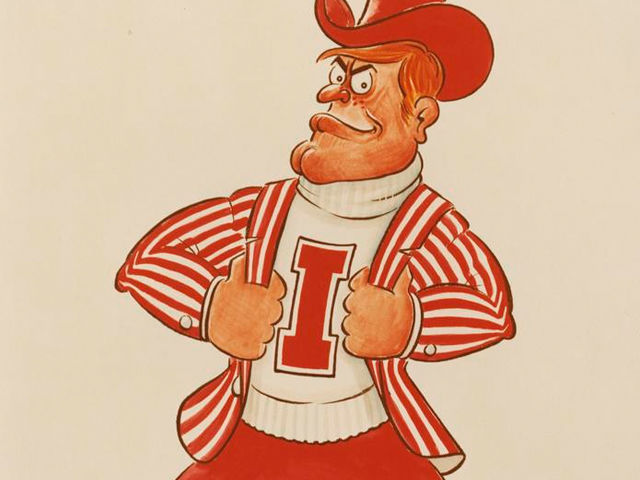 1. Indiana University is located in Bloomington, about an hour southwest of Indianapolis. IU is the state's flagship public university. The school's motto is Lux et Veritas, which translates to: "Light and Truth".

2. Indiana's colors are crimson and cream and its mascot is the Hoosier. No one knows exactly what a Hoosier is, other than a term for a resident of Indiana. Some say that Hoosier comes from an old Indian word, hoosa, which apparently meant "maize". Whatever the origin of the obscure word, Hoosier now apparently means: "friendliness, neighborliness, an idyllic contentment with Indiana landscape and life." At least that's according to the Indiana Historical Society, which is probably not the most objective source for such information.

6. Indiana has finished ranked in the final polls only seven times in their history, with their highest ranking being 4th (AP in 1945; AP in 1967). The last time that the Hoosiers finished a season ranked was 2020, when they were 12th in the AP poll and 13th in the coaches poll.

7. Indiana has been to thirteen bowl games, compiling a record of 3-10 in those contests. Indiana's only major bowl appearance was the 1968 Rose Bowl, where they lost to national champion Southern Cal by the score of 14-3. Indiana's most recent bowl appearance was in the 2020 Outback Bowl, a 26-20 loss to Ole Miss.

9. Just two years after Thompson graduated, the Hoosiers produced their second unanimous All American, running back Vaughn Dunbar. In 1991, Dunbar had 364 carries for 1,805 yards (4.96 average) and 12 touchdowns.

10. Indiana's third (and to date last) unanimous All American was yet another running back, Tevin Coleman. In 2014, Coleman rushed 270 times for 2,036 yards (7.54 average) and 15 touchdowns, including a career-long 90-yard touchdown run against Ohio State. Coleman's 90-yard burst was the fourth-longest play from scrimmage ever allowed by Ohio State (tied with two others).

12. An Indiana great who did not earn All American recognition was quarterback Antwaan Randle El. For his Hoosier career, Randle El had 11,364 total yards (7,469 passing; 3,895 rushing) and 87 total touchdowns (42 passing; 44 rushing; 1 receiving). Randle El was named the Big Ten Freshman of the Year in 1998 and the Big Ten Offensive Player of the Year in 2001. The following spring he was selected in the second round of the NFL draft by the Pittsburgh Steelers, where he became an All Pro and Super Bowl champion. For his NFL career, Randle El had 9,221 all-purpose yards and 27 total touchdowns.

13. In 1949, Indiana's George Taliaferro became the first black player drafted by the NFL (Chicago Bears, 13th round, 129th selection). At IU, Taliaferro played quarterback, halfback, defensive back, and punter. In 1948, Taliaferro led the Hoosiers in both rushing and passing, and he was named a first team All American. In 1981, Taliaferro was elected to the College Football Hall of Fame.

14. Pete Pihos played end and fullback for the Hoosiers during the 1940s. Pihos was named a first-team All American in both 1943 and 1945, and during his time in Bloomington he set several team records in receptions, touchdowns, and scoring. Pihos subsequently played nine seasons for the Philadelphia Eagles, where he won two NFL championships and earned All Pro honors six times. Pihos is a member of both the College and Pro Football Halls of Fame.

18. Indiana last beat Ohio State in 1988. Led by their great running back Anthony Thompson, who had 32 carries for 190 yards and 4 touchdowns, the Hoosiers trounced the Buckeyes by the score of 41-7. That victory gave the Hoosiers a brief two-game winning streak in the series, as they had also beaten the Buckeyes in 1987 by the score of 31-10. The only other winning streak by the Hoosiers in the series was four games from 1903 to 1913.

20. Indiana last tied Ohio State in 1990, by a score of 27-27. Since that tie, Ohio State has beaten Indiana 27 times in a row (including the vacated game in 2010), the longest current winning streak in a series between two FBS teams.

21. In the 2011 contest, Ohio State quarterback Braxton Miller had an 81-yard touchdown run, tied for seventh-longest in Buckeye history. The Buckeyes had a great day running the ball as Daniel Herron (141 yards), Carlos Hyde (105 yards), and Miller (105 yards) each eclipsed the 100-yard mark. The passing game wasn't so hot, as freshman Miller completed just 5 of 11 passes for 55 yards, no touchdowns, and one interception. Ohio State prevailed, 34-20.

22. Urban Meyer's first game against Indiana in 2012 was a wild affair. Each team had several big plays (see below), and a 46-yard touchdown pass from Braxton Miller to Devin Smith gave Ohio State a nearly insurmountable 18-point lead (52-34) with just 6:47 left on the clock. Then the Hoosiers really got down to business. They went on a 10-play, 74-yard touchdown drive (converting two third downs and one fourth down) to cut the lead to 52-41 with 1:40 remaining. Indiana recovered the ensuing onside kick and went 48 yards in five plays, using up only 35 seconds in the process. The Hoosiers successfully executed the 2-point conversion to cut the Buckeye lead to 52-49. Ohio State finally secured victory when Philly Brown recovered the second onside kick.

23. The 2013 contest was a typical blowout win for Ohio State (42-14), but the Hoosiers gave the Buckeyes a real scare in 2014. Ohio State entered the game ranked #6 in the country with a record of 10-1, while Indiana (3-8 record) was slogging through yet another losing season. After running out to a quick 14-0 lead, the Buckeyes went into cruise control and by midway through the 3rd quarter found themselves down 20-14 after Indiana's Tevin Coleman busted off a 90-yard touchdown run. Ohio State answered the wake-up call with four straight touchdowns from Jalin Marshall, including a 54-yard reception and a 54-yard punt return, to take a 42-20 lead. Coleman added a 52-yard touchdown run in garbage time to finish with 228 yards rushing and 3 TDs.

24. The 2015 contest was another close call that literally came down to the last play of the game. Despite 274 yards rushing and three long touchdowns (55, 65, and 75 yards) from Ezekiel Elliott, the Buckeyes could not pull away from the Hoosiers. Backup quarterback Zander Diamont sparked the Hoosiers down the stretch with a 79-yard touchdown run to cut Ohio State's lead to 34-27 with ten minutes left on the clock. Indiana got the ball back with just under four minutes left in the game with a chance to tie or take the lead with a successful 2-point conversion. Diamont led the Hoosiers all the way down to the Buckeye 9-yard line before a desperate 4th-down pass fell incomplete as time expired.

25. In 2020 (the Covid campaign), the Hoosiers had one of their best seasons ever, finishing with a 6-2 record and ranked in both major polls. When the Hoosiers came to Columbus in Week 5, they were sporting a perfect 4-0 record with wins over traditional Big Ten powers Penn State and Michigan. At the time, Ohio State was ranked #3 in the nation but the Buckeyes had played some sloppy football in their first three contests (which was understandable given all the uncertainties and disruption caused by Covid) and they looked beatable for the first time in decades. In the first half, the Buckeyes looked anything but beatable as they raced out to a 28-7 lead (to be increased to 35-7 early in the third quarter). Then the Hoosiers caught fire, racking up four touchdowns of their own half while holding the Buckeye offense scoreless. The difference in the contest, a 42-35 win for Ohio State, turned out to be a 36-yard pick six from cornerback Shaun Wade. In the game, Indiana quarterback Michael Penix Jr. completed 27 of 51 passes for 497 yards, and 5 touchdowns, with wide receiver Ty Fryfogle being the primary beneficiary (7 receptions, 218 yards, 3 touchdowns).

26. For the past eleven seasons, the series has seen an incredible number of big plays by both sides:

28. Indiana enters the 2022 contest unranked with a record of 3-6 overall and 1-5 in Big Ten play. The Hoosiers are averaging 23.3 points per game and surrendering 32.2 points per game.

29. On the other side of the field, Ohio State has a record of 9-0 and is ranked #2 in the nation. The Buckeyes are averaging 45.8 points per game and allowing 14.7 points per game.

30. The game will be played in Columbus on Saturday, November 12, at noon; it will be broadcast on FOX. The Buckeyes are currently favored by 40.5 points, with an over/under of 57.5 points; and they have a 98.5% chance of winning the game according to ESPN Analytics.
Last edited: Nov 9, 2022
Click to expand...

Illuminatus Emeritus · From Novelty, Ohio
Movies, Music
Staff member BP Recruiting Team
Sort by date Sort by votes
More info please.
Upvote 0
I was at that 2014 game. There was a lot of "wtf is happening" well into the 3rd quarter until Jalin went nuts.
Upvote 0
You must log in or register to reply here.
Share:
Facebook Twitter Reddit Pinterest Tumblr WhatsApp Email Share Link
Top