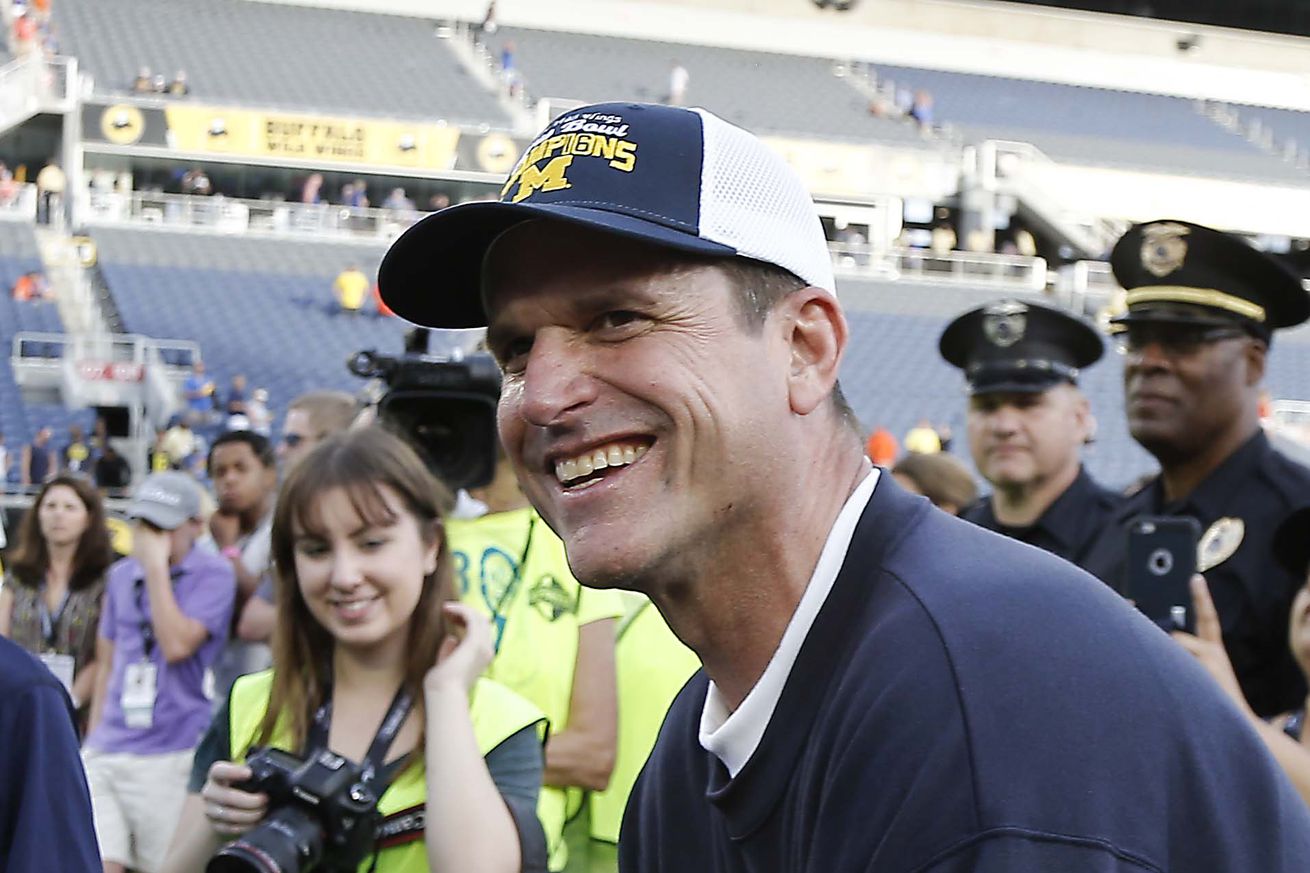 As is ordinarily the case, the truth lies somewhere in the middle.

The Internet starts to really heat up around National Signing Day, and this year, the bullseye is squarely on Michigan and Jim Harbaugh's coaching staff. Last night, another Wolverine commitment, three-star Rashad Weaver, "decommitted" from Michigan after being told that he was no longer guaranteed a spot in their recruiting class. He's now the sixth Wolverine to depart the recruiting class, and joins Erik Swenson as a high profile player who did not leave this recruiting class on his own terms.

Since we're now only eight days from Signing Day, and Michigan is still recruiting multiple players who are higher rated than either Swenson or Weaver, Michigan is getting a lot of heat. Some deserved, some probably not.

This would be a wonderful opportunity to climb upon the mountain of righteous indignation and smite Michigan. But it's more complicated than that. Here's one line of thinking about this whole rigmarole:


Sportswriters and those who follow the recruiting process very closely over multiple cycles know that offers sent out in July, and even verbal commitments, aren't official. Coaching staff changes, roster attrition, grades, injuries, and a slew of other factors could change the status of a recruit. But as Bud Elliott reminds us, recruits are children. They haven't covered this process for four, five, six years. They're rookies to a difficult, stressful and overwhelming process, and the adults in this conversation should be explicit about where kid stand, and give them plenty of time to process that information.

Michigan seems to merit the benefit the doubt; the coaching staff doesn't seem much in the way of top hat wearing, mustache twirling villains, abruptly dropping kids from their recruiting class right before NSD on their way to tie up damsels to train tracks. But it does seem like seem like some important communication has been lost in translation multiple times here. Whether that is willing deception on Michigan's part or not, it should change, and they will certainly be asked about it on the recruiting trail next summer. If you're a three-star prospect getting a Michigan offer, you better get some good answers about how committable the offer really is.


You've probably heard a lot that "every team" drops scholarships offers for kids during the recruiting process. And that's pretty accurate. You may feel differently, but there aren't big problems with many of the reasons kids may leave a class. Some struggle with grades and wouldn't be able to get through admissions. Some struggle with off-the-field incidents that could cause a coaching staff to rethink if a kid would be a good fit. Sometimes coaches change. Virtually every program has made changes for these reasons. Ohio State has. Other Big Ten programs have. Even BYU has. In a vacuum, this doesn't seem like a big deal.

Of course, programs also change scholarship offers based on tape and evaluations, and many might decide that a kid isn't as good as they thought, or wouldn't be a fit, or that they could get better players. You can determine if this is kosher with your personal morality, or your own personal definition of what college football should be.

The bigger issue is timing


Again, as Elliott pointed out, it's one thing to learn that your scholarship offer isn't guaranteed anymore in say, November. High school football is over then, and that still gives a prospect time to take official visits, build a relationship with other coaches, etc. Getting dropped just a few weeks before NSD really hurts a kid. It forces them to scramble with an important decision very quickly, and there may not be room at an equivalent program, especially if other coaches are not as liberal with their definition of scholarship offer. Some schools do this. "Everybody" does not do this. Ohio State, for example, has not done this during the Urban Meyer era. The recruiting process, by rule and through history, is pretty gross in many ways, and this would be another example.

That being said, it's not really worth being a member of the high horse recruiting posse


"Yeah, but somebody else is cheating too" is a pretty terrible defense of unethical behavior, but trying to go full moralist during recruiting season is a tough look, especially if you happen to actually be a college football fan. If you root for a decent FBS program, there is almost assuredly a bad recruiting look at your program over the last few years. Yes, even at Ohio State.

Are they all equal? No. But not every single player your team signs is a 4.0 Warrior Poet ready to double major in "Difficult Math" and "Orphan Raising". Not every offer your program sends out is committable. One can suspect some of the venom being thrown Michigan's way right now is because of the fanbase's insistence that Michigan Men don't need to stoop to the level of SEC or other programs with the wrong ideals and priorities. Nobody likes a hypocrite. It's another good reason to not be Twitter Recruiting Police.

Not every program is the same, but likely no one, or at least not anybody that's winning games that mean anything, is running things entirely in a way that would make Grandma proud, if that makes sense.

If you want to get indignant and write a #recruiting #thinkpiece, the best targets would be those who craft the rules of the game, rather than the coaches, and certainly not the kids.

The last week isn't a great look for Michigan football. It seems likely the staff will make a few changes in how they go about doing things for the class of 2017. But you shouldn't waste too much more breath over castigating them for it. You never know which program will be under the recruiting crosshairs next.