Is Ezekiel Elliott Ohio State's best pro prospect running back ever?
Ian Hartitz via our friends at Land-Grant Holy Land
Visit their fantastic blog and read the full article (and so much more) here 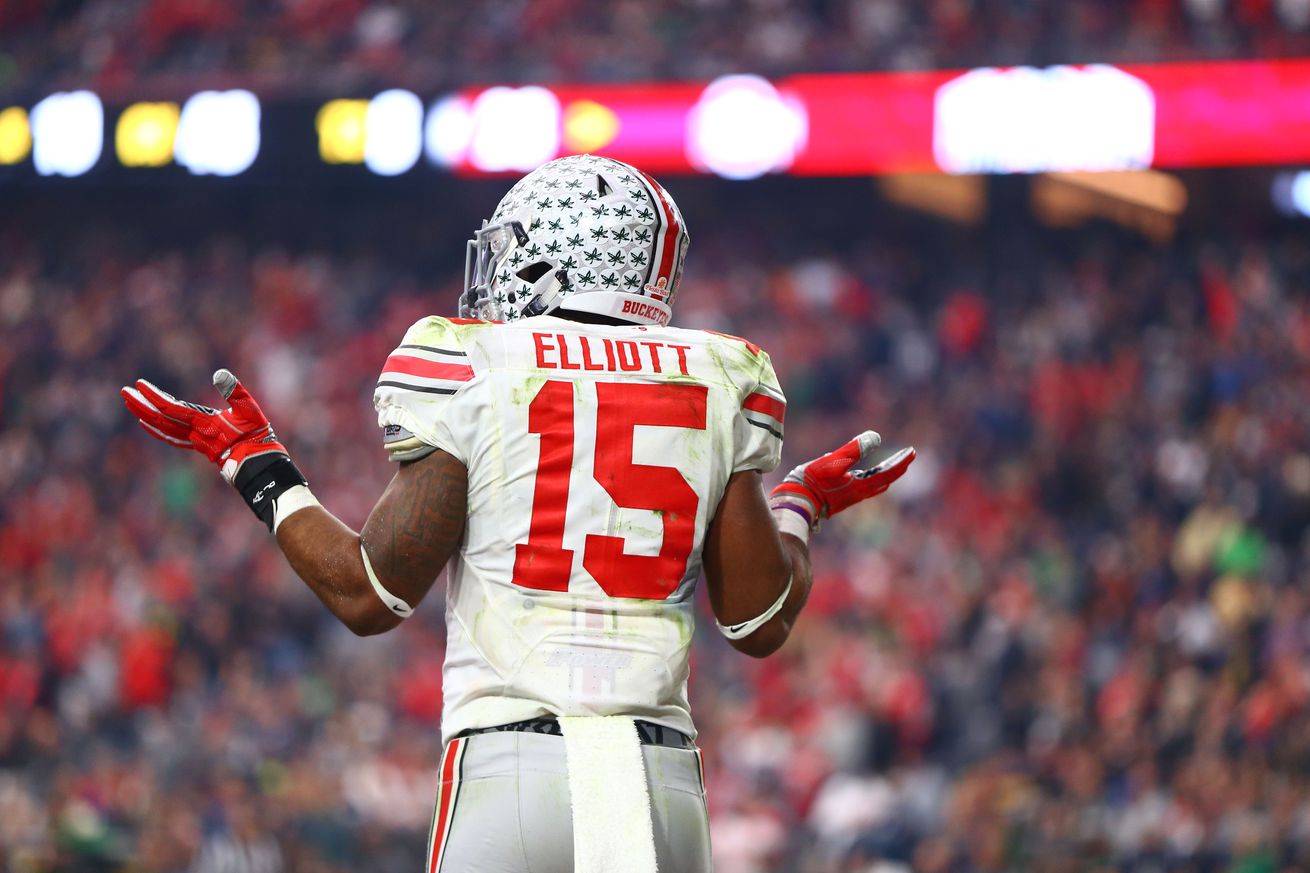 Ezekiel Elliott is as complete a running back as Ohio State has ever had enter the NFL Draft.

Ezekiel Elliott's time at Ohio State was a majestic mixture of long touchdowns, huge blocks, and awkward moments on live television. The running back who head coach Urban Meyer has stated is "the best player I've ever coached without the ball in his hands", Elliott has made an impact at Ohio State from day one whether or not he had the football.

And I mean day one. As a true freshman on a team with Braxton Miller and Carlos Hyde, there weren't a bunch of extra carries to go around on the 2013 Ohio State Buckeyes. Sure, against a team like Florida Atlantic Elliott got to show off with 162 yards and two touchdowns on the ground, but it was special teams duty the rest of the year for Zeke.

For a lot of stud running backs only playing on special teams could be a tough pill to swallow. Not for Elliott, as special teams just means another chance for Zeke to knock someone the hell out.


Yes, possibly the only thing more terrifying than watching Elliott come at you with the ball might be watching him come at you without the ball. But, Elliott was recruited by Ohio State to score touchdowns, and Zeke was happy to comply as the starting running back of the 2014 Buckeyes.

While Elliott's first few games as Ohio State's bell cow running back weren't too much to brag about, things changed once the Cincinnati Bearcats came to town. With folks thinking the 2-1 Buckeyes may be poised for a rebuilding year without Miller, Elliott took over the offense to the tune of 223 total yards and a touchdown.

As the season wore on Elliott became harder and harder to stop. 154 yards and two touchdowns against the stingy Michigan State defense was followed up by 121 yards and two more touchdowns against the Spartan's little brother. However, the infamous season ending injury to starting quarterback J.T Barrett meant that Elliott would need to carry a heavier load than ever before.


Twitter has a gif button now so I can post this gif of @EzekielElliott eating confetti whenever I want! pic.twitter.com/HOMP8krksJ

Elliott's junior year was one dominant game after another. A career high of 274 rushing yards against Indiana was highlighted by touchdown runs of 55, 65, and 75 yards, and it seemed the only people who could stop Zeke were his own coaches. Still, an incredible career was capped off with two last huge games against Michigan and Notre Dame that saw Elliott go for a combined 363 yards and six touchdowns.

Taking a look at Elliott's career stats should only backup what your eyes have told you all along: Zeke cannot be stopped.

Yes, Elliott has set himself up quite well for a potentially great NFL Career. But what exactly has some calling Elliott the best running back prospect since Adrian Peterson?


Seriously, what doesn't Elliott do well? The guy just ran a faster 40 than Braxton Miller at the NFL combine, has never met a linebacker he couldn't run over, makes one-handed catches while on the phone, and his blocking is the stuff of legends. Let's take a look at just one of many examples that demonstrates most of these skills. 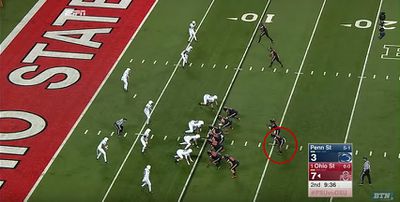 Decked out in alternate uniforms that Buckeyes fans either loved or hated, Ohio State was driving and faced a first and goal against the Penn State defense. 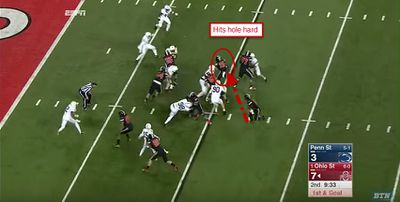 Elliott takes the hand-off and immediately explodes through the hole. What makes a running back special is the ability to turn a four yard run into 40, but sometimes in college football running backs depend too much on their speed and won't follow the play design. College athletes can get away with this at times, but it simply won't work in the NFL. Elliott consistently hits the designed hole fast, and this is a trait which is necessary in the NFL. 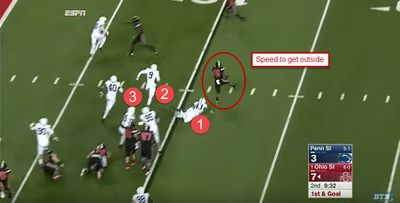 Now going backwards isn't exactly something that Elliott should make a habit of, but in this case it simply showcases his speed and ability to pull away from defenders. We've seen plenty of carries where Elliott puts his head down and gets what he can, but plays like this demonstrate he still has that innate ability to simply be a playmaker and find open space. 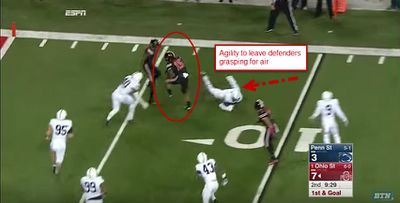 Upon getting his shoulders squared, Elliott leaves a defender grasping for air after a pretty juke move. Zeke may not have the total repertoire of moves that a guy like Braxton Miller has, but Elliott has consistently demonstrated the ability to juke, spin, and even hurdle the first man to get in his way. 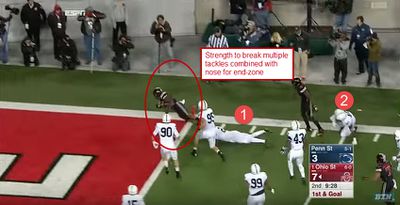 Finally, Elliott shrugs off two more tackle attempts with pure strength, and manages to stay in bounds long enough to find the end-zone. Watching Elliott consistently stay inbounds for as long as possible is a trait not often seen from too many skill position players, but it's a trait that helps turn plays like this into touchdowns.


I'm not calling Elliott a perfect running back, but what is there to critique about the guy? The weaknesses NFL.com presented are laughable, and while Elliott may not be ‘elite' at any particular skill, he's at the worst above average in everything. As for questioning Zeke's maturity when he made some questionable comments following the Michigan State loss, c'mon. What was he supposed to say? Say he was more than okay with receiving just 12 carries? Call me a homer but I'm not going to sweat one instance of ‘immaturity' when evaluating a running back who routinely gives more effort without the ball in his hands than any other play in the country.


The former Kansas City Chiefs star, Priest Holmes made a living as one of the most versatile running backs the NFL has ever seen. A career average of 4.6 yards per carry shows just how dominant Holmes was over his 10 year NFL career, and with an average of 34 receptions a year, the defense was never safe when Holmes was anywhere on the field.

Elliott's ceiling is very similar to what Holmes brought to the table: an explosive three-down running back who defenses must account for in all facets of the game. While Ohio State had trouble getting any of its pass catchers consistently involved in 2015, expect Elliott's great hands to be put on display in the pass friendly NFL.


Laurence Maroney, aka the less entertaining half of the once feared Minnesota Golden Gophers backfield, served a fairly productive six year NFL career that saw him consistently battling a barrage of injuries. At his best, Maroney was a consistent weapon out of the backfield for the late 2000s New England Patriots, but the former first round pick just couldn't quite establish himself as a NFL bell cow worthy of 20 plus carries a game.

For Elliott to have a ‘bad' NFL career, it's going to have to be because of struggles to consistently run the football. Zeke's blocking and receiving skills are going to give him a very long (as far as running backs are concerned) life in the NFL, as even if Elliott does not turn out to be a running back worth building your offense around, his unselfishness on the football field will always make him a productive player. Elliott's before mentioned tendency to impose his physicality on any and every defender could also be worrisome when projecting a NFL career over six or seven years.

NFL Draft projection: First half of the first round


Originally projected as a bottom of the first round type of prospect, scouts have not stopped gushing about Elliott's potential as an elite NFL running back. While Dallas at number four once seemed like a fairly possible destination, it now appears that the Philadelphia Eagles at pick number eight or the New York Giants at pick number 10 could be Elliott's new home.


What else could it be? 85 yards to the house. I look forward to seeing this play multiple times a year until the end of time.