How to watch Ohio State vs. South Carolina State: Preview, game time, live streaming online
Meredith Hein via our friends at Land-Grant Holy Land
Visit their fantastic blog and read the full article (and so much more) here 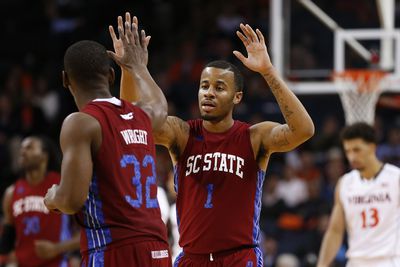 Ohio State is looking to win its fourth straight game in its last non-conference bout before starting its Big Ten schedule.

Even with three-straight wins for the Ohio State Buckeyes, it has been an ugly road up to this point in the season. Despite a 20-point win over Mercer last week, and an improbable victory over Kentucky just prior, Ohio State has made a lot of mistakes characteristic of the young team that they are. Nonetheless, they are managing to find some rhythm on both sides of the ball, and young players are growing into their new roles on the team just in time for the start of conference play on Wednesday.

Head coach Thad Matta credits strong defensive play by his squad in their most recent win over Mercer last week, in which the team missed its first 16-three point attempts. In addition to 17 steals, the Buckeyes also beat Mercer 17-4 on fast break points. Ohio State also had 16 turnovers to Mercer’s 25. It wasn’t pretty, even though it was a 20-point win for the Buckeyes, but the team has one more non-conference matchup to try and fix their errors before the conference season begins.

The matchup versus Mercer was also the first time we got to see freshman forward Mickey Mitchell, just days after the NCAA cleared him to play following questions of his eligibility. Though Mitchell was not immediately as impressive as his recruiting videos might suggest, he, like the rest of the Buckeyes, still has to grow in the system, and a non-conference matchup against South Carolina State would be a good time to work Mitchell into the rotation.

Despite this seemingly upward trajectory, the Buckeyes should avoid looking ahead to their first Big Ten game against Minnesota later this week. South Carolina State is coming off three straight losses, most recently a 98-71 loss to East Carolina last week. Senior guard Gabe McCray led the 5-8 Bulldogs in scoring with 15 points after an extremely slow start for his team, which was down 21-4 just six minutes into play. South Carolina State has shot 42.9 percent on field goals this season, which is just below Ohio State’s season average of 45.4 percent.

Still, the Bulldogs have significant experience that the Buckeyes lack. There is not a single freshman on the roster for South Carolina State, compared to six for Ohio State. Eric Eaves, the leading scorer for the bulldogs, is a junior, and senior center Daryll Palmer has been starting since he was a freshman.


Ohio State had 17 steals against Mercer. After averaging only 6.9 steals per game on the season, the Buckeyes had nine verse Kentucky before nearly doubling that number against the Bears. For a young team that is still trying to find its rhythm on offense, boosting defensive effort is critical to staying in the game even when shooting becomes stagnant.


The Buckeyes have made just 156-of-241 free throws on the season. This season average ranks 291st of 351 teams in NCAA Division I. And those missed free throws have mattered. In Ohio State’s five point loss to UT-Arlington, for example, the Buckeyes missed 14-of-27 free throws. Sill, things have been looking up from the free throw line, though not as much as we might hope. Ohio State went 13-of-17 on the line against Kentucky, and 7-of-9 against Mercer.


The freshman guard led the Buckeyes in scoring against Mercer last week, making 7-of-15 shots from the field for 18 points, matching his season high. Even so, he missed all three of his three-point attempts. In all, the Buckeyes shot 43 percent from the field, and were 3-for-22 on three-pointers. Lyle is fourth in scoring on the team with 9.8 points per game, but also came on strong with 11 points against Kentucky. An improved field goal percentage from Lyle--which currently sits at 38.9 percent--would provide the needed points for Ohio State from a guard perspective.


Though he will probably be coming off the bench, Mitchell is likely to make an impact in just his second college game. The 6-foot-7 freshman forward had missed the first 10 games of the season due to NCAA eligibility requirements centering around his high school academics. He was able to practice with the team this season, though he was not permitted to compete per NCAA regulations. In his college debut against Mercer, Mitchell played a total of eight minutes, had three rebounds and no points. This next game could give him a chance to continue to improve scoring for the Buckeyes.


Eaves is the leading scorer for the Bulldogs, averaging 14.8 points per game this season. The 6-foot-3 junior guard is averaging 27.5 minutes per game--the second highest average on the team--despite not playing any significant time for the Bulldogs prior to this season. Eaves also leads the team in steals, averaging one per game. He scored 13 points in the Bulldog’s last game against East Carolina, along with three steals and one assist.


Palmer, a 6-foot-8 senior from Summerville, S.C., leads South Carolina State in rebounds at 5.9 per game, as well as blocks at 1.2 per game. The senior center has been averaging 7.8 points per game on the season, and shoots 44.3 percent on field goals. After winning the starting job at center his freshman year, Palmer has had four years of significant playing time, which could be to his advantage against the less experienced Daniel Giddens and, to a lesser degree, Trevor Thompson.