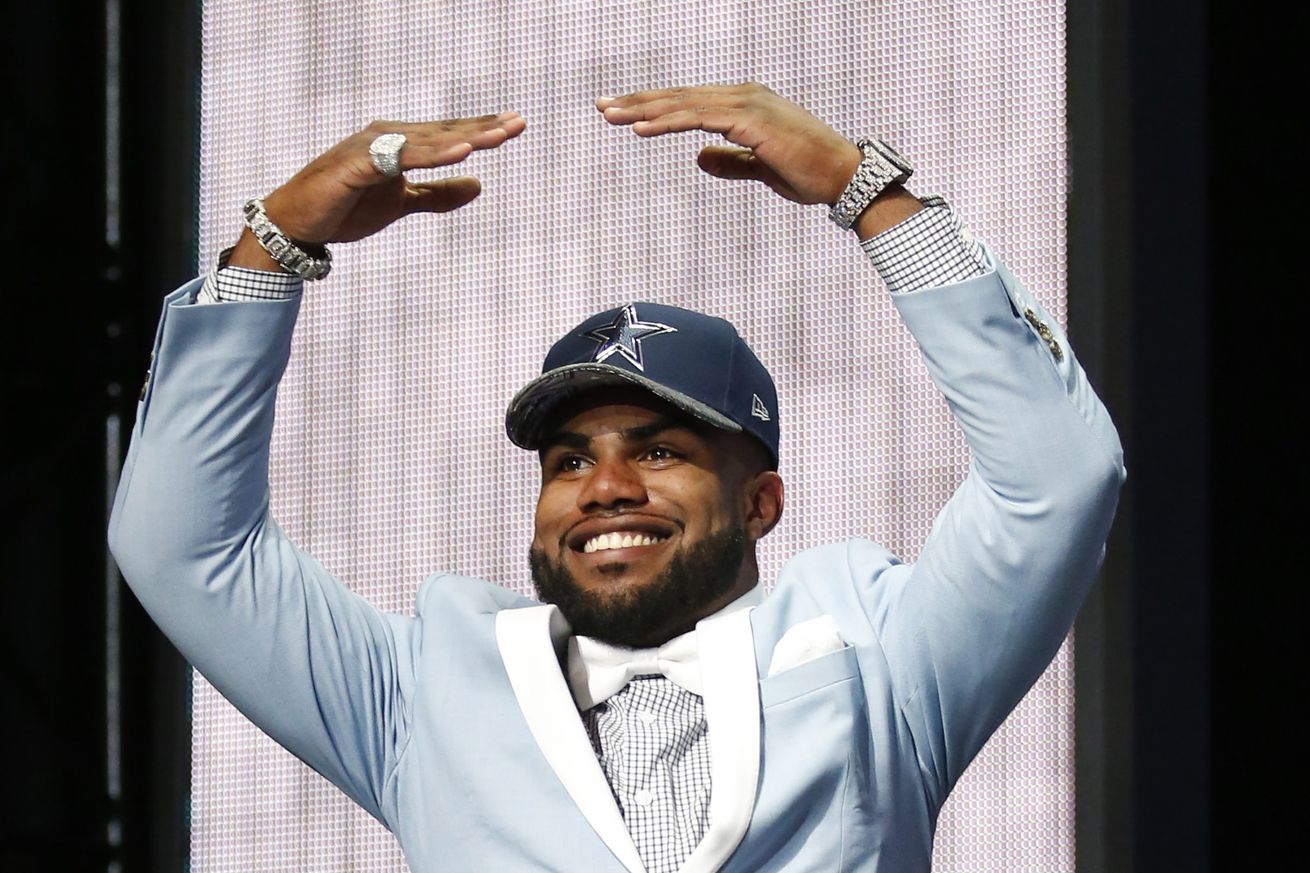 In case you haven't heard, Ohio State just had arguably the greatest NFL Draft class of all time. This is fantastic news and all, but let's step away from these large numbers for a second and focus on the real news: the actual first round draft picks.


After months of speculation that Bosa could fall in the draft, he ended up being the first non-quarterback taken. While some (Mel Kiper) have scoffed at the idea of Bosa playing in a 3-4 defense, San Diego felt perfectly comfortable slotting Bosa in as their five technique defensive end for years to come.

The idea that Bosa has a specific fit along the defensive line is absurd. Ohio State regularly utilized Bosa on both the inside and outside of the defensive line, and his versatility is one of the factors that made him such a desired prospect. Bosa as a 3-4 end will be able to take advantage of guards not used to dealing with such a dynamic inside pass rushing force, and Bosa will also be covered up by a pass rushing linebacker, something that will further help Bosa due to his lack of elite speed off the edge. 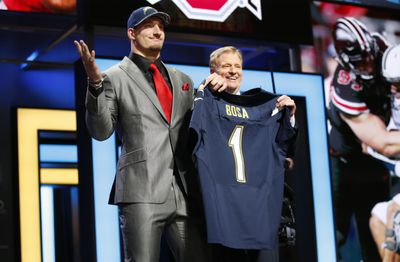 "When you turn on the film and watch the way he plays; the passion, the energy, everything....Any game you turn on, you saw 97 out there taking games over. He may not be getting a large number of sacks week-in and week-out, but the pressure he got on the quarterback week-in and week-out (was big). Those hits on the quarterback, the whole entire team feels. We just love his passion for the game. When he walked out of the room at the Combine he said, ‘I can't wait to put that Chargers helmet on one day.' I mentioned (that) to him tonight. The fans are going to love him."

No. 4 -€” RB Ezekiel Elliott to the Dallas Cowboys


The Dallas Cowboys have one of the best offensive lines in the entire NFL, so naturally the entire pre-draft process consisted of running backs gushing about how well they would fit in Dallas. Zeke was no different, but he has a point: Ezekiel Elliott is a perfect fit for the Dallas Cowboys.

Yes, the giant holes Elliott should get used to running through will be great and all, but more than anything it's Elliott's receiving and blocking ability that could really give the Cowboys' offense a new dimension. Keeping the aging Tony Romo upright has been the number one priority for years now, and adding the best college blocking running back in recent memory will certainly help matters. Additionally, while Marion Barber, DeMarco Murray and Darren McFadden have given the Cowboys respectable pass receivers over the years, none match Elliott's natural hands or explosiveness once he gets the ball. 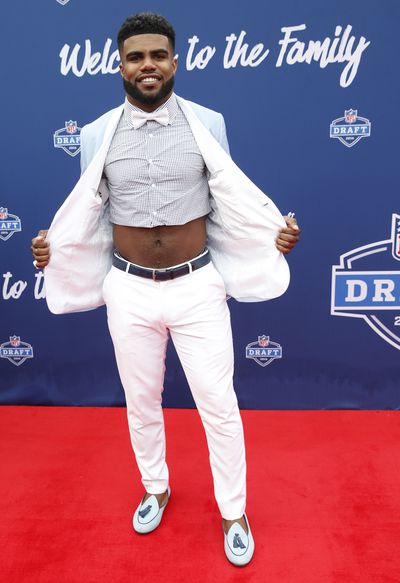 "Jason Garrett (the Cowboys head coach), on Monday, closed his office door and spent seven hours looking at every snap of (Jalen) Ramsey at Florida State in 2015, and every snap of Elliott at Ohio State in 2016. He liked Ramsey. He loved Elliott."


As far as the fit is concerned, Apple in New York is just fine. Every team in the league could use more tall corners with press coverage skills, so it would've been hard for Apple to find a situation that wouldn't utilize his talents.

The only concern with Apple is the fact that he was drafted so high. Being drafted 10th is great for Apple financially, but the expectations for him are going to be sky high from Day 1. While Apple's excellent sophomore season turned him from a possible early NFL Draft entrant to a sure fire first rounder, Apple's technique is still a bit raw and he has a ways to go before he can even think about consistently locking up NFL wide receivers. The good news is Apple will get eased in a bit behind established corners Janoris Jenkins and Dominique Rodgers-Cromartie. Apple has all of the talent in the world, let's just hope that New York is okay with patiently waiting for a year or two.


Praying for all the thirsty girls sliding in new NFL rookies DMs with heavy booty & cleavage action pics. Only Jesus can quench your thirst

"He was an easy pick, and it was a value pick, No. 1, because he's the highest player on our board and was a need pick because we have two corners, and like I said during the draft, if you only have two corners, you're one corner short in this league."


Taylor Decker came in right about where he was projected, and ended up in a pretty great situation with the Detroit Lions. With Riley Reiff filling in as the Lions' left tackle, Decker should start from Day 1 at the more rookie friendly right tackle position.

Decker has faced some criticism regarding his pass-blocking ability, and landing in Detroit provides him one of the best possible opportunities to prove his naysayers wrong. The Lions are going to run the ball more this year out of pure necessity since Calvin Johnson is no longer around, and that is right up Decker's alley. No one has doubted Decker's ability to maul defenders in the run game, and playing right tackle has always been the preferred position for young tackles still developing their pass protection skills.


Stopped by the zoo today to say hello to 'Taylor' & 'Decker', the two clouded leopards that the @columbus_zoo named after me. Such a cool honor by some of my favorite people I've ever met.

"I think he has good pass protection skills...Good run blocking. I thought he was a really, really solid overall player that can really help the Lions. We spent a lot of time with a lot of the offensive linemen in the pre-draft process, including Taylor, and it really came across to us that he was clearly the best guy on the board at the time."


After having one of the best combines in the entire draft, the sky seemed to be the limit for Lee's draft stock. In the end Lee's draft position seems about right, considering the insanely talented linebacker has only played the position for three years.

Lee may have the best fit for any Ohio State draftee not named Ezekiel, as head coach Todd Bowles has been known to get the most out of his defenses in both New York and formerly Arizona. Lee will have a bit of a learning curve as he projects to slot in as one of the Jets' 3-4 middle linebackers, but luckily for Lee: the New York Jets have one of the best defensive lines in football. Muhammed Wilkerson, Sheldon Richardson, and Leonard Williams are all available to eat up blockers which will let Lee do what he does best: make plays.

"He's an inside linebacker. He can play the nickel right now, and he's going to grow into a three-down 'backer. ... He makes us a lot faster and you can do a lot of things with him. He's a very good pressure guy, he's a very good cover guy, and he runs sideline to sideline."