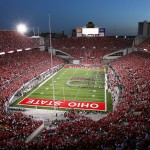 Welcome to your tri-weekly look at all things Ohio State recruiting. Let’s get started!

The Elephant in the Recruiting Class:


I’ve avoided writing about Shaun Wade for as long as I can on here because honestly I was just tired of reading about him myself. He has been committed to the Buckeyes for a year and eight months now, and he resembles the closest thing to a non-commit that you can see. He has said all the right things, making the 100% committed declaration, and saying OSU is his leader still. Then why all the drama? He has said that he will be taking all five of his official visits while still being committed to the Buckeyes. I know that this is common practice among high school kids now, get your foot in the door and commit to save your spot, then look around for a better option. If Shaun Wade wants to be a Buckeye then fine, end it and come join the fray. If he doesn’t, decommit and open the spot for someone who does want to be a Buckeye. However, I am sure that this will continue to drag on as Wade is one of the most talented defensive backs in the country in the class of 2017, and any team would be lucky to have him. Unfortunately we probably won’t find out where he will be attending college for real for quite some time.

Wade will be on the campus of Notre Dame this weekend as the Fighting Irish take on the Michigan State Spartans in what should be a quality match-up of two of the countries premier programs. He is also expected to visit Alabama and Ohio State, and will fit in two other schools into his schedule as time permits. If the experts at 247 are correct, then Wade will be flipping to the Crimson Tide as he holds a 78% crystal ball prediction currently. The Buckeyes handed out another offer yesterday to a class of 2018 athlete in Fredrick “Juice” Scruggs out of Erie, Pennsylvania. Scruggs is listed as a 4-star offensive guard with 11 offers to date. He recently visited Pittsburgh and Penn State. He holds offers from Michigan State, Penn State, Syracuse and Iowa State among others. Scruggs is the 7th ranked athlete from the state of Pennsylvania for the 2018 class and is the #9 overall offensive guard.


The Buckeyes already have commitments from Tate Martell, Tyjon Lindsey and Haskell Garrett from the Bishop Gorman Gaels out of Las Vegas, Nevada. The #1 high school program in the nation has boat loads of talent, and Ohio State is trying to mine the state like prospectors did during the gold and silver rush. Bubba Bolden could be the next of these stars to join his teammates at Ohio State. While the Buckeyes wait to see what guys like Jeffrey Okudah decide to do, they aren’t putting all their eggs in one basket and thus we have seen a few offers go out to class of ’17 safetys, Bolden being one of them.


Bolden was at one time a USC commitment, but backed off that pledge back in July. He has since then received offers from Boise State, Florida, Oregon and of course Ohio State. It sounds like Bolden will attempt to make a visit to Ohio State this fall before making a final decision, and he cites his relationship with his current teammates in an interview with Rivals Adam Gorney ($) as a reason why.

“Tyjon is like a brother. Tate is like a brother. Haskell is too. They’re recruiting me,” he said. “Me and Tyjon have a connection. We’re not rich kids and we came from nothing, and now we’re here making it big-time, making big-time plays and having offers. He and I want to stick together, and I think we can and we could do big things.”


Jackson Carman might be on of the must get recruits for the class of 2018. He is the #1 prospect in the state of Ohio and the #3 offensive tackle in the nation. He currently holds 33 offers, but he spoke with Bill Greene of Scout ($) as to why the Buckeyes are his leader.

“Ohio State is my leader,” Carman admitted after the game. “Having Coach Meyer and Coach Stud come see me play was great, but during the game I wasn’t thinking about that at all because I wanted to win. In the heat of the game, stuff like that doesn’t cross my mind.”

Coach Studwara and Coach Meyer were on hand to watch Carman and his Fairfield High School team take on Dublin Coffman. He said it gave him a bit of “extra incentive” to play hard knowing they were in attendance.

“He has a great personality and he’s easy to talk to,” Carman noted. “I can tell when I’m talking to him about football that he knows what he’s talking about. I may not know something, but when he explains it something clicks and I think his way of coaching is really good.”

Carman recently visited Notre Dame last weekend and has plans of visiting Michigan State, Alabama and Ohio State at some point this fall. He has no timetable on a decision yet, but likely will wait until his senior season.


The post Heard Around the ‘Shoe – 9/14/2016 appeared first on The Buckeye Battle Cry: Ohio State News and Commentary.