Game Notes: Ohio State women drop first game of the season vs. Iowa
1ThomasCostello via our friends at Land-Grant Holy Land
Visit their fantastic blog and read the full article (and so much more) here 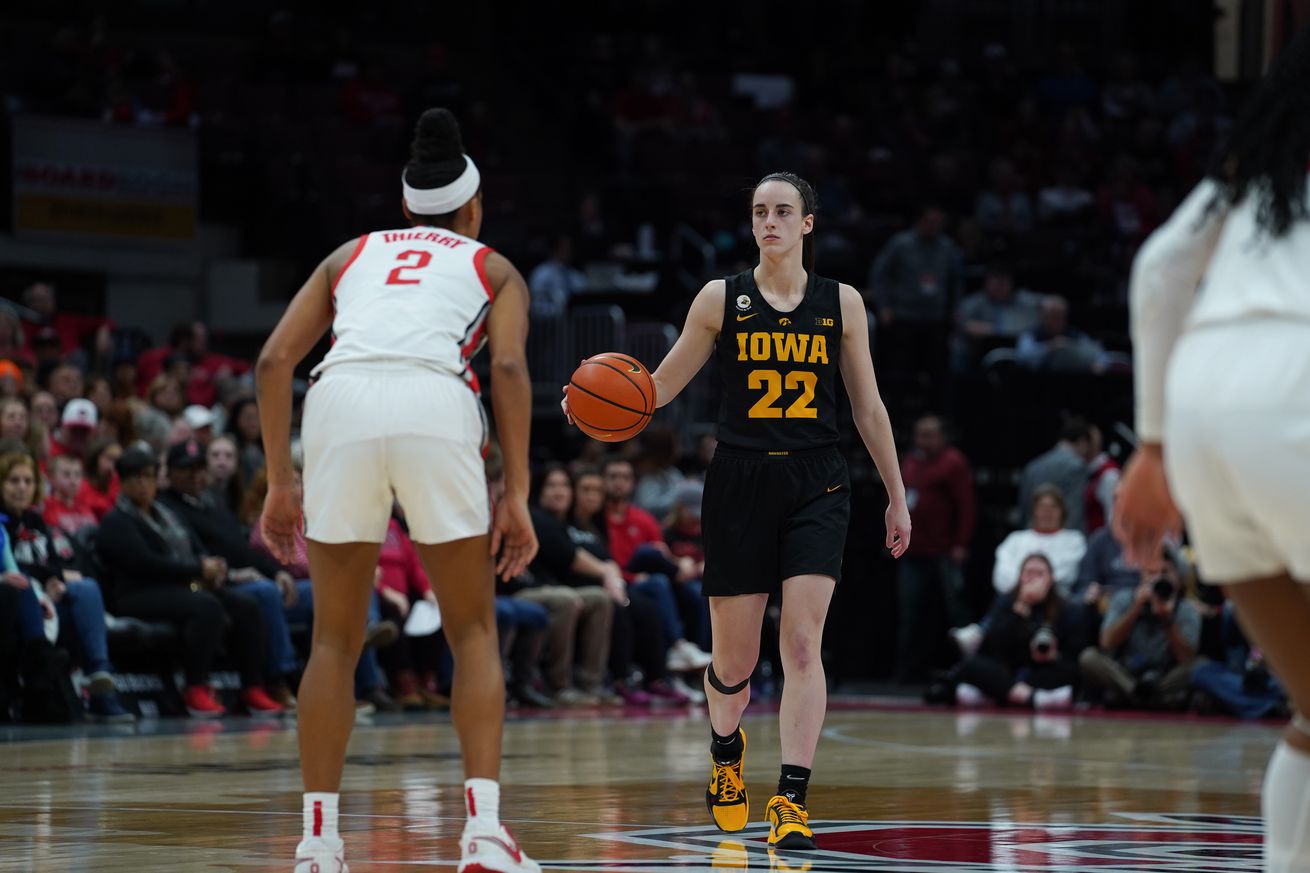 Looking deeper into Monday’s game between the Buckeyes and Hawkeyes.

It took almost three months, but the Ohio State women’s basketball team added a number to the loss column for the first time this season. Against the Iowa Hawkeyes, the Scarlet & Gray competed for two of the four quarters, but in the end, it was the visitors ending the historic Buckeyes run.

Here are the takeaways, the constructive and positive, from Monday’s defeat in the Schottenstein Center.

It doesn’t take long to notice the ability of the Hawkeyes. In the first quarter, going down early, Iowa didn’t panic. Instead, they hit early threes to cut Ohio State’s lead and sliced through the Buckeyes' defense.

Their game plan doesn’t take long to notice either: Get the ball to Caitlin Clark. After every rebound, or change of possession, the Hawkeyes get the ball to their superstar guard who all night was continually finding an open teammate.

Those great shots came from center Monika Czinano. For much of the game, Czinano was the beneficiary of Clark's passing and passive Ohio State defense in the paint. The center scored 22 points on 11-for-13 shooting. Clark had a 14-assist night, her highest of the season.

Clark shifted in-game from distributing to scoring too. The guard scored 28 points, with one three coming from seven-plus feet beyond the three-point line. It all went towards a triple-double with 10 rebounds on top of the scoring and assisting.

“Iowa deserved to win the game,” said McGuff. “They were certainly the better team tonight; they were more efficient on offense. We got rebounded by 20, you’re not going to beat any good team in this league when that happens, and we went 4-for-25 from three.”

Making matters worse for the Scarlet & Gray was their shooting. The Buckeyes’ 24-point first quarter featured two threes, including one by guard Taylor Mikesell at the buzzer, but Ohio State only made two more from deep the rest of the game.

The outside shot wasn’t working all game, and there was no magical fix.

“We’ve got to step up and make them,” said McGuff. “I would like to tell you some big form but most of them are horse shots. I don’t think we were asking anybody to do anything they weren’t capable of doing but we just didn’t make a lot of shots tonight and you’re not going to beat Iowa the way they were guarding us if that was the case.”

It got to the point where the Hawkeyes were letting most Buckeyes take threes. Of the six Buckeyes who attempted a three, only one player, Mikesell, hit multiple with two on the night.

Ohio State went 16% from deep, more than half their 35.2% efficiency from three-point range entering Monday’s game. The scoring instead fell on the shoulders of two underclassmen.

After Mikesell hit a three to end the first quarter, Ohio State had a stretch of 14:49 of game minutes where it was freshman Cotie McMahon and sophomore Taylor Thierry doing all the scoring.

McMahon and Thierry were doing the one thing that Iowa struggled to stop all game — attacking the post.

The two scored 41 combined points, with McMahon grabbing one more point than Thierry with 21. Their “rush the basket” mentality meant they also got to the free throw line frequently, as the only two Buckeyes who stepped up for the free shots more than two times. They were a bright spot in an otherwise dim overall team performance.

“In the second half especially, they really carried us,” said McGuff. “They were aggressive yet under control and they really competed, and I thought both of them were really great tonight.”

Clark was also guarded by both throughout the game. For spells, they were effective against the guard, with multiple assists for the guard coming in their transition offense as the Buckeyes attempted to press.

In the third quarter, the two were part of holding Iowa for over five minutes without a basket. They weren’t alone in that work, because a third Buckeye stood out with an impressive performance.

At the beginning of the season, coach McGuff spoke about needing depth in the forward position. Over the past few weeks, forward Eboni Walker’s minutes have increased off the bench, and Monday, as Czinano was heavily impacting the game, Walker came in and had her best performance as a Buckeye.

Walker helped improve Ohio State’s defense in the paint. Czinano’s two points in the third quarter came before Walker entered the game and once Walker did come into the game, Iowa scored only two points overall for the remaining 6:27 of the period.

“I told her right there 'we need her, we need her,’” said McGuff. “Her energy was great, she was our best post-defender tonight. You know, Czinano was excellent around the basket but Eboni, I thought, her energy bothered her. So, I think we need her athleticism, her energy, and her skill more consistently.”

Points and rebounds-wise, Walker had four of each, but outside of the stat sheet, the transfer showed her potential in the Buckeyes’ lineup.

Learning from the Loss​

All season, McGuff and the Buckeyes seemed to handle the winning well. From the outside, they said all the right things about not focusing on the ranking and looking ahead to the next game.

On multiple occasions, coach McGuff expressed that the Buckeyes, at some point, would lose a game in a tough Big Ten conference schedule.

Now, the Scarlet & Gray have a chance to show that they can learn from a defeat of Monday’s magnitude. Thursday, it’s a trip to Bloomington, Indiana against a sound veteran Hoosiers team that features a player who’d likely win the Big Ten Player of the Year if Clark wasn’t in the conference, forward Mackenzie Holmes. Practice picks up again Tuesday.

“I feel like it is easier to buckle down after a loss. Nobody wants to lose two games in a row, let alone one,” said McMahon. “Tomorrow we’re all going to be really focused. No time for jokes or anything. We’re here for one thing and it's to beat Indiana.”

The quick turnaround could be a good thing for the Buckeyes. Monday’s loss is still fresh in their minds, and they can turn the areas they need to work on into the gym immediately. Thursday’s performance will show what Ohio State is made of.

Ohio State sold out the Schottenstein Center for the first time in the program’s history. The crowd of just under 10,000 was loud for spells and saw the moments that’ve made this season’s Buckeyes team one of the best in the history of the women’s basketball program.

Monday was the best attendance of the season, even with big games against the Michigan State Spartans and Illinois Fighting Illini during Big Ten play. Next up is Purdue University on Sunday.

“The crowd was incredible,” said McGuff. “I really appreciate the community getting behind this team. Even though we didn’t play well tonight and lost I’m hopeful that they’ll continue to show up because they’ve been very impactful for our season.”