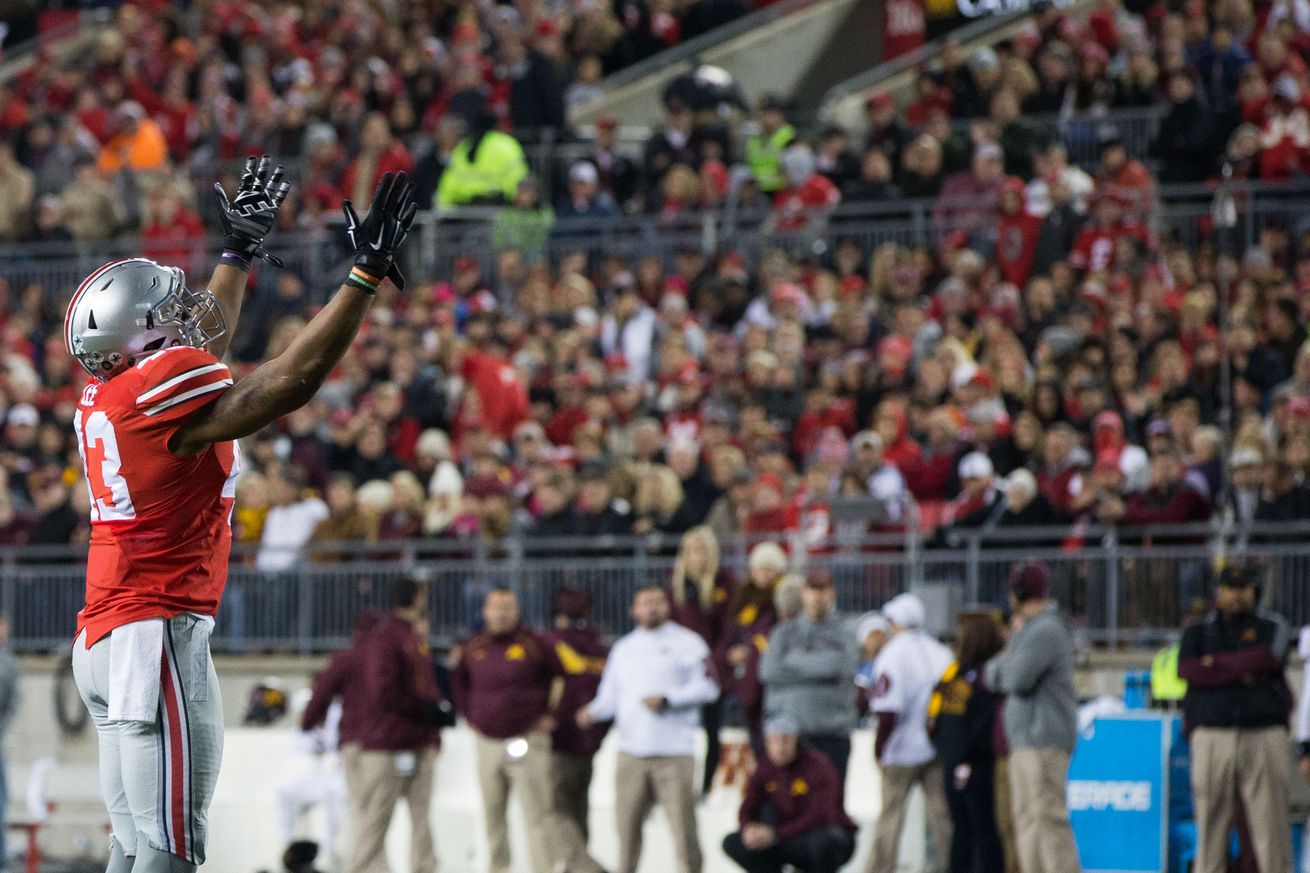 With prototypical NFL size and speed, the ceiling on Apple's NFL career couldn't be higher.

It's not often that a potential first round draft pick manages to fly under the radar for the entirety of his college career, but that just might be the case with Eli Apple.

The second ranked prospect in all of New Jersey, Apple showed up to Ohio State as a highly touted four-star corner who was expected to come in and make an immediate impact in a secondary that was badly searching for play-makers. But, the road to glory (#BringBackNCAAFootball) wouldn't be so easy for Apple.

What started as a perception that Apple was lazy turned into an actual illness. It took Apple a year to get his black stripe removed (these are given to freshman and they are typically removed before the season starts if the freshman earn it) and this was due to his lack of energy both on the football field and in the classroom. As it turned out, Apple was suffering from an iron deficiency that didn't allow him to go all out all the time. With this problem fixed, Apple was able to enter the 2014 season healthy, and ready to make an impact.

And make an impact he did. Apple started from game one as a red-shirt freshman and proved invaluable to the Buckeyes' secondary. This was most evident during the Buckeyes late season trip up to East Lancing.

A revenge game from the previous years' Big Ten Championship, Apple was hurt and despite dressing, wasn't expected to play. That was before a younger Gareon Conley got roasted for two big catches and a touchdown on the Spartans first drive, and Apple was quickly ready to sub himself back in the game to calm the fire. This gutsy performance was highlighted by four tackles, two pass deflections, and a crucial fourth down tackle for a loss that showed just how good Apple can be.


The success continued for Apple, as despite being the number two corner behind Doran Grant, Apple regularly shut down his side of the field and did a great job containing Alabama stud wide receiver Amari Cooper in the College Football Playoff semifinal as well.

Apple's storybook red-shirt freshman season concluded in the most perfect way possible: an interception off of Heisman winner Marcus Mariota as the clock expired during Ohio State's 2014 national championship victory. Apple had far surpassed any and all expectations going into 2014, now it was time to see what he could do as the number one corner of the silver bullets.

While the term lock-down corner is overused, watching Apple function in as a press man corner is a site to behold. The speed and length to match up with any receiver in America, Apple made life difficult for anyone trying to take on the top corner of the country's number six ranked pass defense.

Apple's shining moment came against Notre Dame in the Fiesta Bowl. Facing off against speedster Will Fuller, Apple was named game MVP as he held Fuller to 32 yards on five catches (Gareon Conley allowed Fuller to get loose for an 81 yard touchdown before the Buckeyes' permanently switched Apple to cover Fuller).

While Apple showed plenty of skill at Ohio State, he only helped his NFL draft prospects with a blistering 4.4 forty time at the NFL Combine, and Apple showed off his skills as well.

Casually making a one-handed catch during drills at the #NFLCombine https://t.co/lXWLKlAY01

— NFL (@NFL) February 29, 2016​
Taking a look at Apple's overall numbers, you see what he is as a corner: not afraid to make a tackle, and always around the football.

So what is it about Apple that has some projecting him as high as a mid-first round pick? Let's find out.


You will hear a lot of draft analysts talk about how Apple has ideal size and length for a corner. At 6'1 with arms that never seem to stop, Apple has the size to match up with the new age wide receivers who can pick on smaller corners with ease.

While at Ohio State, Apple was asked to do different things in coverage, but it was his ability to play press man better than almost anyone else that has scouts salivating. One such example is this play against Notre Dame in the Fiesta Bowl. 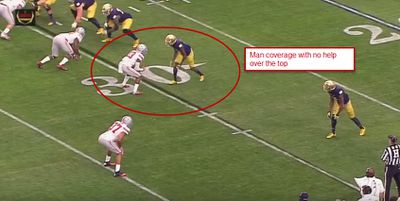 Apple is matched up against Fighting Irish wide receiver Chris Brown, Apple is locked into man coverage with no safety help over the top. A scary proposition for any corner, and to have to face off against Brown in the slot is something that Apple wasn't asked to do with regularity, adding to the degree of difficulty. 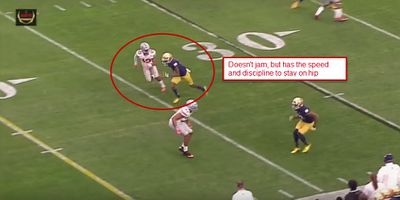 Apple gets away with not even jamming Brown, as Apple trusts his speed and ability enough to know he can run with Brown. Importantly, Apple stays in ideal position at the receiver's hip and on the inside. Job number one for any defender in coverage is to take away the inside, and Apple accomplishes this while also staying on top of Brown enough to create tight coverage. 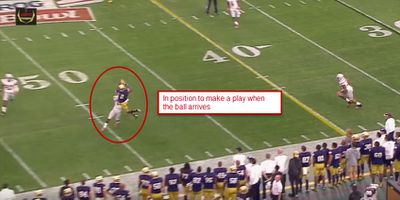 Apple has essentially taken away Brown's breathing rights by the time the ball arrives, and it's a wonder that quarterback DeShone Kizer even attempted to make this pass. 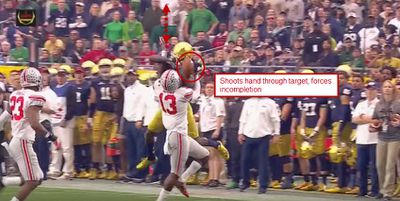 When the ball arrives Apple doesn't look back. This habit has led to Apple not having as many interceptions as some might expect a top corner to have, but it is far from pass interference. Apple does not initiate contact until the ball arrives, and with his incredible timing Apple is able to shoot his hand straight through the ball and Brown's arms, forcing the incompletion.


Apple was known to get a bit grabby with wide receivers and this will need to be fixed through more attention to his technique. Aggressiveness out of a corner is a good thing, but not when it causes zebras to throw their flag.

Additionally, there are concerns that Apple is a fairly regular corner outside of his ability to play great press man. It's important to remember Apple is just 20 years old and there's no reason to believe he can't develop the ability to play better off-man and zone coverage. Luckily for Apple, the ability to play press man is what NFL scouts are really looking for out of corners these days, as in the ever evolving NFL pass offenses, having a corner who can simply eliminate his man for an entire game is invaluable.


Davon House was drafted in the fourth round (which Apple will not last till), but his career success is still at a level that Apple should strive for. At 6'0, 196 lbs, House possesses similar size to Apple, and has used this size to make himself a productive member of the Green Bay Packers and now Jacksonville Jaguars secondary. With only six interceptions in four years, House doesn't give you great upside in terms of forcing turnovers, but what you have in House is a solid corner who is more than capable at battling some of the better receivers in football.

Apple (probably) isn't going to turn into DarrelleRevis or Richard Sherman. That's fine, not many corners ever find that type of success. It's not hard to see Apple as a very high upside second or third corner on a great defense however, similar to the job former Buckeye Bradley Roby has done in Denver.


The worst case scenario for Apple is that he comes into a situation where he is immediately viewed as the number one corner on the team and he is forced to match up with each team's number one. At corner, confidence is key, and watching former number six overall pick Morris Claiborne become a shell of his college self as he repeatedly got beat and failed to make impact plays is a view that Apple must do his best to not replicate.


I've seen Apple go as high as Oakland at pick 14, but in all likelihood Apple will hear his name called at the end of the first round or towards the beginning of the second. Corners who can play press man are hard to find, and Apple's strong combine have given him a very healthy floor in terms of how far he could potentially fall.


One of the biggest plays of the national championship. Third down inside the Ohio State 10 yard line. The Ducks were looking to take the lead for the first time since it was 7-0. Not on Apple's watch.