Can Ohio State’s Men’s Basketball team make the NCAA tournament?
Michael Smith via our good friends at Buckeye Battle Cry
Visit their fantastic blog and read the full article (and so much more) here 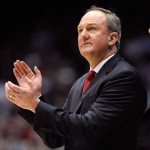 Hello everyone and welcome as I give you my honest opinion as if the Ohio State men’s basketball team has any chance at making the NCAA Tournament this year.

Well, their chances took a huge hit this past week and we learned Sophomore Jae’Sean Tate, who has been Ohio State’s most consistent player this season, will be gone for the season due to a shoulder injury. Tate was averaging 11.7 points and 6.5 rebounds a game.

However, his season will forever be remembered for this.


Then Ohio State went out and got destroyed on their home floor by Michigan State 81-62. This left Ohio State with a 18-11 overall record and on the outside looking in at the NCAA Tournament.

Ohio State came into this season with low expectations, however, it seems they have underachieved this season. Early in the year they looked like a team full of freshman and underclassmen. Losses to terrible teams such as Memphis, Louisiana Tech, and UT-Arlington have really put this team in a corner now.

Ohio State also has been very bad against the good teams they play. Ohio State has just a 2-8 record vs the top 50 RPI in the country. The only 2 wins are vs Kentucky and Michigan. Ohio State has been blown out by Maryland, Michigan State, Indiana, Purdue and UConn.

Needless to say it will take a miracle for Ohio State to be included in the NCAA Tournament come March.

Here are the 2 ways it can be done. The 1st way is to earn an at large bid.

Ohio State must, and I mean must, win their last 2 regular season games vs Iowa and Michigan State, then make a deep run in the Big 10 Tournament. Doing that might get Ohio State in as an at large bid at a very high seed (10-12). They might even have to play a play-in game. Now, that is no easy task considering how Ohio State hasn’t been very competitive this season vs teams the like of Iowa and Michigan State.

Currently Ohio State would be the 7th seed in the Big 10 Tournament with a 1st round game vs Nebraska. A team that just took Ohio State to overtime and gave the Buckeyes everything they could handle and more.

Needless to say its a up hill climb for this year’s Ohio State team to make it into the NCAA Tournament and that hill become Mt. McKinley when Tate went out for the year and the blow out loss to Michigan State this week.

The future does look bright in Columbus though. If everyone returns next year they should be able to make it back to the tournament.

Till the next episode, Chill!

‘17 The Deuce Champ
Fantasy Baseball Champ
'18 The Deuce Champ
I would be pleasantly surprised to make the tournament this season. This team may well bow out of the B1G tourney with an 18-14 record. I'm hoping to get to 20 wins, somehow.