B1G Women’s Basketball Tournament: Day 1 Recap
Charles via our good friends at Buckeye Battle Cry
Visit their fantastic blog and read the full article (and so much more) here 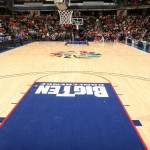 The Big Ten Women’s Basketball Tournament got underway today at Banker’s Life Fieldhouse in Indianapolis; I still want to call it Conseco Fieldhouse after going to so many tournaments there when it had that name.

The first game of the day saw 12th seeded Northwestern take on 13th seeded Wisconsin. Northwestern had been ranked in the top 20 at the start of Big Ten play but then the wheels fell off and the Kitties went 4-14 in the conference. The Badgers were even worse and entered the tournament having lost six straight games. Northwestern was playing without their senior star Maggie Lyon, out with a lower leg injury, and it definitely had an effect on them. The first half was a tight, back and forth affair with neither team able to take more than a one basket lead. After holding a one point lead at halftime, the Badgers seemed to take control of the game in the second half, scoring the first nine points to go up 42-32 halfway through the third quarter. The Wildcats would slowly chip away at the lead, pulling within two points late in the third quarter and retaking the lead midway through the fourth. The last six minutes were an exciting affair with Wisconsin retaking the lead in the last minute only to see Northwestern tie the game on a late layup to force overtime. Overtime continued the tight game but Northwestern was able to hang on for a 76-72 victory thanks to their performance at the free throw line in the final minute.

The second game saw 11 seed Penn State taking on 14th seed Illinois. After struggling for most of the season, Penn State managed to improve late in the year, going 3-3 in their final 6 games which included a road upset of a top 20 Michigan State squad. Illinois was just plain awful this year, coming up with only two Big Ten wins, both against Wisconsin. Penn State led for almost the entire first three quarters of the game and were up by 8 late in the third but Illinois would score the final six points of the quarter to make it a two point game. The Illini would tie things up at the start of the fourth but the Nittany Lions quickly retook the lead and slowly extended, keeping Illinois at arm’s length on the way to a 74-64 win.

The second round of the tournament gets underway tomorrow when 8th seeded Iowa takes on 9th seeded Michigan. The two teams split their regular season meetings with the home team proving victorious each time. The Wolverines seemed to have some momentum down the stretch but it will be interesting to see if a blowout loss to Rutgers in the regular season finale will effect that. The Hawkeyes stumbled down the stretch but did finish the season with a win against Illinois.

Following that game 12 seed Northwestern will take on 5 seed Minnesota. The Golden Gophers are led by Rachel Banham who broke the Big Ten career scoring record and is looking to keep her career going and finally get a trip to the NCAA tournament, something that will probably require Minnesota to make it to at least Saturday. It is not clear if Maggie Lyon will be back for the Wildcats, with her their chances of pulling off the upset are slim, without her they are practically non-existent.

The afternoon session tomorrow starts with 7 seed Nebraska taking on 10 seed Rutgers. The home team won both of the regular season meetings between these two teams by double digits. Neither of those games were high scoring and I expect that trend to continue in this one. Both teams were uneven down the stretch so expect a close but probably ugly game.

The final game tomorrow sees 6th seeded Purdue taking on 11th seeded Penn State. The Boilermakers are on the bubble for the NCAA tournament and need to win this one to stay there. Purdue won the only regular season meeting between these two teams, in Happy Valley, and are on a three game winning streak while PSU will have to play with little rest.