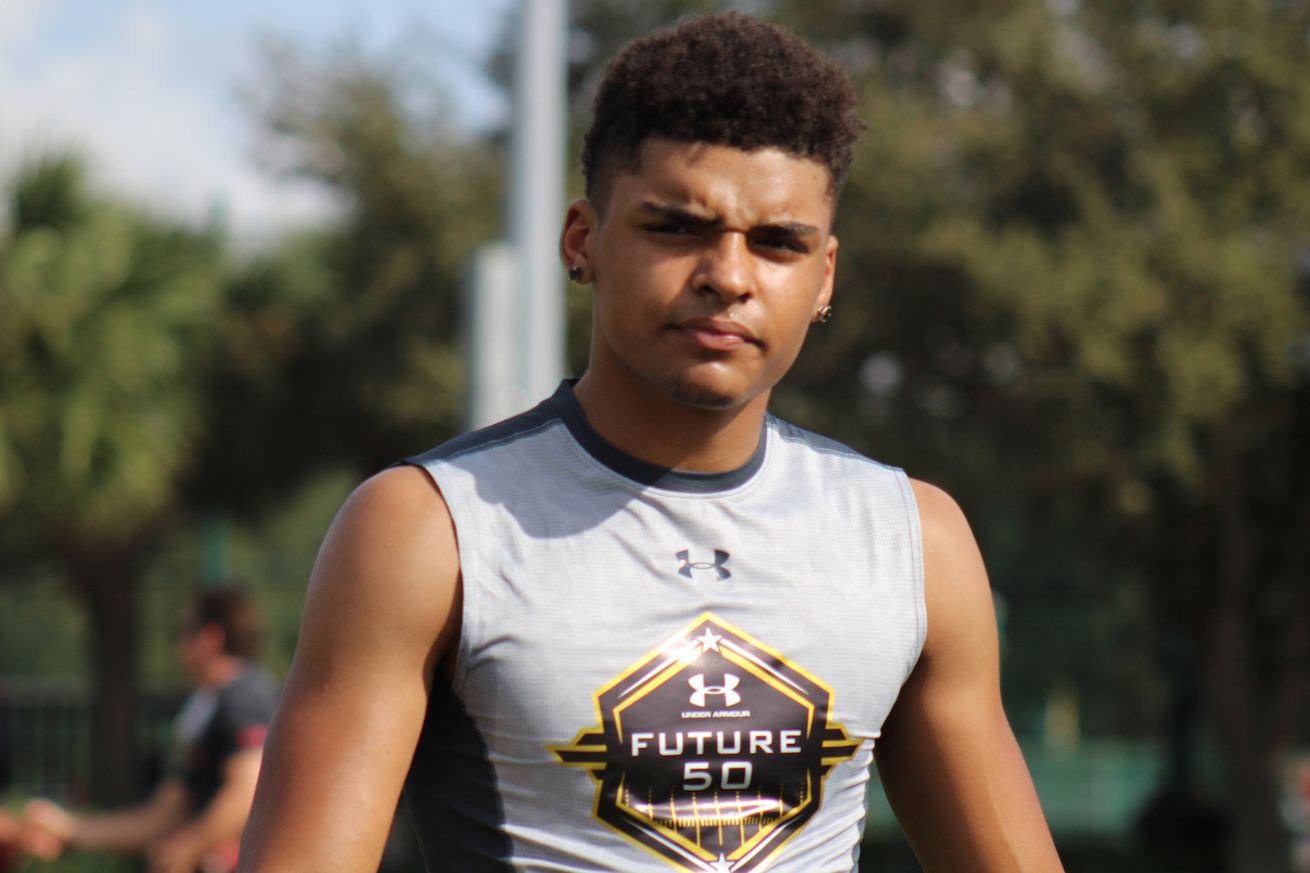 The list just keeps on getting longer for FNL

Despite being in the middle of a dead period, college football recruiting is in full swing. This past weekend was the annual The Opening camp held at the Nike headquarters in Oregon and multiple Ohio State commits shined at the prestigious camp. There were also some important recruits the Buckeyes have targeted throughout the recruiting process that participated in the camp, including a five-star wide receiver who continues to express interest in the Buckeyes.


Trevon Grimes (Fort Lauderdale, FL / St. Thomas Aquinas) has continually gone out of his way to list Ohio State as his favorite program. The camp provided the five-star WR to spend time with recruits already committed to Urban Meyer's football program –and he will have another chance to do so again, shortly.

Monday afternoon, Scout.com announced that Grimes confirmed he will be in attendance for this year's annual Friday Night Lights camp at Ohio State. Urban Meyer brought the camp with him to Ohio State, a tradition he started while at Florida, which has since grown into arguably the biggest recruiting event held at The Shoe.

The 6-foot-3, 202-pound WR has long been a favorite to commit to Ohio State and he has never shied from dropping hints as to his favoritism. This trend continued over the weekend when he threw up the Block O with his arms while posing for a picture for SBNation.

— SB✯Nation CFB (@SBNationCFB) July 11, 2016​
Grimes is one of four WRs recent QB commit Tate Martell (Las Vegas, NV / Bishop Gorman) has been recruiting since officially becoming a Buckeye. Grimes could easily wait until National Signing Day to announce his commitment to ensure he is making the choice he feels is best, but the elite WR could be on commitment watch July 22, the day of this year's FNL camp.


Meyer has been hard at work putting together what could end up being the best recruiting class in Ohio State history. Already sitting at the top spot in the the recruiting rankings, Ohio State made the cut for the best safety in 2017.

Jeffrey Okudah (Grand Prairie, TX / South Grand Prairie) has long been connected with the Buckeyes football program. Making it no surprise that late Monday afternoon, when Okudah announced the list of his top 6 programs, Ohio State made the cut.

Joining Ohio State on the list were Clemson, Florida State, Oklahoma, Georgia and USC. The 6-foot-2, 190-pound safety has made multiple visits to Columbus, Ohio in the last few months and the Buckeyes sit as the favorite to land him in the 247Sports Crystal Ball predictions.

The Buckeyes already have two commits at the position for 2017 in Brendon White (Powell, OH / Olentangy Liberty) and Isaiah Pryor (Bradenton, FL / IMG Academy), but rest assured Meyer would do whatever is necessary to make room for Okudah in the class.


Thank you to everyone who has supported me along my journey! #GodisLove pic.twitter.com/tCi9ad7gwu


As previously mentioned, five-star QB commit Tate Martell has been hard at working trying to bring in more elite prospects to the already No. 1 recruiting class at Ohio State. Martell has been mainly focusing on WR's and he has four in particular that he would like to see play with him in Columbus next season, with the aforementioned Grimes and five-star WR Tyjon Lindsey (Corona, CA / Centennial) being the two more likely to choose to play for the Buckeyes. Lindsey is a former teammate of Martell's and the two could look to reunite in the future.

However, Martell isn't the only Buckeye commit working hard to build on the 2017 class. His current and future teammate, four-star defensive tackle Haskell Garrett (Las Vegas, NV / Bishop Gorman) and five-star offensive lineman commit Wyatt Davis(Bellflower, CA St. John Bosco) were both out working the recruiting trail over the weekend at The Opening.

Both linemen spoke with Scout.com about who they were working on trying to get to join them at Ohio State next year and both sounded confident. Garrett mentioned the No. 1 DT in 2017, Marvin Wilson (Bellaire, TX / Episcopal,) as one of the guys he has been focusing on, as well as five-star DE's Xavier Thomas (Florence, SC / Wilson), Chase Young (Hyattsville, MD / DeMatha Catholic) and four-star DT Jay Tufele (South Jordan, UT / Bingham.) All four have offers from the Buckeyes and would make great additions to the class.

Davis made sure it was known that he was also out recruiting some of the best players to join him at Ohio State. He mentioned current teammate, Jaiden Woodbey (Bellflower, CA / St. John Bosco) as the main recruit he has been talking to. Woodbey is a four-star safety in the 2018 class and will likely be one of the top safeties in his class. Davis did admit that Tate and Garrett were putting more work in recruiting talent to this class, though. Regardless, Buckeye Nation has to be thrilled with the way this class is shaping up.