LGHL 3 reasons for optimism about Ohio State in the NIT 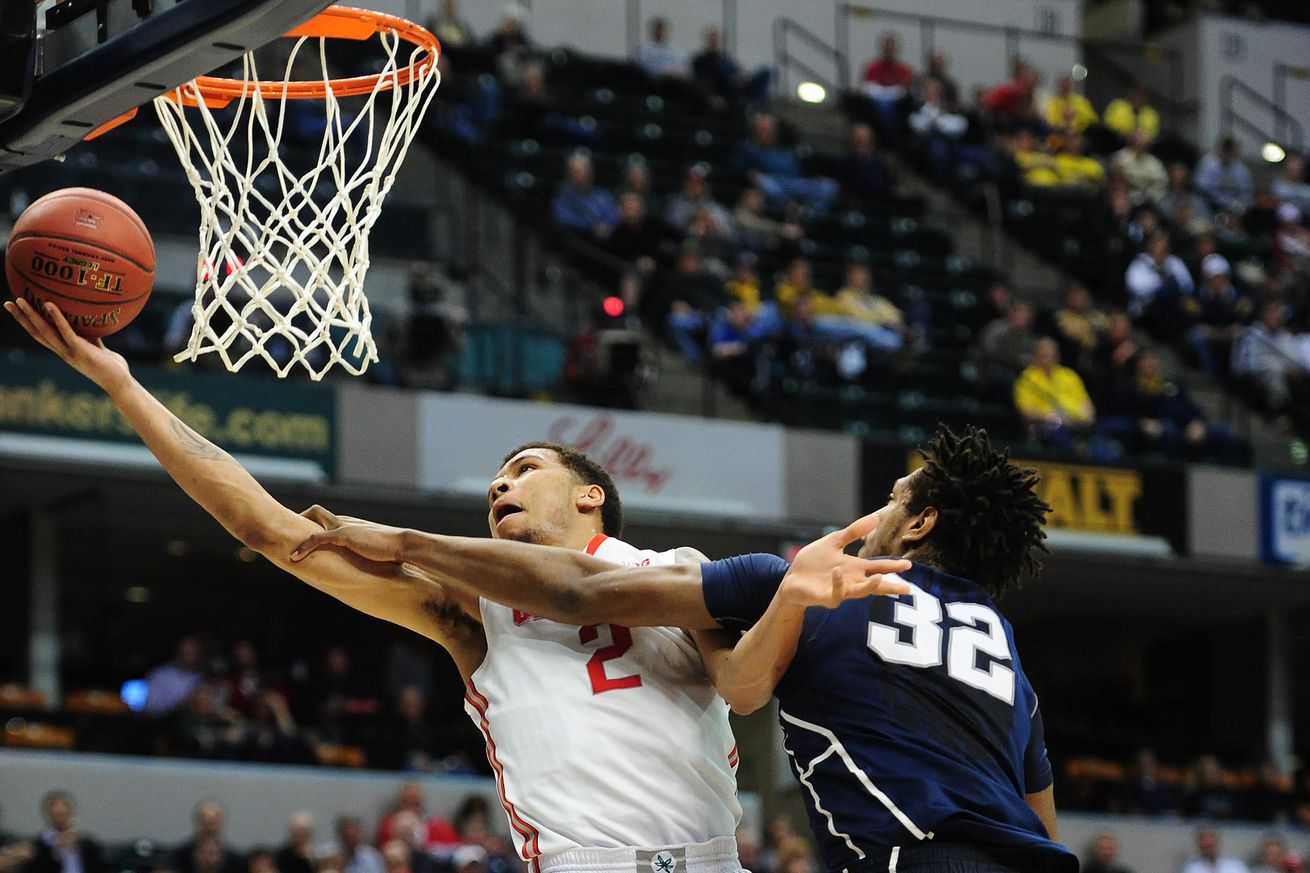 Don't give up on the Baby Bucks just yet.

INDIANAPOLIS -- Ohio State exited the Big Ten Tournament in an unbecoming manner on Friday, wilting under Michigan State's might and falling 81-54, thereby ending any hopes of a bid to the NCAA Tournament.

But, the National Invitation Tournament is calling -- post-game, Thad Matta would not fully commit to the Buckeyes playing in the NIT, but it would be a shock not to see them participate -- and there is still progress to made. Presenting three reasons for optimism for the (likely) NIT-bound Ohio State Buckeyes:

Believe it. Loving, the most popular source of consternation among Ohio State fans, has played tremendously since Tate was ruled out for the season on Feb. 23 because of a shoulder injury. As indicated by Loving's per-game averages before and after Tate went down, the junior swingman has proved to be indispensable.


Loving may be a lithe 6-7, but he is 6-7 nonetheless, and considering he owns the second-highest usage rate on the team behind JaQuan Lyle, Loving has the ball in his hands a lot. And whether he's shooting or driving, Loving typically towers over the opposition's wing players. Loving has put his height and improved handle to good use of late, creating contact in the paint and continuing to knock down his freebies at a high rate. (Loving shoots 79 percent from the foul line, the second-highest percentage on the team.)

The Buckeyes' lone upperclassman was asked about his uptick in production after Ohio State's win over Penn State on Thursday, and Loving credited an apparent shooting institution run by his coach.

"Coach Matta's shooting school. We do shooting school every day in practice," Loving said. "So just being able to knock down shots from good positions [that] JaQuan (Lyle) and A.J. (Harris) put me in."


Sweet-shooting Michigan State won't be playing in the NIT

The header is sarcastic, but the point is serious: the Spartans seem to bring out the worst in the Buckeyes. The average margin of defeat for the Scarlet and Gray in the two teams' three games over the past three weeks is just over 20 points, and frankly, the beatings have felt worse than that margin.

The Buckeyes are a solid defensive team -- out of 351 Division I teams, they rank 38th in KenPom.com's defensive efficiency rankings, 41st in opponents' field-goal percentage, and 82nd in scoring defense -- but there is one area Ohio State struggles with defensively: defending the 3-point line. The Buckeyes have allowed their opponents to shoot 34 percent from three this season (208th in the nation) and convert over six made triples per game (238th in the country).


The more the Buckeyes play, the better off they will be in the long run

This season was never about this season for Ohio State. The 2015-16 campaign was always about the 2016-17 and 2017-18 seasons. If Matta had somehow managed to guide a team of nine underclassmen to the NCAA Tournament, Gene Smith would have been forced to erect a bronze statue of Matta outside of the Schottenstein Center over the offseason.

Still, Ohio State stands to play at least one more game. That means we get to see how Lyle responds from his nightmare outing (five turnovers, one assist, one smashed water bottle) against Michigan State on Friday. We get to see more of Mickey Mitchell, who has gone from riding the pine for most of the Big Ten season to averaging nearly 23 minutes per game after assuming Tate's spot in the starting lineup. We get to see more of the foul-prone (3.2 fouls per game) and block-prone (1.5 swats per game) Daniel Giddens. We get to see if Trevor Thompson can respond after only grabbing a single rebound opposite Michigan State's burly front line.

Ohio State can worry about a return to Big Ten title contention and the NCAA Tournament next winter. This season, however long it extends, remains about the growth and development of the Baby Bucks.