Football: What we learned about Ohio State from the Spring Game Ohio State entered spring practice with one focal question: who will take snaps at quarterback in the fall? But it had many other questions to answer, including who will be snapping the ball to the yet-to-be-determined quarterback.

Here are five things we learned after the Spring Game.

Last season, Rashod Berry backed up Marcus Baugh. The now-redshirt junior Berry entered the spring with the first shot at replacing the now-graduated Baugh, but he could not hold off redshirt sophomore Luke Farrell.

“As of we finished spring practice, [Farrell will] be the starting tight end at Ohio State,” head coach Urban Meyer said following the Spring Game. “He had a very good spring.”

Despite the declaration of confidence, Meyer stopped short of declaring the former four-star prospect as the Week 1 starter. He said Farrell has earned the right to call himself the starter for now, but must retain the position in the fall. Berry, who did not play in the Spring Game due to suffering two “stingers,” and redshirt sophomore Jake Hausmann will make a run for the job.

But Farrell’s stiffest competition might come from incoming freshman Jeremy Ruckert. The second-ranked tight end in the 2018 class by the 247Sports composite rankings, Ruckert might be the most talented player at his position the moment he steps on campus.

No answer at linebacker, but that’s not necessarily a negative

The Buckeyes have an abundance of possibilities on the second level of their defense. Not only do they have many different players ready to step up, but many of their linebackers can play both inside or outside.

Though redshirt sophomore Tuf Borland suffered an Achilles injury early in the spring, he seems to be the only player expected to be in the starting rotation at middle linebacker. Baron Browning, Keandre Jones, Malik Harrison and Pete Werner each played substantial snaps in the Spring Game and have a shot to start. Dante Booker had shoulder surgery and missed spring practice, but will have a chance at reclaiming a spot. He’s started the opening week the past two seasons but lost his role due to injury each year.

Despite lacking a starter at two linebacker spots, neither defensive coordinator Greg Schiano nor Meyer seemed overly concerned about entering the summer without much clarity.

“I think the hard thing is going to be to decide who the three starting linebackers are. Because we’re going to move guys around to get the three best guys on the field to start the game,” Schiano said after the Spring Game. “I have a feeling that we may even be able to play more than three, the way guys have worked this spring. Now if they continue to excel, there’s no rule that says you can’t play more than three.”

The youthful group of linebackers could take a page from the cornerbacks and rotate more than the three starters.

The past two centers at Ohio State — Billy Price and Pat Elflein — won the Rimington Trophy, awarded to the best center in the nation. Though Price’s replacement will not be expected to be the country’s best, a precedence of excellence has been set.

After the Spring Game, Meyer revealed his decision on who will have the first shot in the fall with the first team.

“Brady Taylor is leaving spring ball as our starting center,” Meyer said. “I’m not saying that’s the way it is for the fall yet, but it’s pretty close. He did very good.”

A redshirt senior, Taylor has a wealth of experience. Early in spring practice, Meyer expressed concern about the center position, but Taylor played well enough for the head coach to make the decision of Taylor over redshirt freshman Josh Myers by the end of camp.

See all the videos: https://www.elevenwarriors.com/ohio...-alex-grinch-and-more-wrap-up-spring-practice
Upvote 0 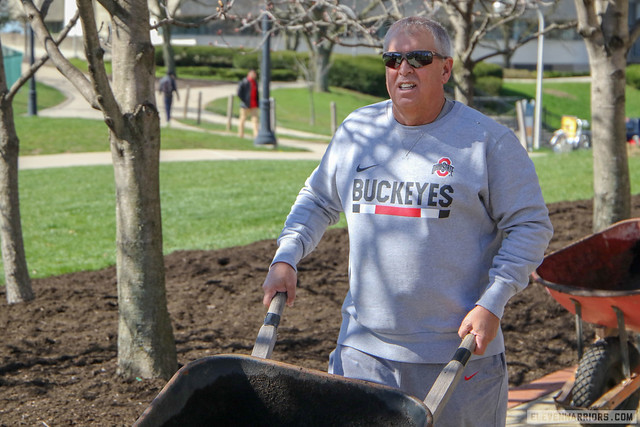 What position did he (Tim Hinton, Executive Director for Football Relations/Special Assistant to the Head Coach) play?..... 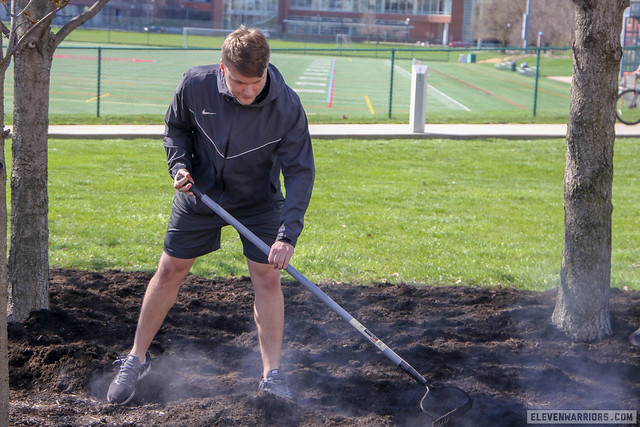 Didn't Sean kick for both sides? 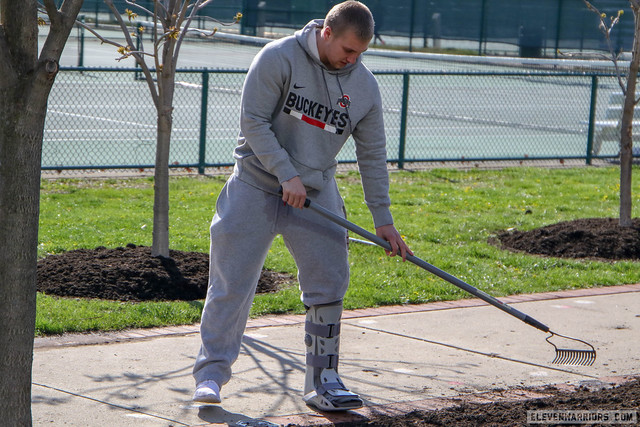 and Tuf didn't even play in the game.

Defensive coordinator Greg Schiano, defensive end Nick Bosa and safety Jordan Fuller were among the dozens of coaches and players to help clean up the iconic plot of land where the Buckeyes plant trees to honor all-Americans.

All the pictures: https://www.elevenwarriors.com/ohio...tates-scarlet-squad-landscaping-buckeye-grove
Upvote 0

Hetuck said:
To win a championship a QB has to do more than run the wildcat. My opinion of Martell hasn't changed. If he has a future in football it's not at QB. He'll eventually switch positions.
Click to expand...