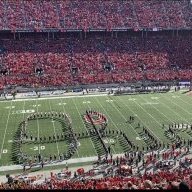 You're 'bout as messed up as a football bat! · From In a weekend state of mind